It was a career to remember for Georges St-Pierre, the Canadian icon who announced his retirement today at the age of 37. How memorable? We’ve got ten reasons below.

Now this is what you call a debut. Despite going 5-0 on the Canadian scene, defeating Ivan Menjivar, Thomas Denny, and Pete Spratt in the process, St-Pierre wasn’t the fighter with all the hype behind him heading into this UFC 46 bout. It was judo wizard Parisyan, whose own UFC debut a few months earlier saw him dazzle fans with his grappling before submitting Dave Strasser. But this was GSP’s night, and as I wrote that night, he pretty much controlled matters from the start. “Effectively working his striking game while in Parisyan’s guard, St-Pierre pounded his foe throughout, bloodying him in the process.  The courageous Parisyan had his moments in the bout as he attempted to secure a submission lock on the Canadian, but St-Pierre’s strength and ring savvy allowed him to stay out of serious danger and easily take the bout on the scorecards.” This was just the beginning.

It was a purist’s dream match, and it lived up to the hype, but after the first round ended, not too many people would have bet that St-Pierre would emerge victorious. “That first round (against Penn) was the worst round of my life,” admitted GSP after the bout. “Actually, if you look at my career, I had never lost a round against anybody (to that point). Even when I fought Matt Hughes, the judges thought I was ahead – I asked them if they would have given me the round. So this round (against Penn) was the only round I lost.” GSP more than lost it; he was bloodied and battered by the crisp standup of Penn, and many wondered if he would fold. He didn’t, showing the heart of a champion in roaring back and taking the next two rounds and the decision. It was the gut check moment all fighters have to go through, and St-Pierre passed with flying colors. “It just proved to everybody that I’m a lot stronger mentally than when I fought Matt Hughes,” he said. “I’ve been able to come back after a beating and get the victory. I think that’s the difference between a champion and a guy who will always be tough, but will never be a champion. You can be as skillful as you want, but if you don’t have the mental toughness, you’re not going to go anywhere, and in our sport, sooner or later, you’ll need that to win a fight.” 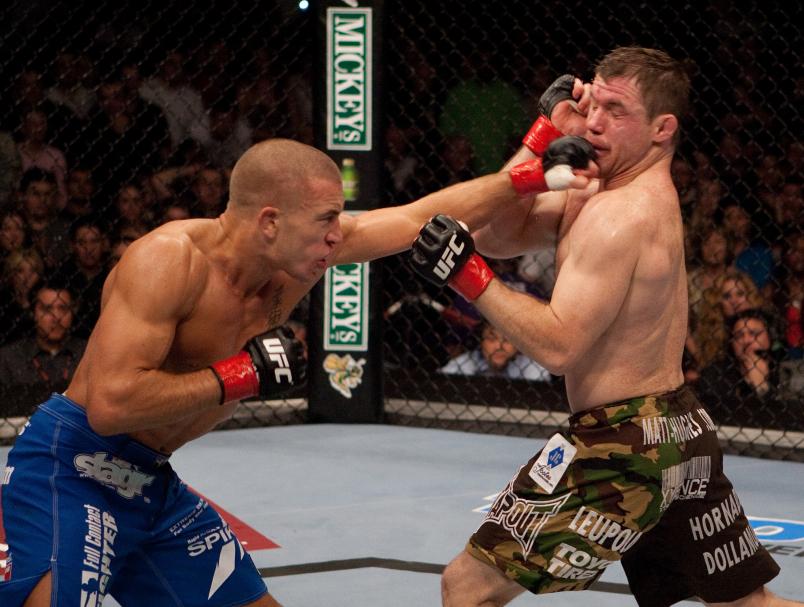 St-Pierre more than earned a second title shot at the first man to beat him, Matt Hughes, after five straight wins against top-notch competition, and he was a different fighter than he was two years earlier. Hughes, one of the strongest fighters ever to step into the Octagon, found that out early on when he tried to lock the challenger up and St-Pierre tossed him away with little if any effort. By round two, the result was academic, and when the Montrealer dropped Hughes with a kick to the head in round two, seconds later a new champ was crowned. It was expected to be a reign that would last for as long as St-Pierre wanted it to. But you know that old adage about the best-laid plans of mice and men, and just five months after this monumental win, GSP was knocked out by Matt Serra in one of the biggest upsets in UFC history.

This may have been the most important fight of St-Pierre’s career. After the loss to Serra, the whispers were that GSP was ultra-talented but didn’t have that extra something to be great. It shows you how soon people forget the way he came back against Penn or dominated most of the 170-pound division on the way to the title. St-Pierre kept quiet and went about his business, determined to teach all the skeptics a lesson. The lesson he taught in dominating wrestling ace Josh Koscheck at UFC 74 was that you can’t keep a good man down, that he was back, and that he wasn’t going anywhere. 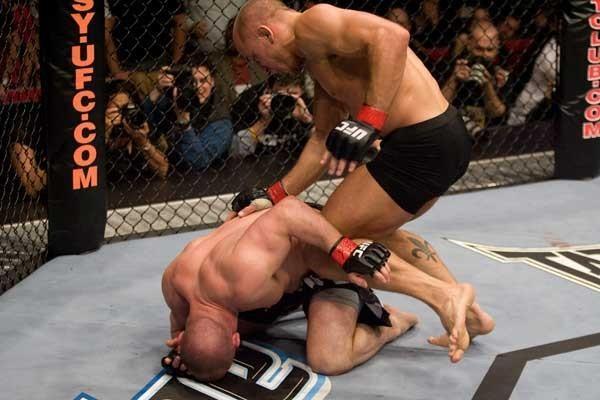 If GSP was going to crack under the pressure, this was the night to do it. Not only was he facing the man who knocked him out, but he was doing it in his hometown of Montreal, where fans packed the Bell Centre just to see their hero in action. Well, he didn’t disappoint, stopping Serra in the second round with a disciplined and dominant attack. “The pressure was there,” he said. “But I’m at my best when I perform under pressure – it keeps me sharp and aware of what can happen and what is on the line.”

To this day, St-Pierre calls this five round scrap with number one contender Jon Fitch the toughest fight of his career. And with good reason. Going the championship distance for the first time, St-Pierre had plenty of success early, but as the bout progressed, it was clear that Fitch wasn’t going anywhere. The judges didn’t see fit to give Fitch any rounds on the scorecards, but anyone who witnessed the fight knew that it was anything but a 50-44, 50-44, 50-43 blowout. Fitch tested St-Pierre’s mettle as a champion, and GSP passed that test with flying colors. 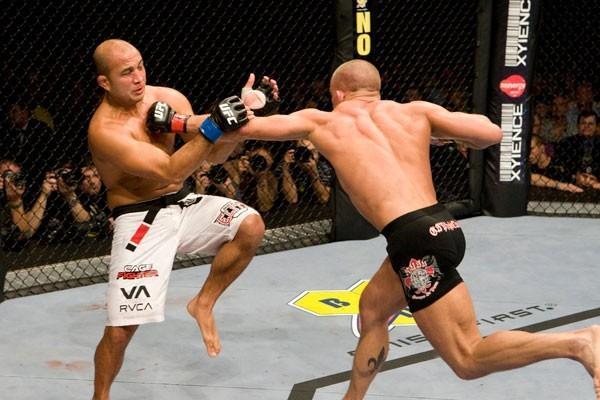 Nearly three years after their first bout, St-Pierre and Penn locked horns again in THE superfight of 2009. Only this time, it wasn’t a 15 minute back and forth war. The second time around, St-Pierre, bigger and stronger than Penn – who was coming up from 155 pounds for the bout – was in control for four rounds until the Hawaiian’s corner decided that they had seen enough and halted the fight before the final stanza. After all the bad blood and trash talk before the match, it was one of St-Pierre’s most satisfying victories and one that entrenched him in the upper reaches of the mythical pound for pound list. It’s a spot that he hasn’t come close to giving up, four fights and four wins later.

GSP didn’t slack off after the win over Penn, scoring dominant victories over Thiago Alves, Dan Hardy, and Josh Koscheck (in their rematch) and making it clear that at 170 pounds, there was only one true king. Jake Shields’ 15-fight winning streak and worldwide reputation was expected to put that idea to the test, but before a record crowd of over 55,000 in Toronto, St-Pierre did it again, putting on a five round clinic against Shields en route to another lopsided win.

Many observers wondered what effect a nearly 19-month layoff would do to St-Pierre, especially considering that the time off was to rehab a torn ACL. They didn’t need to worry, as St-Pierre was in prime form against interim champion Carlos Condit. And while the final scores of 50-45 (twice) and 49-46 would make you think it was a one-sided bout, Condit was competitive and dangerous throughout, especially when he dropped GSP with a head kick in the third round. This was top-level championship action, and no fan left Montreal’s Bell Centre disappointed. 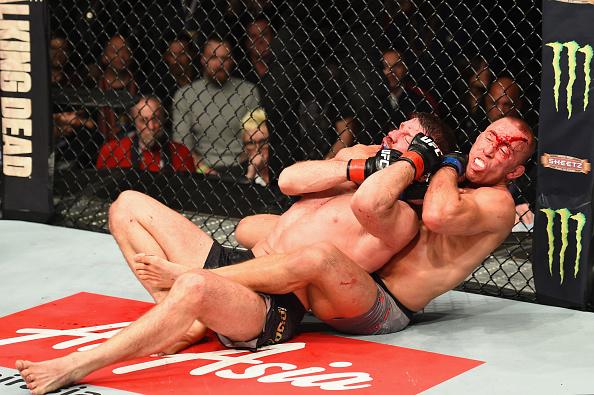 For a few moments in Madison Square Garden, it was 2013 all over again, as two-time welterweight champion Georges St-Pierre returned from a nearly four-year layoff to submit Michael Bisping in the third round, take the UFC middleweight title and become only the fourth fighter in the promotion’s history to hold titles in two weight classes.

“It’s my dream come true,” said St-Pierre, who took a hiatus from the sport after his November 2013 win over Johny Hendricks. The November 2017 victory, his 13th in a row, put him alongside Daniel Cormier, Conor McGregor, Amanda Nunes, BJ Penn and Randy Couture as the UFC’s two-division champs and added to his legend as one of the best to ever strap on the gloves.