The only definite plans Georges St-Pierre has for the immediate future are to go on vacation; everything else is still up in the air.

Just a few days removed from his middleweight title victory over Michael Bisping, the French-Canadian superstar was bombarded with questions about what he’ll do for an encore during a media conference call on Thursday. After slipping the question when asked by Joe Rogan inside the Octagon following his triumphant return at UFC 217, St-Pierre continued to be noncommittal about his next step, much to the chagrin of the assembled media on the line. 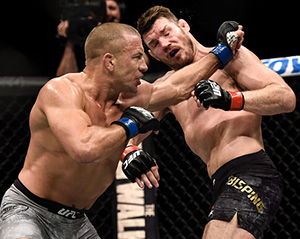 “I’m going on vacation to forget about fighting, to not think about it,” said St-Pierre when asked about his preferred return date. “It’s not my job to think about that – it’s the UFC and my agent. They’re gonna talk about it and see what the next move is.”

While the 36-year-old champion refused to provide a location, date and opponent for his next fight, St-Pierre did provide some insights about his future plans that at least offer a glimpse into how things could shake out in the middleweight division going forward.

As he had done prior to his bout with Bisping, the Saint-Isidore, Quebec native explained that his contract stipulates that his next fight has to be against Robert Whittaker, who claimed the interim middleweight title in July and was in attendance for last weekend’s momentous event at Madison Square Garden.

“Robert Whittaker is in my contract,” explained St-Pierre, who extended his winning streak to a baker’s dozen with his third-round submission win over Bisping last Saturday. “If I want to fight again, it has to be against Robert Whittaker at 185.

“I cannot go fight, for example, Tyron Woodley or go fight another guy. My contract – if the UFC does not want me to fight anywhere (else) – I have to fight Robert Whittaker; that’s the term of my contract.”

St-Pierre laughed when asked about potentially facing the Australian standout on his home turf early next year, appreciating the persistence of the media when it comes to mining details about his plans and their ability to reframe questions on the fly, but he remained mum on the specifics. 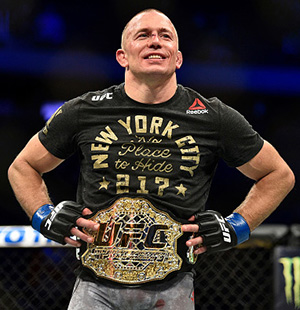 The one thing the now two-division UFC champion was clear on, however, was his desire to not leave Whittaker and the host of contenders that have been patiently waiting for the dust to settle following UFC 217 in order to get a better idea of where the division is heading idling on the sidelines for an extended period of time.

“For sure what I don’t want to do – I know that the title has been on hold for a long time and that’s not my intention,” he said. “I know there are other guys in line – Luke Rockhold, Whittaker and all these guys, they have a family to feed and it’s not my intention to put everybody on freezing. That’s not what I want to do.”

For now, it seems like not even St-Pierre is certain what the next step in his historic career will be.

Coming back from his four-year sabbatical and becoming only the fourth man in UFC history to win championship gold in two weight classes has been his sole focus for the last year and now that he’s accomplished that feat, all the middleweight champion wants to do is take a well-earned vacation.

“I’m going on vacation now and Dana White is gonna talk with my agent,” said St-Pierre. “They’re gonna figure out and we’ll see after I come back from vacation what I want to do, where my head is and see what’s gonna happen.

“Like I said, I have no intention of holding on (to) the belt and freezing the whole division – that’s not what I want to do – so you guys are gonna be up-to-date soon.”