Georges St-Pierre - The Return of the Saturday Night Superstar 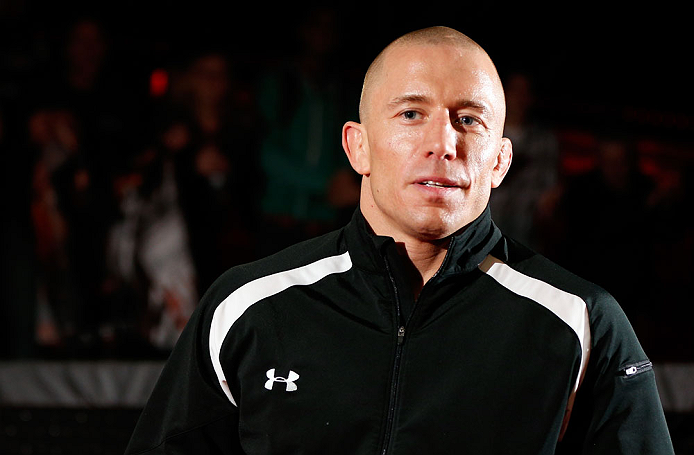 For the last 19 months, it seemed like the whole world missed Georges St-Pierre. The UFC missed one of their biggest stars, Canada one of its favorite sons, and the fans one of their most revered fighters. That’s not even mentioning the welterweight contenders who waited in line for a shot at dethroning the 170-pound champion.

But perhaps no one missed seeing St-Pierre heal up from a torn ACL in his right knee and return to the Octagon than GSP himself. And to think, he didn’t know how much he had until it was almost taken away.

“When you get hurt and you can’t fight for a long time, you realize how you miss it,” St-Pierre explained during a recent media teleconference. “It’s a little bit like when you’re in love with your girlfriend. When you’re with her every day, sometimes you don’t realize you love that person. But when you’re away from her for a long time, you realize that you really love that person because you missed her. The fact that I got hurt and was away for so long and I had to change my routine and everything to make my life more efficient, now I’m really pumped up. I’m very happy to be back and I realized that I missed it a lot and really enjoy doing it.”

That wasn’t always the case, as St-Pierre’s dominance eventually left him burned out and looking forward more to a post-fight getaway than to the fight itself.

“I felt like I lost the fire,” he said. “I used to finish my training camp and I’d be burned out. Before I used to be like ‘oh, I can’t wait to be on vacation, I’m tired.’ And I used to say that all the time.”

You almost couldn’t blame him. As the face of the sport not only in Canada, but worldwide, St-Pierre’s seemingly endless string of obligations left him seeking refuge in the Tristar Gym in his native Montreal, and when he would emerge from camp to fight, he was barely being tested. And he wasn’t fighting stiffs either. From the time of his last loss to Matt Serra in April of 2007, GSP fought and won nine times, defeating the likes of Josh Koscheck (twice), Matt Hughes, Serra, Jon Fitch, BJ Penn, Thiago Alves, Dan Hardy, and Jake Shields. In those nine fights, he lost a round or two only against Koscheck and Shields. Not a fight, a round.

It could be said that his four year run was more dominant than that of fellow pound-for-pound list entrants Anderson Silva and Jon Jones, mainly because he never faced any serious danger during that span. Silva had Chael Sonnen in their first fight, Jones had Vitor Belfort early in their September clash. St-Pierre had no one put him on the brink of defeat, yet when you ask fans or pundits about those nine fights, GSP will be criticized for only finishing three of the nine. It’s criticism that hit close to home for the champion.

“I need to listen to the critics and I want to jump more on opportunities when I have the chance to finish,” he said. “That’s what I’ve been working a lot on. The critics are there to make me better. I don’t take it only as a negative thing. But I’m very happy with the Jon Fitch fight and the Thiago Alves fight. Maybe one fight I’m not happy with was my last one with Jake Shields. I didn’t look good and I’m sure I could have done better.”

Absence does make the heart grow fonder though, and most of the people taking potshots at St-Pierre when he was healthy clamored for his return once he went down with the ACL injury last December. And as the long and arduous rehab process began, the 31-year-old realized just how fragile a life at the top in pro sports can be. But as his nature, he doesn’t moan about his fate over the last 19 months.

“You realize that the most important thing in life is health, not the money, the love, or anything you can have,” he said. “And I don’t complain. People try to make a big deal out of it, but I’m lucky. The way the UFC treated me for the rehab was amazing. They helped me find the best surgeon possible, I went to the United States, they took care of me, and for six months I had the best rehab people, the best surgeon. What athlete in any sport has that? It’s very rare that an athlete has the chance to be treated like that, so I don’t complain. Yes, it’s bad luck, it’s an injury, but I can’t cry. Some people don’t have money, they’re in a wheelchair, they can’t walk. Me, I had an injury but I do what I love for a living and I’m back a hundred percent. I’ve been treated like a king and I’m privileged.”

Now all that’s left is for the king to defend his throne against Condit, who took the interim crown in February with a decision win over Nick Diaz. When asked about “The Natural Born Killer,” GSP gives perhaps the best description of the Albuquerque native’s style to date.

“He’s a very smart fighter, he loves to create chaos, and from the chaos he creates his opportunity,” said St-Pierre, who is an expert in diffusing chaos with the least amount of mess necessary. He can do it with his takedowns and ground control, or behind a stiff jab while standing. Either way, he has made it a point to stay in control, even though he admits that before every fight, he gets the butterflies in his stomach.

“I’m always scared,” he said. “I can play the tough guy and say ‘I’m gonna go there and beat up that guy.’ But it’s not true. Every time I step into the Octagon I’m scared to lose, scared to disappoint the people that helped me out, scared to have done all this hard work for nothing. I want to have the win and I want to win in good fashion, and there’s only one guy who’s gonna win on November 17th. And it’s gonna be him or me. But I work very hard and I try to control things that I can control and that’s the only thing I can do. The outcome will take care of itself.”

So it’s not surprising that when asked about a potential Superfight with Silva, who is expected to be in attendance in Montreal this weekend, St-Pierre’s response was quick and to the point.

“I don’t care about Anderson Silva, he can do whatever he wants. He can go to Florida or stay in Brazil if he wants. I’m focusing on Carlos Condit. That’s all that matters to me.”

It’s a retort created from the last time he looked too far ahead and found himself on the receiving end of a knockout from Serra. St-Pierre learned his lesson that night in Texas, and he hasn’t made the same mistake again. And he’s not going to start now. In fact, he’s learned to excel in the midst of the craziness that can surround one of the best fighters in the world.

“I always have pressure,” he said. “That’s one of the reasons everyone is calling me out for fights. They want to make money, they want to make the Pay-Per-View. So the importance for me is to take one fight at a time and focus on the present moment, and that’s what I’m doing right now.”

He may have been gone for 19 months, but now that he’s back, everything feels familiar again. That’s the good news for Georges St-Pierre, and bad news for Carlos Condit.