10 years ago, the UFC made history.

The Octagon touched down at the Rogers Centre in Toronto for an action-packed card headlined by Canada’s own Georges St-Pierre. The event shattered UFC’s attendance record at the time with over 55,000 fans and was the UFC’s first ever stadium show.

St-Pierre would go on to defend his title against Jake Shields by unanimous decision and continue his reign as the welterweight king of the world. 10 years later, and with multiple title defenses and epic performances behind him, St-Pierre is considered one of the greatest fighters (if not the greatest fighter) to ever step inside the UFC Octagon.

But despite all that he experienced in his storied career; nothing was quite like that night in Toronto.

Here’s what GSP had to say about the event as he reflects on everything that transpired at UFC 129. 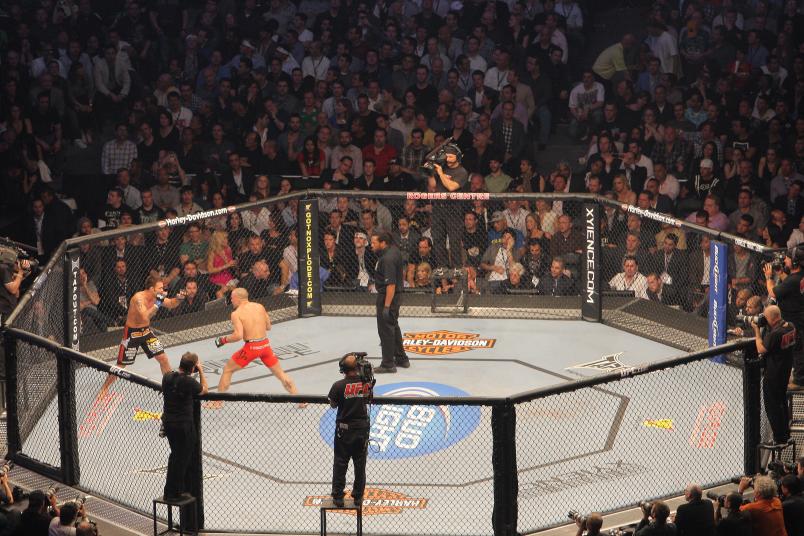 “UFC 129 was a very memorable thing for me because it was the biggest crowd that I have ever performed in front of. It set a record for me and a record in Canada for the UFC,” St. Pierre told UFC.com. “The UFC had the audacity to do something that had never been done before and that’s what I like about the UFC. They are about pushing the limit, like a fighter’s mentality.”

St. Pierre’s mentality heading into the bout was slightly different than usual, as he found himself putting extra pressure on himself to knock out Jake Shields. He wanted to have an incredible performance for the 55,000-plus fans that were on their feet and he felt a surge of energy unlike anything he’d felt before.

Thanks to that pressure, “Rush” believes he wasn’t able to finish Shields that night.

𝐋𝐄𝐆𝐄𝐍𝐃𝐀𝐑𝐘!!#OnThisDay 10 YEARS AGO: @GeorgesStPierre and Jake Shields headlined the first UFC event in Toronto, and the company's first ever stadium show 🇨🇦🏆

“When the guy came to pick me up from my locker room to make the walk to the Octagon, I remember I went in the hallway and I saw how big the attendance was. It was amazing, I’ve never seen anything like this before for a fight, but it didn’t matter to me because I already I had in mind what I had to do. I wanted to go out there and give the fans a big knockout, but it didn’t matter. The pressure was because I put it on myself; I never let something from the outside, so to speak, try to interrupt my mindset. It was my fault if I put pressure on myself,” St-Pierre said.  “At UFC 129 I felt like I had a little extra pressure to perform, and I wanted to give the fans a big knockout and that’s what I wanted, but sometimes it’s not a good thing when you let your emotions take over. When you want the knockout, it doesn’t happen. It happens when you’re quick and loose. I think that’s one of the reasons it was a bad day in the office for me. I won, but it was a bad day, and I got an injury to the eye and I was blind for about half the fight. I won the fight, but I wish I would have given more to the fans.”

That doesn’t mean that St-Pierre wasn’t close to that storybook KO. He nearly had Shields with a head kick in the fourth round of the bout. The best part is that St-Pierre didn’t think the kick would find its mark. He was just throwing it to measure the distance.

“I remember at one time I threw a kick at the head of Jake Shields but when I threw that kick it was more of a fake. I threw the kick just as a measurement sort of kick. So, I touched Jake Shields on the temple, and he fell down and I didn’t put enough strength on it because I didn’t believe it would touch the target; I thought he would adjust to help me measure my distance,” St-Pierre recalled. “But when I look back on that sequence, I’m like, man, I should have put more strength into that kick and perhaps I would have gotten my knockout. Unfortunately, it didn’t happen the way I wanted.”

It may not have gone perfectly, but the fans inside Rogers Centre definitely enjoyed the show and were treated to an incredible event.