"When you’re the champion, you’re the target and everybody wants what you have, so I’ve started to get used to it." - Georges St-Pierre 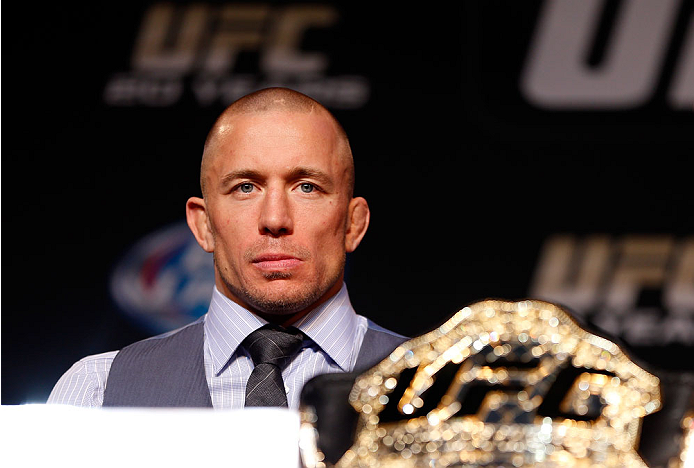 When you ask Georges St-Pierre for his scouting report on the man he’s fighting in the main event of UFC 167 this Saturday, Johny Hendricks, it’s frightening, especially when you’re the one fighting him.

“He has a very dangerous left hand, he’s a great wrestler, he’s very explosive, very strong physically, and he’s a very smart guy too,” said the UFC welterweight champion of his challenger. And that’s intimidating enough, but GSP isn’t finished talking about Hendricks. “He fights smart, he has a great team behind him, and he’s gonna get in great shape and be very well-prepared.”

Okay, is that all? Nope.

“He’s got great determination and a lot of heart,” continues St-Pierre before throwing in his finishing shot. “But I believe I’m better and I’m gonna fight the best fight, and that’s why I’m going to win.”

That’s why he’s the champion. It’s also why in the six-plus years since his last loss to Matt Serra, despite facing challenger after challenger who had so many of the aforementioned attributes, he’s remained untouched, winning 11 straight bouts, all but one of them with a title on the line. For GSP, this is just business as usual. > Watch: St-Pierre submits Matt Hughes

“It’s always the same song that comes back all the time,” he said. “It’s the new guy with the new threat bringing new challenges and it’s the same thing – it’s like a mathematics problem. I’ve been doing mathematics for a long time but I have a new problem to solve and I’m going to solve it the best I can.”

Maybe we can start calling him Professor St-Pierre from now on, because no one has been a better problem solver over the years than the Montreal native. From Serra and Hughes to Condit and Diaz and every other big name at 170 pounds in between, the 32-year-old is coming perilously close to cleaning out the division, but he remains not just focused, but motivated to continue on this path.

“Fighting on this stage at the highest level for the world title in the most prestigious organization in the world, the UFC, against Johny Hendricks, the most dangerous guy that I ever fought, a guy that has crazy knockout power, I think it’s pretty exciting for me,” he said. “I don’t need anything more to get me excited; it’s actually the most exciting thing in my life.”

That’s not something you usually hear from someone who has been on top for as long as St-Pierre has, because being dominant can come with a price tag entitled complacency. But with the champion barely losing more than a couple rounds since he regained his title from Serra, he shows no signs of slowing down. So what keeps this fresh for him? > Watch: St-Pierre and Hendricks on UFC Primetime

“The reward from the fight and what you gain from it,” he said. “The fight itself can put you in pain, but I think it’s the release of pain when you win that makes you happy. The feeling is indescribable.”

Is that an addictive feeling?

“It’s kind of addictive,” he admits. “That’s the reason why you’re doing it, and it’s amazing. You like to 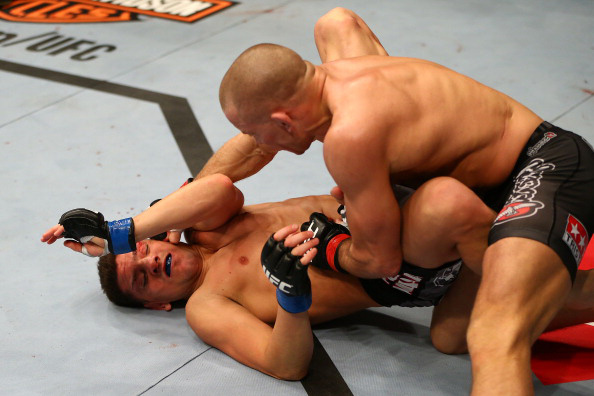 Hendricks is a big risk, maybe the biggest GSP has faced as champion. It’s why fans around the world have made UFC 167 one of the most talked about events of the year, but for the champion, he has to make it just another night. That’s life at the top, life as the man everyone in the division wants to take down. Now that part of things is tough for St-Pierre, perhaps the only thing.

“When you’re the champion, you’re the target and everybody wants what you have, so I’ve started to get used to it,” he said. “It’s uncomfortable though. I don’t like when people treat me bad and say bad stuff about me, but it’s part of the game.”

A game St-Pierre has seemingly mastered, one mathematical problem at a time.