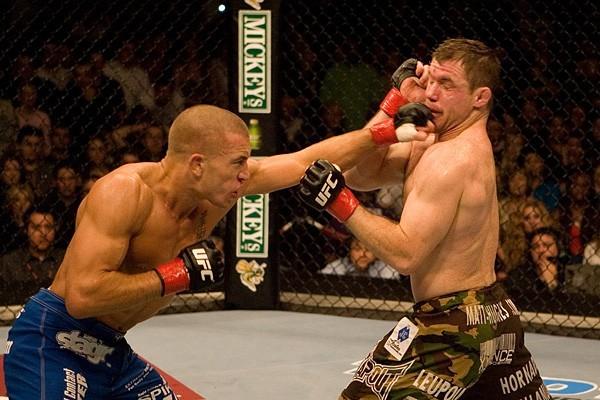 Available now on the UFC’s digital streaming service, this month’s edition of Fightography sees GSP give a brutally honest account of his personal journey from a bullied teenager in his native Montreal, all the way through to his triumph over Matt Hughes to become UFC champion in November 2006.

With the candor that typifies the monthly Fightography series, the Canadian icon is brutally honest in revealing that he was actually afraid to fight Hughes in their first title bout at UFC 50 in October 2004. Georges was an undefeated hot prospect at the time, but had only fought in the Octagon twice before – on both occasions in the opening bout of the night. He didn’t expect – or want – the call that he was next for a champion who had smashed his way though a who’s who of the division and appeared virtually unbeatable at the time.

“I didn’t want to fight Hughes at UFC 50,” GSP admitted. “I was like ‘Matt Hughes? Oh sh*t! I am not ready!’ To me, Matt Hughes was this giant, the greatest of all time, he was so huge in my mind I could not imagine defeating him. But I felt like I had no choice but to take the title fight. Who turns down a title fight? They may never offer me another shot in my career if I say I don’t want to fight for the belt. So I was forced to take a fight I felt for sure I could not win.

But, as long time fans will recall of that October night 13 years ago, the Canadian challenger acquitted himself very well in his first UFC title chance. Not only did GSP take the vastly more experienced champion down, but he also landed a spinning back kick and several other flashy strikes which hardly bore the hallmarks of a fighter seized by fear.

“I was fighting in a state of shock,” St-Pierre recalled. “I was operating 100% on muscle memory and instincts. I wasn’t thinking about what I wanted to do in the Octagon, I was operating 100% on instinct. My training took over, the hours and hours of repetition, but that is why I made a mistake. Matt went from a kimura (attempt) to a armbar. I didn’t think ahead at what he was doing and he got me. If I was mentally in the fight, I could have seen that coming, but I was fighting just on reaction.”

After tapping in out in the waning seconds of the opening round, GSP finally was finally able to sleep at night.

At least for a week or so.

He explained: “After watching the tape, I realized I was doing very well in the fight. Even though I had a bad camp, bad preparation, I did a lot of (good) things in the fight. I thought if Matt Hughes is up here at the top, then I just be very near to the top. With more experience – and nothing is as important in MMA as experience – I knew I could beat Matt Hughes. I was obsessed with getting the rematch.”

St-Pierre was back in the cage within three months – taking a fight outside the UFC just to keep busy, to keep improving – and then set off on a tear in the UFC, fighting his way back to Matt Hughes.

GSP went through Jason Miller, Frank Trigg and Sean Sherk before arriving at a No.1 contender match vs former champ BJ Penn. The Canadian emerged from a classic with a split decision win but said Penn was the first man to really beat him up in a fight.

The rematch was his. And at UFC 65 in November 2006, Hughes faced a very different Georges St-Pierre.

“I was confident,” GSP told UFCFIGHTPASS.com . “I knew I could beat him if I fought to the best of my ability. Matt Hughes wasn’t this giant ‘greatest of all time’ even though he was, in the Octagon he stopped being that and was just the man I needed to beat.”

GSP dominated the fight and – years after telling his family and friends he could do so – became the UFC champion.

He said: “I can’t describe the feeling. Becoming champion, beating Matt Hughes who was a legend and I was so afraid of the first time, that was the best feeling of my life. I learned so much of myself in those first two fights with Hughes. They were the two most important fights of my career.”

Fightography: GSP – the retrospective interview and all 20 of GSP’s UFC career fights – can be seen here now: http://www.ufc.tv/category/fightography-georges-stpierre