Georges St-Pierre Named To Hall of Fame Class of 2020

Las Vegas – UFC® today announced that former UFC welterweight and middleweight champion Georges St-Pierre will be inducted into the UFC Hall of Fame’s ‘Modern Wing’ as a member of the class of 2020. The 2020 UFC Hall of Fame Induction Ceremony, presented by Toyo Tires®, will take place later this year and will be streamed live on UFC FIGHT PASS®.

“Georges St-Pierre is a pioneer of Canadian MMA who helped build the sport globally,” UFC President Dana White said. “He is the most famous athlete to ever come out of Canada and one of the greatest martial artists of all-time. We’re proud to induct him into the UFC Hall of Fame Class of 2020.”

St-Pierre will enter the UFC Hall of Fame as a member of the Modern Wing, joining Forrest Griffin (2013), BJ Penn (2015), Urijah Faber (2017), Ronda Rousey (2018), Michael Bisping (2019) and Rashad Evans (2019) in this distinguished category. The “Modern Era” category includes athletes who turned pro on or after November 17, 2000 (when the first UFC event under the unified rules of MMA was held), are a minimum age of 35 or who have been retired for one year or more. 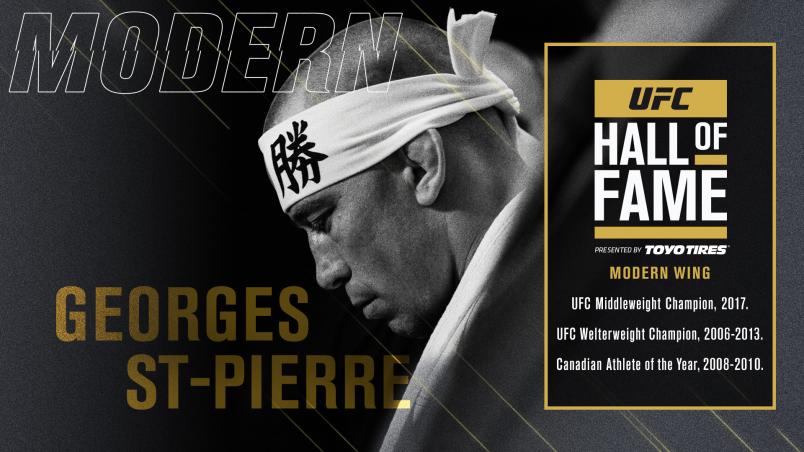 St-Pierre made his UFC debut at UFC® 46: SUPERNATURAL on January 31, 2004 in Las Vegas, defeating Karo Parisyan via unanimous decision. Georges returned to Las Vegas on June 19 to face Jay Hieron at UFC® 48: PAYBACK, defeating Hieron via punches in the first round. The victory earned him his first title shot for the vacant UFC welterweight title against his fighting idol, Matt Hughes, at UFC 50.

UFC® 50: THE WAR OF ‘04 took place on October 22, 2004 in Atlantic City, New Jersey. Hughes, the former five-time UFC welterweight champion and veteran of 41 fights, stepped inside the Octagon® with a goal of regaining the title he lost to Penn at UFC 46. St-Pierre, in awe of the future UFC Hall of Famer, suffered his first loss via armbar submission with seconds remaining in the first round.

St-Pierre returned to the Octagon to face former SuperBrawl welterweight champion Jason Miller at UFC® 52: COUTURE vs. LIDDELL 2. He defeated Miller via unanimous decision to begin a four-fight winning streak in UFC where he defeated Frank Trigg, Sherk and Penn, earning a rematch against Hughes at UFC 65 with the UFC welterweight title on the line.

UFC® 65: BAD INTENTIONS took place on November 18, 2006 in Sacramento, California. St-Pierre controlled the first round with a series of punches and kicks. He connected on a head kick with seconds remaining in the first, as the horn to end the round saved Hughes. Georges continued his dominance in the second round, landing punches for the first minute before connecting on a left head kick 77 seconds into the round, followed by a series of ground strikes to end the fight and become the new UFC welterweight champion.

After a stunning first-round loss to Matt Serra at UFC® 69: SHOOTOUT, St-Pierre returned to the Octagon and defeated Josh Koscheck via unanimous decision in the co-main event of UFC® 74: RESPECT.

Georges would then embark on a six-year, 12-fight winning streak in which he would first capture the interim UFC welterweight title by defeating Hughes via submission at UFC® 79: NEMESIS, then unify the title in a rematch with Serra in Montreal during UFC’s first-ever fight card in Canada, UFC® 83: SERRA vs. ST-PIERRE 2, which he won via TKO.

St-Pierre’s global popularity skyrocketed over the next three years as he secured consecutive victories over Jon Fitch, Penn, Thiago Alves, Dan Hardy and a second win over Koscheck, leading to one of the biggest fights in UFC history at UFC 129.

UFC® 129: ST-PIERRE vs. SHIELDS marked the first-ever sanctioned MMA event in the Province of Ontario. With St-Pierre, now one of the world’s most popular athletes, on an eight-fight winning streak, it was a perfect time for him to headline a card at Toronto’s Rogers Centre, one of the largest venues in the country. His opponent would be Jake Shields, unbeaten in six years with 15 consecutive wins.

St-Pierre would defend the UFC welterweight title three more times, defeating Carlos Condit, Nick Diaz and Johny Hendricks. Following his ninth successful title defense and 12th consecutive victory, Georges took a hiatus from the sport in December 2013. At the time of this break, he held the records for most wins in title bouts with 12.After a four-year hiatus, he returned to face UFC middleweight champion Michael Bisping at UFC® 217: BISPING vs. ST-PIERRE. Bisping entered the matchup on a five-fight winning streak that included wins over UFC® 17: REDEMPTION middleweight tournament champion and former Strikeforce light heavyweight champion Dan Henderson, and former UFC middleweight champions Luke Rockhold and Anderson Silva. 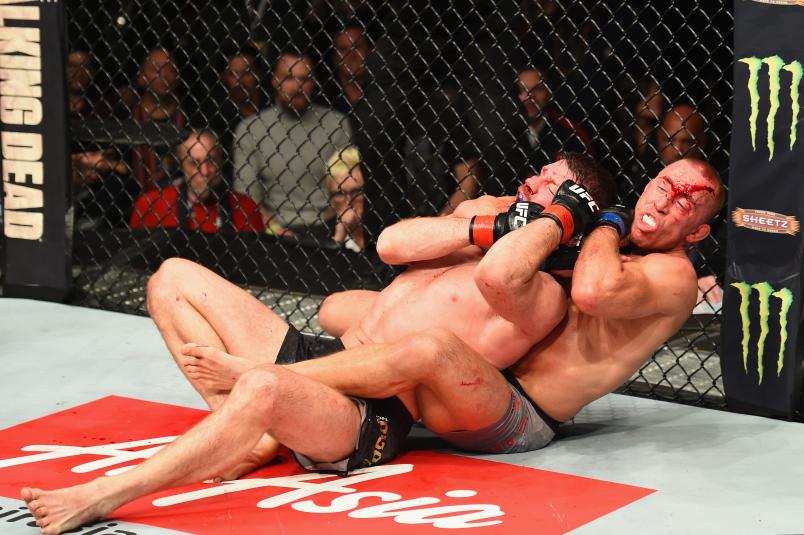 Both fighters would take turns controlling the match during the first two rounds, but St-Pierre outpaced Bisping in strikes, 74-58, submitting Bisping in the third round via rear-naked choke, capturing the UFC middleweight title. He would later vacate the title and retire.

St-Pierre enter the UFC Hall of Fame with an impressive resume that includes:

In January 2019, the UFC welterweight championship belt St-Pierre defended against Penn at UFC® 94: ST-PIERRE vs. PENN 2, was acquired by the Canadian Museum of History, where it remains today for public display.

In 2009, he founded The Georges St-Pierre Foundation to help youth stop bullying and promote physical activity in schools. His foundation which provides grants to student-athletes competing in sports that helped hone his skills, such as boxing, fencing, judo, karate, Olympic wrestling, taekwondo and artistic gymnastics. His foundation supports Kids Help Phone, PREVNet (Promoting Relationships and Eliminating Violence) and Bullying.org.

In 2013, St-Pierre added author to his list of accomplishments when his biography entitled: “The Way of the Fight” was published by William Morrow. Written with Justin Kingsley, “The Way of the Fight” shared lessons on how he overcame bullying and injury to become an internationally celebrated athlete and champion.

A native of St. Isidore, Quebec, Canada, St-Pierre was introduced to Kyokushin Karate at the age of seven, after years of being bullied. Georges dedicated himself to martial arts and advanced to the level of 2nd Dan black belt of Kyokushin Karate by the age of 12. Competing in the All-Canadian Open Junior Kumite Championships as a teenager, he advanced to the finals six consecutive years, capturing five titles. St-Pierre, who also holds a Brazilian Jiu-Jitsu black belt, continues to train at Tristar Gym.

Additional inductees into the UFC Hall of Fame class of 2020 will be announced in the coming weeks.