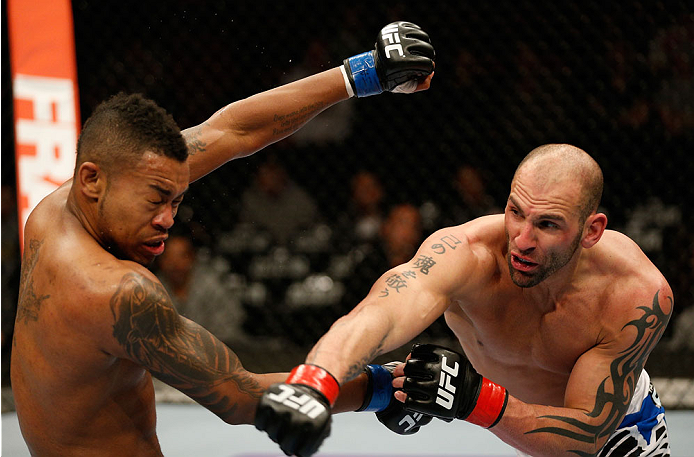 What would you call 200 total strikes and 14 takedown attempts in 15 minutes?

Some may consider it a healthy workout. Others, a unanimous decision win. For Red Bank, New Jersey native George Sullivan, he would call it an off-day.

“I usually throw more strikes than that,” Sullivan reveals. “That was kind of low volume for me. I’m very aggressive. I like to strike. I like to go for knockouts. I never want to go to decision. I hate it. When I got to Chicago, I had a sinus infection bad. When I fought, I had to breathe through my mouth. It was kind of scary. That morning of the fight, I felt horrible. My coaches kept me calm. I had a fever and they got my fever down. I felt as good as I was going to, but when that fight was over, boy did it hit me.”

Obviously, the stat line was Sullivan’s from his Octagon debut victory in January at UFC on FOX: Henderson vs. Thomson. Taking on fellow welterweight debutant Mike Rhodes, “The Silencer” was ever the aggressor pushing the pace for all three rounds toward career win number 15.

Despite the head cold, the W was clearly a momentous occasion for Sullivan, who has been an MMA pro since 2006, and his head coach Kurt Pellegrino, who previously fought 12 times in the UFC. After the scorecards were read, both appeared overcome with emotion, which wasn’t a shock to Sullivan, who vividly remembers how ecstatic he was just getting the opportunity to throw heavy leather inside the Octagon.

“I got the call from Kurt Pellegrino while I was sitting on the couch,” Sullivan remembers. “I thought my fight got cancelled that I had scheduled for a different league. He said, ‘You better sit down for this. You’re going to hear some news.’ I was like, ‘Oh, great. Here we go. The fight is cancelled.’ And then he told me it was the UFC and my face turned bright red and got real hot. I couldn’t stop pacing after he told me. I was blown away. I said ‘yes’ immediately. I didn’t care who the fight was against. The feeling was unreal. It was all these years and I finally got in. I was just like ‘wow’. I couldn’t talk for about three hours. I was just pacing back and forth, so happy.”

The unanimous decision improves the 33-year-old’s current win streak to seven, which dates back to December 2011. There is a major difference between this outcome and his past several, as Sullivan usually silences his foe via strikes. With 10 of his 15 wins by way of KO, he is a dangerous stand-up threat to anyone in the welterweight division and Sullivan is focused on showing that each time he steps inside the Octagon.

“I’m always looking for knockouts,” Sullivan states. “I hit with my whole body and not just my arms. I knee hard. I have knocked out people with 10-ounce boxing gloves on. I just hit hard.  Obviously, it pays to get knockouts in the UFC. You get taken care of. Every guy from here on out, they have something on their face for me. I see a house or a car. That’s my livelihood right there. I need to knock them out.”

Up next, Sullivan will take on The Ultimate Fighter 16 alum Igor Araujo at UFC Fight Night: Bigfoot vs. Arlovski. The Brazil native will certainly have the local Brasilia crowd on his side as Araujo aims to extend his six-fight win streak, which includes back-to-back unanimous decision wins inside the Octagon. The Team Jackson-trained BJJ black belt is a grappling nightmare, owning 17 of his 25 wins via submission. Sullivan’s interest is piqued tangling with an opponent who has a diametrically opposite game plan of where he wants the fight to play out.

“I was very happy for the fight,” affirms Sullivan. ”I’ve always wanted to fight a straight Brazilian jiu-jitsu guy. I have fought three NCAA Division I wrestlers. I have gotten that out of the way. I fought [NCAA Division I All-American] Brandon Becker, I outwrestled him and I knocked him out. Now, I am fighting a jiu-jitsu guy and I would love to do some anti-jiu-jitsu and stop him and then knock him out. I think it is a great fight for me. I like the fact that it is typical ‘striker vs. grappler’. I think grapplers used to have the advantage back then, but I think strikers have the advantage nowadays.”

In preparation for Araujo, Sullivan has double, even tripled, his training on the ground, heading into New York City to roll with arguably the best BJJ player in the world, Marcelo Garcia, and his team of high-profile protégés. On top of that, Sullivan works with Pellegrino MMA’s wrestling coach and two-time New Jersey State Wrestling Coach of the Year Dan O’Cone who takes Sullivan to Rutgers University to train with their NCAA Division I team.

Yet the biggest changes in this camp for “The Silencer” have been rest and focus, as he left his job working at a high-end furniture company that he was with for 13 years to fully pursue his UFC dream.

“This is the first time I’ve trained full-time for a fight,” tells Sullivan. “I would do furniture for nine hours and then train three or four hours a day. I was doing 16-hour days. Thanks to Kurt Pellegrino for changing that for me. He said, ‘Once you get to the UFC, you’ll leave your job.’ That was the deal and I did. I’m excited to go to practice. I’m able to do more. My jiu-jitsu is better. I’m not pushing three hours straight. Now, I’m doing an hour and a half in the morning, an hour midday, and two or three hours at night. I’m gaining time at practice. I added it up. I have 536 hours of sleep and training total by not working. Just for this fight camp. It’s just awesome.”

This Saturday, expect to see a rejuvenated and more aggressive Sullivan aiming to extend his win streak by silencing Araujo with his strikes.