"My goal is to be a champion and fight for the belt and actually have that belt. That’s what motivates me." - George Sotiropoulos 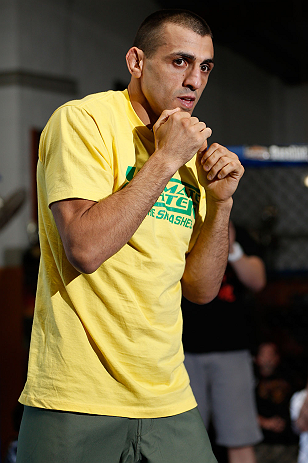 If there’s any silver lining to the more than 17 months George Sotiropoulos has been out of the Octagon, it’s that most people won’t even remember his last fight, a shocking knockout loss to Rafael dos Anjos in July of 2011. But public perception has been the least of the lightweight standout’s worries, as knee surgery, a long rehab process, a change of training scenery to South Florida, and a stint as a coach on The Ultimate Fighter: The Smashes have kept him more than busy in the meantime.

Now he just wants to fight and get back to the business of challenging for the UFC title, a task that begins tonight against the man he coached opposite on The Smashes, Ross Pearson.

“It has been a long time since I fought last, and I think people are very fickle,” said Sotiropoulos. “When I had a seven fight (UFC) win streak, people were talking about me fighting for the title and being a contender. Then I lost two and then all of a sudden people put you at the bottom of the barrel and you’re not in the spotlight like before and they write you off. But I remember coming back after my ACL surgery (in 2008) and I went on a five fight win streak. Going through that process, I became even more focused and hungrier to achieve something, and I feel the same way again going through this. Positives surround it – rededicating yourself, reapplying yourself – and I will achieve the same thing again.”

If anyone is going to right his ship and get back to where he was back in 2010, when he defeated Joe Lauzon in a Fight of the Night battle that marked his seventh consecutive Octagon victory, it’s Sotiropoulos, long considered one of the most mentally and physically prepared fighters in the game. And though a two fight losing streak (against dos Anjos and Dennis Siver) isn’t something to hit the panic button over, Sotiropoulos certainly doesn’t want to make it three.

But since the dos Anjos bout last year, it’s been a struggle just to get into the Octagon. After a brief break following the UFC 132 match, Sotiropoulos was slated to fight Japanese star Takanori Gomi at UFC 144 in February of this year. The always intense Australian hit the gym with even more vigor than usual, but he paid for it.

“I really got carried away in training for the Gomi fight, and I was very extreme in some of the things I was doing with my dieting and my weight cutting, which I think contributed to me getting injured training for that fight,” he said. “My body was pretty badly beat up and I needed to go figure out what was wrong and then I needed surgery.”

Sotiropoulos wound up getting meniscus surgery on both his knees, and though it was a setback, he was determined to make up for lost time.

“I was very dedicated to rehab and getting my condition back and being active and basically doing everything physically that I possibly could,” he said. “And that was the mentality I had.”

Soon after, Sotiropoulos and Pearson were announced as the coaches for The Smashes, and with a hectic travel, promotion, and filming schedule both before and during taping, the 35-year-old’s healing process was slowed.

“Because of the show and the travel schedule that I committed to, it affected the way I healed, and I didn’t know that at the time,” he said. “It took so much effort and I went through a lot of adversity just to get to that point to be able to train.”

He would eventually get back to training, and he is now working with the American Top Team squad in Florida, a positive development for the still hungry contender.

And if Sotiropoulos needed any more of a push to get ready for tonight’s fight, he got it in the form of an unexpected, but heated, rivalry with Pearson.

“Yes, it’s very different. Honestly, I never experienced so much drama in my life. When I was on the show (as a competitor on TUF 6) I didn’t experience that level of drama because I would just walk away from that stuff, go to the room and sleep and just keep to myself. This time, I kept tunnel vision from the minute I walked on the set, but day in day out there was no escaping it.”

He’s not complaining though, at least not when it comes to giving him some extra fight night motivation.

“I think it’s a good thing,” he said. “Competitive drive and competitive spirit are good things to take into a fight.”

What’s even better is just being able to fight. It’s been a long time and a long road, but Sotiropoulos hasn’t wavered a bit in his resolve.

“It’s a lifestyle for me and I’m still committed to my goal,” he said. “I still want to go all the way. My goal is to be a champion and fight for the belt and actually have that belt. That’s what motivates me.”