"My focus was to win every fight, fight by fight. It was never really
just to win and then be in line for the title." - George Sotiropoulos 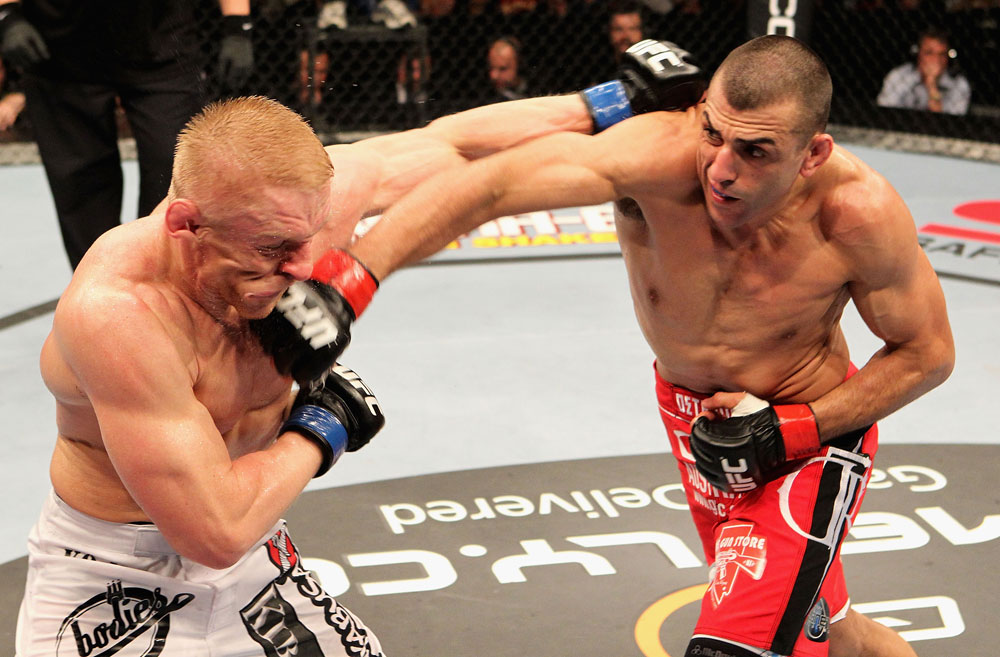 If you get UFC lightweight contender George Sotiropoulos talking about the intricacies of the fight game, you will get a master class of knowledge from one of mixed martial arts’ most dedicated students. But when you reveal that many believed that his decision loss to Dennis Siver at UFC 127 in February, which snapped an eight fight winning streak, was shocking, his answer is brief and to the point.

“I was also shocked,” he said.

What may have been the stunner is that many perceived Siver as a fighter who would be a prime candidate for Sotiropoulos to take down and submit, in the process moving ever closer to a world title shot. But after a slow start, one similar to the one he had in his win over Joe Lauzon last November, Sotiropoulos didn’t make the adjustments he made back at UFC 123, and after 15 minutes, he ran out of time. The decision was unanimous for the Germany’s Siver.

“I guess I did start a little slow in that fight,” said Sotiropoulos, who had not lost since a disqualification at the hands of Japanese star Shinya Aoki in 2006. “I kinda came back into the fight in round two, I pressed a little harder, and I could have won round two, and I think round three could have gone either way. But I think the two knockdowns in round one is what won him the fight. If you took away those knockdowns, the fight could have gone either way or it could have been a draw. I was pretty shocked and I really thought I’d get that guy to the ground and be able to finish the fight there. But it just never happened and I was really focused on that in that fight.”

What followed was plenty of analysis of what went wrong, beginning as soon as Sotiropoulos and his team were back in the hotel the next morning. The way he saw it, a load of traveling between the Lauzon and Siver fights didn’t help matters, but in the end, he had no excuses for the loss when it came to preparation.

“I got into a good groove and had really good training and really hard training, and my sparring went well, my conditioning went great,” he said, “so I can’t really attribute it to one particular thing. I had some other things that I had to deal with, nothing major, just life itself, and there were so many things that I had to accomplish that I was just really, really busy, and I think the combination of factors affected me. But I was well-prepared, my weight cut went really well, and I rehydrated really well.”

What it may have come down to was the training he had briefly done with Siver a while back when the two were in Las Vegas at the same time.

“I trained with Siver back in Vegas and I had no problem wrestling with him or even grappling with him,” he said, but on fight night, he wasn’t able to have the same success with the kickboxer, and while he took him seriously, he took the idea that he would be able to take him to the mat and finish him there even more so.

“I legitimately take everybody seriously,” said the Australia native. “Everyone says that, but I truly mean it. I have an approach that’s very comprehensive, it’s a holistic approach, I’m addressing everything in my training, and I just didn’t make the adjustments in that fight. I didn’t adjust the gameplan to where I try to impose my will standing against Siver, and that was, I think, the mistake that cost me. I was too focused on the takedown in that fight, and he was able to capitalize on that. He knew where the danger was coming from, so he was able to defend it and execute his gameplan, which was striking.”

The loss hurt Sotiropoulos’ immediate title hopes, but in this game, if you let one defeat crush you, you won’t get very far. You’ve got to let it go and move on, and this Saturday night in Las Vegas, Sotiropoulos will do just that in a bout against Brazil’s Rafael dos Anjos. But before he was able to let the Siver fight go, he had to go back to the laboratory and dissect everything.

“I really look at my footage closely, and I studied that fight like I studied all my fights,” he said. “I pretty much broke my whole game down and looked at what I can do to improve the striking, wrestling, grappling, and I made adjustments to training and looked at how I could improve those aspects in my training. And I’ve done that and hopefully everything translates into the fight. There were some things that appeared straightway that were noticeable and we made those adjustments. And obviously when you study the footage and break it down frame by frame, then you start noticing subtleties that you hadn’t picked up before. And those things aren’t really visible to the eye until you break things down frame by frame, which is what I did.”

“It’s very time consuming, and sometimes I could only compare it to pulling out your teeth with pliers,” he laughs after what is likely a huge understatement. “The amount of dedication and commitment that it takes is ridiculous. I don’t place a dollar value on it, but I’d be making a lot of money if I was getting paid for it, let’s put it that way. It’s that obsession to be better, and I guess if you want to get better at something, you’ll do whatever it takes to make things happen. Isn’t that life? Isn’t that what you do as an adult?”

You would hope, but only a select few follow through with it, and Sotiropoulos’ Spartan work ethic and single-minded devotion to the sport have made him perhaps the hardest working fighter in the business. And now the fun really begins for the soon to be 34-year old, because many of his peers might look at the Siver fight as the blueprint for beating him. He’s not concerned.

“I think any loss will be scrutinized and observed by a competitor and opponent because they’re gonna see there’s a chink in the armor,” he said. “I would. But at the same time, I’ve studied opponents in the past and I’ve seen weaknesses in fights opponents won rather than in fights they’ve lost. So it kinda contradicts what we say about the loss. They may do that, but it’s a little simple. To really get an assessment of a fighter, you can’t really look at just one fight; you need to look at the complete picture and look at a series of fights.”

He’s done that with himself and with dos Anjos, and as he approaches this ultra-important bout, don’t expect a brand new George Sotiropoulos on Saturday; simply look for the ol’ reliable version with some new tweaks.

“It’s not really the case that I needed an overhaul in my training,” he said. “It was just a matter of making subtle adjustments to address the problems. You can’t get to this point and need an overhaul. I never would have gotten this far. It’s like when a race car comes in for a pitstop; it doesn’t come in for an overhaul; it just comes in for a little bit of air and water, and to balance the wheels. It’s just minor adjustments.”

So keeping on the automotive theme, it’s time for Sotiropoulos to rev up the engine after a crash and a trip to the body shop and put the car back on the road. As for the road back to where he was before the Siver bout, he’s prepared for that trip, no matter how long it takes.

“I’ve had a lot of time to ponder that issue and that aspect, and look at it from so many different perspectives,” he said. “It took me so long to get to that point, and then that last fight I took a step back and it was a bump in the road. Now I’m not in title contention, but I was, and I think I can be back there with a couple more wins. But that was never really the focus. My focus was to win every fight, fight by fight. It was never really just to win and then be in line for the title. I never really thought that way. For me, it was about the journey that I was on and I still am. I wasn’t really counting how many fights I won. I gave it no thought until I saw articles written about it. I was kind of shocked and I never gave those aspects any consideration because I was just so focused on what I was doing.  It was like I was speeding on the freeway and just looking straight and not looking at what was going on beside me or what I was passing. I took the loss pretty hard, but I said basically that there’s only one remedy to this, and that’s just to get back and do what I was doing. If I won that last fight, what would I be doing? I’d be training. So if I lost, why should that change anything for me?”

Then it was back to work.