George Sotiropoulos and the Art of the Fight

"My focus is executing my strategy and what I’ve been doing in training, and that’s really all that’s important." - George Sotiropoulos 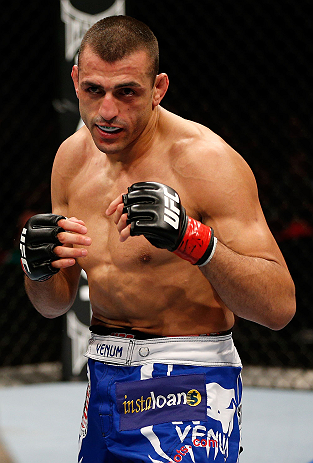 Sometimes, if you don’t listen to the subtle signals your body gives you, that body will speak up for itself. George Sotiropoulos knows this all too well, having been sidelined by various injuries since his December 2012 loss to Ross Pearson.

For the Australia native, it was a ten month period in which one of the most intense and hardest-working fighters in mixed martial arts simply had to dial things back. Not by choice, but by necessity.

“I trained with an old coach of mine and he made it very clear that I was definitely overdoing things,” said the 36-year-old from Victoria. “I had basically grown into a different fighter from a long time ago, and didn’t need to be going at that level anymore. So I’ve made some adjustments and I feel a lot better for it now.”

That’s not to say he’s down to one training session a day, three days a week. No, that just wouldn’t be George Sotiropoulos. But after his move to south Florida to train with American Top Team full-time, he’s found what for him is a happy medium (and for everyone else would still be an insane training schedule).

“I needed a complete camp where I didn’t have to do the road trips, and I needed that level of competition in the gym specifically to the sport that I’m in,” said Sotiropoulos, who has trained in New York, Washington, and various other places before finding his training home in Coconut Creek. “A lot of my training before was spread across different gyms and I had high-caliber training partners, but not to the caliber of guys I’m training with now. Right now there are some notable lightweights in the gym that I’m training with on a daily basis, and I just wasn’t getting that before. So that’s a good thing, but I don’t look at the past as a negative because I don’t really think it made a difference. I think what I was doing was still effective, but it’s comforting to know that you’re training with top lightweights and getting those looks in training.”

And getting them in a single facility, which makes training days more efficient since travel to gym after gym doesn’t have to be factored in, not to mention the reality that a missed session by a coach or training partner could throw the whole schedule into disarray.

The weather’s not bad in Florida either.

“Honestly, I can train in Siberia and it wouldn’t really bother me,” he said, and you believe him. So is it safe to say there have been no hiccups with the move?

“I’ve actually been very productive, and I believe that productivity is gonna show on October 19th,” said Sotiropoulos, who faces KJ Noons on the UFC 166 undercard in Houston. “People will see it. I believe that night I’m gonna shine and I’m gonna do great. I feel great, I’ve had very successful results in my training, the coaches definitely agree, and everybody sees it at the gym.”

If he’s back to winning form on Saturday, Sotiropoulos will snap a three-fight losing streak that has seen him get decisioned by Dennis Siver and knocked out by Rafael dos Anjos and Ross Pearson. It looks bad on paper, but when you consider that those fights were spread out over 22 months, it softens the blow a bit, but not enough to take away the reality that this may very well be a must win for the former lightweight contender. Sotiropoulos doesn’t see the fight that way though.

“A year ago it would have been different, but my mindset is different and I don’t have an attachment to an outcome in the fight,” he said. “Obviously, my focus is executing my strategy and what I’ve been doing in training, and that’s really all that’s important. Focusing on an outcome is not the right way to go into a fight because it’s not what’s important.”

It’s a very martial arts way to look at the sport, and that’s always been Sotiropoulos’ MO. He’s not about the fame, the glory, or any of the other trappings that come along with being a mixed martial arts fighter; it’s still about the art for him.

“The mindset I have now is a lot different,” he said. “I’m a lot calmer, and if you’re focusing on an outcome, you’re not focusing on what your strategy is and what you need to do. The outcome is the result of what you’ve done in training. The outcome itself isn’t important. What’s important is how you’re gonna do it. Yes, it’s a very martial arts mentality, but it’s also a psychological mentality. It’s not just a physical game, it’s a mental game, and at this point, it’s very mental, so that’s why I’m looking at it this way.”