George Roop: On a Mission for Respect 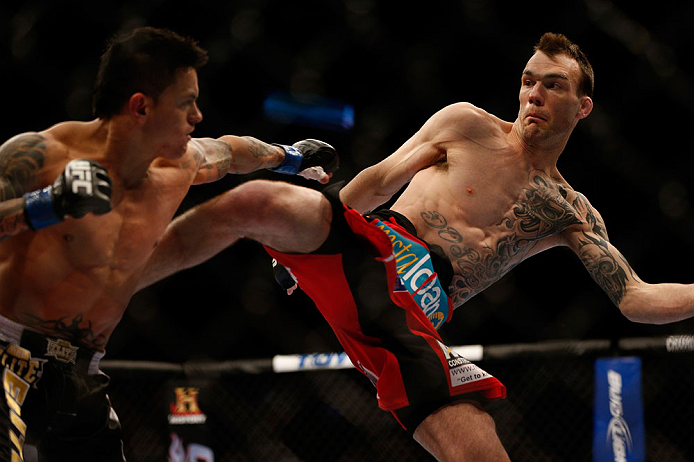 Respect means everything to a fighter. Titles and acclaim are certainly elements to be pursued throughout a career, but earning the respect of peers and the fans who make their jobs possible is the foundation upon which everything is built. For some, that aspect comes easily. But for others, the pursuit of recognition is seemingly a never ending battle, and UFC bantamweight George Roop associates himself with the latter.

The TUF alum has been competing on the sport’s biggest stages for the better part of the past five years and still believes he’s largely overlooked as a mixed martial artist. Despite having competed against – and in some cases defeated – a collection of the best fighters in the featherweight and bantamweight divisions, the Arizona-based fighter feels he’s underestimated by the MMA community and the opponents he faces inside the Octagon. Nevertheless, the APEX MMA product uses the doubt cast upon him as fuel to prepare for the battle ahead because in his mind, the hit you never see coming is the one that does the most damage.

After suffering back-to-back losses to featherweight contenders Cub Swanson and Hatsu Hioki, Roop made the decision to return to bantamweight waters. While it had been over three years since he last competed at 135 pounds, the 31-year-old notched a solid victory over Reuben Duran at UFC 158. The win in Montreal re-energized the Tucson-based fighter and now he’s prepared to establish himself as a legitimate force in the bantamweight division.

“Winning a fight is always a good thing,” Roop said. “I always have the same kind of pressure for every fight though. Every fight I really want to win, and getting back into the win column was good. But nobody puts more pressure on myself than me.

“I think this division is wide open. If you look at all my fights they are against top 10 guys. My last fight was one of the only opponents I’ve had that is not in the top 10 recently. I believe I’ll be able to re-invent myself at 135 pounds and really dominate the competition. I’ll be able to get those wins that I really need.”

The victory over Duran may have been a positive step into the next chapter of his career, but Roop is after so much more. He believes the respect he’s been doggedly chasing is right around the corner and the only thing standing between him and his goal is former WEC bantamweight champion Brian Bowles. Roop is set to square off with the Georgia native this weekend at UFC 160 and to say he’s fired up about the tussle is an understatement.

“These are the kind of fights I like. I love fighting the top 10 guys. I like being the underdog in the fight. This is what makes me train harder. This is what makes me prepare harder. I think stylistically it is kind of similar to my last fight, honestly. Duran was a very tough opponent – just like Bowles will be – and there are a lot of similarities in their styles. I think Bowles has a better jiu-jitsu game than what Duran brought to the table, but they are both good, strong punchers. It is going to feel great to get the recognition that comes with beating a top 10 guy.”

While Roop is re-invigorated and has momentum rolling at 135 pounds, Brian Bowles is looking to jump start his career at UFC 160. The 32-year-old Georgia product was once the number one bantamweight fighter on the planet, but a nasty string of injuries has kept the former champion on the sidelines for nearly two years. When Bowles steps into the Octagon to face Roop in Las Vegas, it will be the first action he’s seen in 18 months.

Any time a fighter experiences a layoff of that caliber, there are going to be questions surrounding his motivation to fight. These matters were amplified recently when Bowles himself told several different media outlets that he fell out of love with the fight game. Roop believes Bowles’ apathy towards fighting isn’t a new issue and feels the WEC veteran has always lacked the heart it takes to be a true fighter.

“I don’t feel like Brian Bowles is a real fighter at heart to be honest,” Roop said. “He’s had some good wins and he has good finishing instincts, but I don’t think he has the love for the sport. He has 12 fights. I have 24 fights and I’m a veteran of this game. I feel like the two really good guys he’s faced he’s lost two. He even quit in between rounds. I went through The Ultimate Fighter house with a broken hand for six and a half weeks and this guy quit in between rounds of a title fight because he broke his hand. A title fight and he quits? I don’t feel like his heart is where it needs to be for competing at this level.

“I was reading that he is refocused now and I’ve never once in my career had to refocus myself. I’m always focused before every single fight. It doesn’t matter if I was fighting at 155, 145, or 135; I’ve always been 100% focused and committed to what I’m doing. I’m always ready to go.”

The fight may technically begin when the referee steps aside and the clock starts ticking, but this isn’t the way Roop sees things. His fight begins every day he steps into the gym and it will continue until he’s earned his place among the best competitors the sport has to offer in the bantamweight division.

Where he’s made other attempts to gain traction in different divisions under the UFC banner, Roop truly believes the 135-pound weight class is where he can make his mark as a mixed martial artist. He feels competing as a bantamweight will not only allow him to gain the respect he’s so fought so hard to achieve, but the decision will also open the doors to his ultimate goal of becoming a UFC champion.

“Every time you see George Roop step inside that Octagon you are going to see a better George Roop,” he said. “I really feel like my Cub Swanson loss was a very good learning experience for me. Also, my Hatsu Hioki loss was a learning experience although I do think I won that fight. Ever since then I’ve reinvented myself as a fighter and really worked on growing the aspects I need to improve upon. This next time coming out I’m going to be better than the last time you saw me.

“I felt like dropping down to bantamweight was a good decision for me. My goal is to be a champion and I feel like I can be the champion at 135 pounds.”