Geoff Neal Always Wants To Put On A Show

After Snapping A Small Losing Skid, Geoff Neal Hopes To Return To His Devastating Form At UFC Fight Night: Santos vs Hill
By Zac Pacleb, on Twitter @ZacPacleb • Aug. 5, 2022

A critical point of an athlete’s development is comprehending what they bring to the table and how to compete within their own selves. There comes a balance with pushing their own boundaries to an extent and making sure they don’t limit their own ceiling, and the ability to find that fine line separates those who fulfill their potential from those who fall short.

That’s all to say: Geoff Neal admits he has to remind himself he is, in fact, a UFC fighter even though he is not just that but also a top-15 welterweight, to boot.

For “Handz of Steel,” part of that reminder is to focus him on the task at hand and the window of opportunity. When he steps into the Octagon, he understands the assignment. 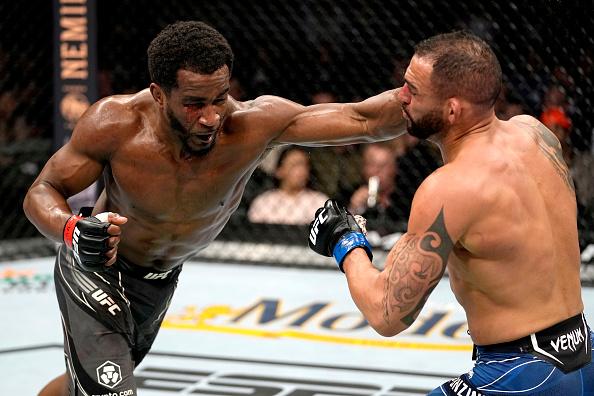 Geoff Neal punches Santiago Ponzinibbio of Argentina during their welterweight bout during the UFC 269 on December 11, 2021 in Las Vegas, Nevada. (Photo by Jeff Bottari/Zuffa LLC)

“I gotta be a crowd pleaser,” Neal told UFC.com. “I don’t talk much. I don’t do all this social media crap. I’m not an influencer. I don’t do s**t like that, but what I do is violence. I do that really well, and that’s how I’m going to get my money.”

That desire to entertain is why he had mixed feelings following his split decision win over Santiago Ponzinibbio at UFC 269. He knew he needed the win coming off back-to-back losses to Stephen Thompson and Neil Magny, but the fight got stagnant in pockets as Neal managed the dangers coming from the Argentinean.

Getting his hand raised is always the first priority, but he left T-Mobile Arena dissatisfied.

“I could’ve done more,” he said. “I feel like I kind of let the fans down with that one. It should’ve been way more exciting than I made it. I made that fight what it was. I just did what I had to do to win. I don’t ever want to fight like that. I always want to put on a show.” 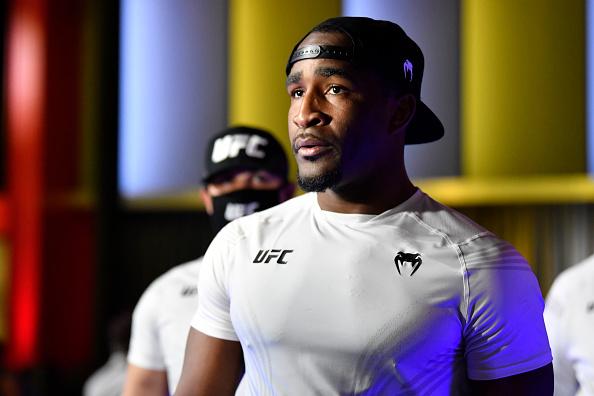 Geoff Neal prepares to fight Neil Magny in a welterweight fight during the UFC Fight Night event at UFC APEX on May 08, 2021 in Las Vegas, Nevada. (Photo by Chris Unger/Zuffa LLC)

A show requires a willing dance partner, which is something Neal won’t have to enter this weekend’s fight night wondering about. Neal gets another top-10 test on August 6 when he faces Vicente Luque at UFC Fight Night: Santos vs Hill in what is as much of a must-watch matchup as there can be at 170 pounds.

Neal was complimentary of Luque and assumed they’d meet somewhere along the line. He even mused that the matchup could’ve been a five-round main event if Neal delivered a better performance last time out and Luque wasn’t coming off a loss to Belal Muhammad.

As far as the stylistic matchup, Neal called Luque “the perfect opponent” to provide fans a fight they’ll remember. Given Luque’s propensity to get into all-out wars, Neal didn’t struggle to find any sort of motivation throughout camp.

“It makes you wake up in the morning and go run eight f***ing miles whenever you get a fighter like that who signs the contract,” Neal said.

More often than not, Neal operates from a technical approach and sticks to the gameplan implemented from Fortis MMA general Sayif Saud. When the finish presents itself, he pounces, but Neal is often a disciplined combatant. 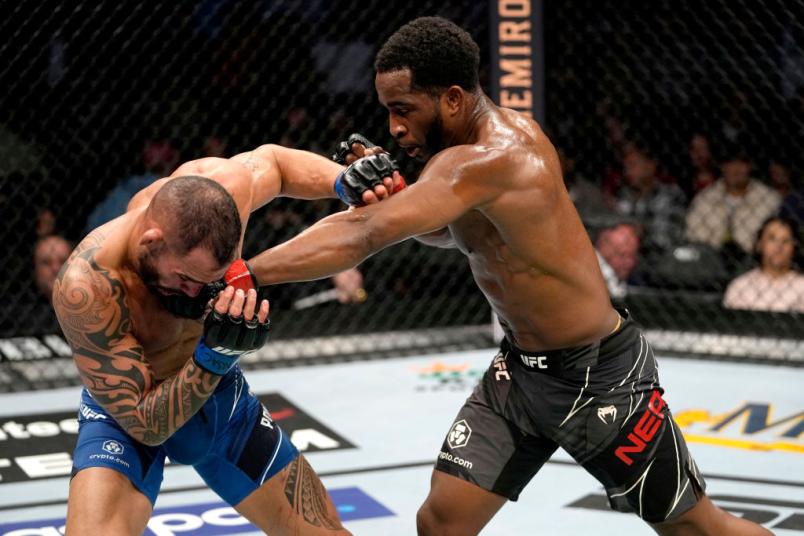 (R-L) Geoff Neal punches Santiago Ponzinibbio of Argentina during their welterweight bout during the UFC 269 on December 11, 2021 in Las Vegas, Nevada. (Photo by Jeff Bottari/Zuffa LLC)

When it comes to fighting a technical brawler of Luque’s ilk, Neal feels like he can lead the dance where he wants, but if his toughness and grit is called into question, the Texas native feels like he has plenty of answers for that kind of situation.

“Most of the time in my fights, I use (aggression) against the person,” Neal said. “If you want to get all grimy and sloppy, then go ahead. I can use that against (Luque), but he’s better than most of the people I fought or almost everybody I fought. I’m probably not going to be able to avoid that. It might have to get nasty. I might have to get grimy.”

Even though Neal fell short in his pair of cracks at the top of the welterweight division, he is hoping the third time is the charm against Luque. It’s the kind of breakthrough fight Neal needs after graduating from Dana White’s Contender Series and winning his first five fights in the Octagon, including a decision victory over Muhammad.

Neal knows who he is as a fighter, and despite needing a reminder or two, he is entirely prepared to make the leap and join the welterweight elite.

“I just got to stay focused, stay on the grind,” Neal said. “I’ve worked 12, 13 years of my life just to get here. I’ve got to stop taking it for granted. I’m a UFC fighter. I need to remember that.”