"I believe I am a top fighter, and if that is true, I should be able to fight anyone and win." - Gegard Mousasi 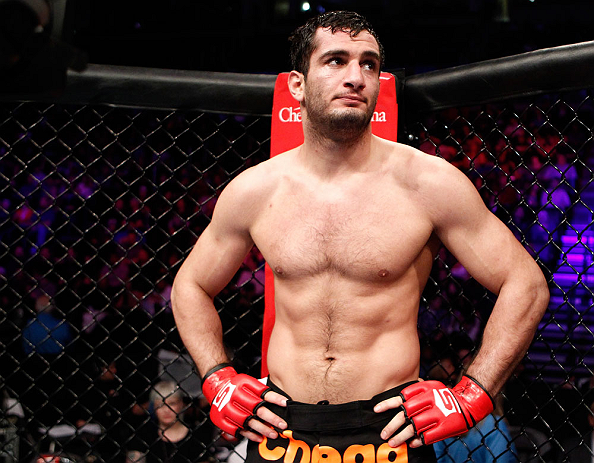 At 27 years old, Gegard Mousasi has competed on some of the biggest stages in combat sports. The Dutch-Armenian fighter has collected championships in multiple organizations and in multiple disciplines around the globe, and with so much success on his resume; it is hard to imagine the biggest challenge of his decade-long career is yet to come. But when he makes his long-awaited UFC debut on Saturday at UFC on FUEL TV 9, he will finally get to test his skills on the most prominent proving ground in all of mixed martial arts.

It is an opportunity Mousasi has been waiting for, but one that will be twisting and turning all the way up until fight night.

The next chapter of Mousasi’s career was originally set to kick off against surging light heavyweight contender Alexander Gustafsson on Saturday in Stockholm, Sweden. It was a highly-anticipated matchup that would have featured two of the most highly-touted 205-pound fighters on the planet, but ultimately a fight which would never come to pass.

Unfortunately, Gustafsson suffered a cut above his left eye in the final week of preparation. When news of “The Mauler’s” injury broke, it set off a chaotic storm of speculation as to whether the Team Alliance fighter would compete, or if the UFC was going to have to find a replacement.

Dana White tweeted out hope to the fans. Wanderlei Silva dropped an ill-timed April Fools’ Day joke. And with his signature unaffected demeanor, Mousasi awaited word as to who he was going to face.

On Tuesday afternoon, Gustafsson’s cut was inspected by the Swedish Mixed Martial Arts Federation and the organization’s doctors refused to give him medical clearance to fight. With Mousasi now without an opponent for the card’s main event, the organization tapped Gustafsson’s training partner Ilir Latifi to step in for the main event on Saturday.

While the obstacle standing in his path may have changed, Mousasi is coming into the fight with everything to prove.

Despite being a former champion in the now-defunct Strikeforce organization, to a large portion of the UFC fan base, the only fights that matter are those that take place inside the Octagon. It is a condition of the fight game he has come to understand, and the circumstances at hand are not enough to tip what has become his signature stoic demeanor.

In Mousasi’s mind, none of the outside factors will affect the fight. It doesn’t matter that he will be competing in front of a passionate Swedish crowd who is there to support his opponent. It doesn’t matter that he is facing a new challenger on four days’ notice. To put it simply: the only thing that matters to Mousasi on fight night is what happens when the cage door closes.

“I have a fight. Other than that, I don’t care much about anything else,” Mousasi said. “I’m going to fight and make sure all the hard work I put in wasn’t for nothing. Having my opponent change doesn’t bother me because I trained for a fight. This is not rocket science. I already had a fight with a different opponent but this is the opponent I have to accept. I didn’t choose my first opponent either. The UFC wants this fight and I will fight. ”

Throughout his career, Mousasi has never shied away from testing himself. The Strikeforce transplant has competed in multiple weight classes as he’s tested his skills in a variety of different professions under the combat sports banner. His experience and success in boxing and kickboxing have made Mousasi one of the most feared strikers in all of mixed martial arts. His understanding of spacing and footwork allow him the unique ability to close the distance on his opposition at will.

While Mousasi’s striking and jiu-jitsu are proven to be dangerous, the one aspect of MMA he’s struggled with in the past is wrestling. In fact, the only fight Mousasi has lost in the last seven years came from his inability to neutralize the wrestling of Muhammed “King Mo” Lawal when the two men competed for the Strikeforce light heavyweight title.

It is a skill set Mousasi has worked diligently to improve, and that progression is going to be tested on Saturday against Latifi. “The Sledgehammer” uses a power-wrestling style and the 29-year-old will be looking to utilize those tools in his UFC debut.

“Latifi is much shorter than Gustafsson and is a wrestler,” Mousasi said. “Alexander was a tall striker and this will be a much different opponent. But I train all aspects of the fight. It’s not like I only trained boxing or kickboxing. It’s going to be a good fight. His wrestling won’t be an issue.

“I always go for the finish and I always come to fight. He is a good opponent and we are going to have an exciting fight.”

Mousasi was originally coming into the main event in Sweden as an underdog, but with the shake up and change of opponent, he now finds himself on the opposite side of the risk factor. Mousasi is on a mission to become the best light heavyweight fighter in the world, and failing to perform against an unknown commodity in Latifi would greatly hinder that progress. Nevertheless, Mousasi believes if he deserves to be labeled as a top fighter, then he should be able to best all comers, and that is what Saturday night is all about.

“There is pressure on me to perform,” Mousasi said. “It’s a high-risk fight. I have a lot to lose and he has nothing to lose. But I believe in my abilities as a fighter and if I can’t perform, it is my own fault. I believe I am a top fighter, and if that is true, I should be able to fight anyone and win.”