Gegard Mousasi: Sticking to the Basics

"It’s going to be difficult, but I need to win two or three good fights and then I can be a contender." - Gegard Mousasi

Gegard Mousasi thought he had seen it all, and it would be hard to disagree with that idea as he approached his February bout with former UFC champion Lyoto Machida. But even as he describes what went wrong in his Fight of the Night decision loss to the unorthodox and crafty Brazilian, he’s eventually at a loss for words.

“I trained for it (Machida’s style) so I knew what to expect, but he was very difficult to hit and fight,” said Mousasi. “He didn’t give you any room to do anything. It was different. It wasn’t really fighting. It was…different.”

He chuckles. “That wasn’t the right approach to fight him.”

The defeat was Mousasi’s first since 2010, but his effort in the fight, the post-fight bonus, and the positive reception from his loyal fan base not just guaranteed that he would return in a high-profile matchup but that he would likely do so in a main event slot.

Which brings us to Saturday in Berlin and a headlining gig against Mark Munoz that will air on UFC FIGHT PASS. Suffice to say that in fighting “The Filipino Wrecking Machine,” Mousasi won’t have to look far to find his foe.

“Munoz comes to fight and you know what he’s going to do and he knows what I’m going to do, so it’s not very difficult to predict,” he said. “It’s who’s going to fight his game, and whoever does that, it’s their night.”

> Check out Mousasi in his Fight Night Berlin pre-fight interview 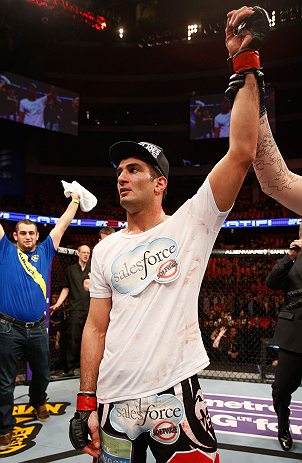 For Mousasi, who was born in Iran but raised in the Netherlands, where he still makes his home today, it’s as cut and dried as that. If he imposes his will, he wins; if Munoz gets the upper hand, it’s his fight. Plain and simple. But before and after those 25 minutes or less on fight night, there’s a lot more going on.

As the European favorite, Mousasi is getting the equivalent of a home game, only the fifth time that’s happened in the last eight years, so that may take a little getting used to for the 28-year-old.

“There are some distractions,” he admits. “You have family and friends coming and stuff like that, but on the other hand, I’m going to feel more comfortable. It’s a short trip to Germany, so I prefer to fight in Europe. It’s nicer for me.”

Does it seem odd to him that there weren’t more opportunities like this for him over the years?

“There weren’t any fights in Europe,” he said of the years when he made his name fighting in Strikeforce and Dream. “I was fighting in Japan or the US, but now the UFC is having shows all around the world, so of course when they have fights in Europe, it makes more sense for me to fight here.”

It’s his second headlining gig as a UFC fighter, having participated in a main event in Sweden in 2013 against Ilir Latifi. That bout was supposed to be against current number one light heavyweight contender Alexander Gustafsson, but a cut forced “The Mauler” out of the fight and thrust the soft-spoken Mousasi into the spotlight basically by himself. At the very least, it prepared him for the same type of media crush leading up to this week’s bout.

“It’s a little bit more work, but it’s not bad – I don’t mind,” he said. “It’s still a fight and it’s not very different to me if I would have been a co-main event or just on the main card. It doesn’t change the fighting.”

There he is again, reducing what some deem as complex into the simplest form possible. That’s a gift, and it’s served Mousasi well throughout his stellar career. Yet despite not tweeting incendiary callouts or talking loud enough to rattle buildings, he is as ambitious and motivated as any fighter, and his motivation at the moment is clear:

“The UFC belt,” he said, “and knowing if I get that, then a lot of things are going to happen. That’s the motivation.”

A win over Munoz won’t get him a shot at the belt, but it will move him further up the 185-pound ladder and set him in good stead for another big fight. He’s fine with that for now, as he’s willing to take the hard road to glory.

“I’m 28,” said Mousasi. “Before 31 I think I will get my shot, if I do well, of course. It’s going to be difficult, but I need to win two or three good fights and then I can be a contender. If I would have won against Machida, I would have been so close, but I have a setback now.”

He doesn’t plan on having any more of those, and if he does eventually get crowned champion, what’s left?