Gegard Mousasi and The Next Big Challenge 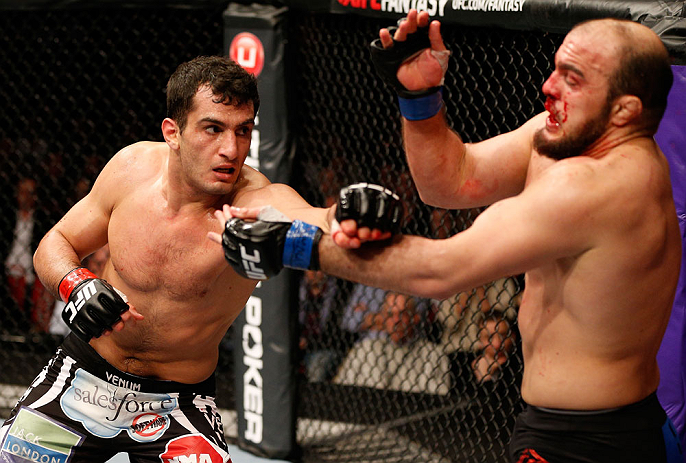 A lot has been made of Ilir Latifi’s decision to step in on just a few days’ notice to face Gegard Mousasi last April, and rightfully so. It was a gutsy move to take on a world-class contender without the benefit of a training camp.

But what of Mousasi and his plight? He was amped up to make his UFC debut against top contender Alexander Gustafsson in a high-profile bout that would immediately put him in the light heavyweight title picture with a win. Instead, he went through days of wondering whether he would fight or not due to the issue of a cut “The Mauler” had suffered in training, and then when Gustafsson was officially pulled from the match, he was tasked with fighting a relative unknown with a completely different style who had nothing to lose and everything to gain in the fight.

That’s plenty to deal with in its own right, but you didn’t hear Mousasi complaining, even though he admits that it wasn’t the ideal situation to be in.

“It was difficult because I didn’t know whether I would fight or not,” he said. “I was preparing for that fight for two months, so not knowing if I was able to fight or not was a huge deal for me, and going from a tall striker to a short wrestler is a big difference. Against Gustafsson I was planning to fight more aggressive and going forward a lot, but against a guy like Latifi I tried to keep the distance and the best thing I could do is keep him at distance with my left.”

Mousasi picked up a clear-cut unanimous decision win over Latifi that night in Stockholm to improve to 34-3-2, but the way he sees it, it wasn’t exactly the introduction he wanted to the UFC fan base.

“I got the win but I didn’t go up in the rankings,” he said. “It didn’t do anything for me. All I got is ‘he couldn’t finish Latifi, who came in on a couple days’ notice.’ So I only got bad reviews. But mentally it wasn’t difficult because I trained for a fight and I was happy that Latifi took the fight and I was able to fight.”

It’s what Mousasi does and has been doing professionally in MMA since 2003, and over the last 10-plus years, few have been better. There were runs in PRIDE and Dream, as well as a Strikeforce stint that saw him win the promotion’s title in 2009 with a knockout of “Babalu” Sobral, and wins over Hector Lombard, Denis Kang, Jacare Souza, and Mark Hunt left no doubt that the Netherlands product was one of the game’s best. But the UFC was THE destination, the place where Mousasi could make his biggest mark, and to not debut with a spectacular performance against a top-level foe left him wanting for more.

More comes this Saturday, as he headlines the UFC Fight Night card in Jaragua do Sul, Brazil against former UFC light heavyweight boss Lyoto Machida. The fight won’t be at 205 though, as Machida is making his second start at 185 pounds, and Mousasi is returning to the middleweight division that he hasn’t graced since 2008.

He’s right. At light heavyweight, champion Jon Jones is already booked to fight Glover Teixeira in April, with Gustafsson and Daniel Cormier expected to be in line right after that should they win their next bouts. In the middleweight division, the winner of the May title fight between champion Chris Weidman and challenger Vitor Belfort will likely be looking at someone who emerges victorious from one of Saturday’s co-featured bouts, whether it’s Machida, Mousasi, Souza, or Francis Carmont. And for the 28-year-old Mousasi, that’s exactly where he wants to be.

“I’m so close,” said Mousasi, who is 6-0-1 in his last seven bouts. “If I beat Machida in a good fashion, Vitor Belfort is already getting his second shot (at the title), then Anderson Silva is injured, so other than me and Jacare, there’s no number one contender, I believe. I feel if I can win impressively against Machida, who’s a well-known fighter and an ex-UFC champion, if that happens and I get a title shot, then that’s what I’m looking for. That’s my goal for 2014.”

But first there is Machida, and the always blunt Mousasi makes it clear that facing the karate-based fighter is no picnic.

“I don’t like to fight a style like his because he’s not a typical fighter,” he said. “I’d rather have a guy who’s easier to prepare for. I’ve trained with Jaouad Ikan, he’s a karate guy and he does exactly the same things that Machida does, but it’s not easy to fight him. On that hand, it’s not a pleasant experience, but it’s a challenge, that’s for sure.”

Gegard Mousasi is no stranger to challenges. His resume proves it. Saturday is just another one.

“I’ve fought strikers, but Machida is a very different type of striker, so I approach it totally different,” he said. “I think he’s a difficult type of fighter to fight, but I will be ready.”