“When I started my MMA career, I fought my first MMA fight and then I was invited by Bas Rutten and Shawn Tompkins to come train in the United States. That was the first time I moved to the United States."
By E. Spencer Kyte, on Twitter @SpencerKyte • Dec. 12, 2019

When Germaine de Randamie squares off with Amanda Nunes on Saturday night at UFC 245 in T-Mobile Arena in Las Vegas, it will mark the first time that “The Iron Lady” has competed in “The Fight Capital of the World,” a fact that seems unlikely given her extensive kickboxing background and having spent more than a decade plying her trade as an MMA fighter.

Despite it being the first time the Dutch title challenger will compete in the Nevada desert, de Randamie sees this weekend’s championship bout as a moment that brings her mixed martial arts career full circle.

“When I started my MMA career, I fought my first MMA fight and then I was invited by Bas Rutten and Shawn Tompkins to come train in the United States,” explained de Randamie, who enters this weekend’s bantamweight title bout on a five-fight winning streak. “That was the first time I moved to the United States.

“I stayed here for three months training with Shawn Tompkins. Unfortunately he’s not here with us anymore, but I know in spirit he will be. It’s just so funny because it’s like the circle is complete now because I’m back where it all started, basically. It all started with a man believing I could do MMA and now the circle is complete because I’m fighting where we met, for the world title, for the biggest MMA title there is. It’s very special to me.”

Everything about this opportunity carries great meaning for the 35-year-old Dutch standout, which is apparent in the excitement in her voice when she discusses all the pieces that tie into this weekend’s championship clash with Nunes.

Just under two years ago, de Randamie was at a major career crossroads.

Fresh off etching her name in the history books as the inaugural UFC women’s featherweight champion — a title Nunes now holds in addition to the bantamweight belt that will be on the line between the two combatants on Saturday — de Randamie returned home to Holland to have surgery on a longstanding hand injury.

Many viewed the decision as a sign of cowardice, that the undefeated, 10-time kickboxing champion was afraid to share the cage with Brazilian wrecking machine Cris Cyborg and was only opting to repair her injured hand as a means of avoiding a bout with the presumptive queen of the division. A few months later, she was stripped of her title.

More than a year would pass before she returned to the Octagon, but when she did, de Randamie picked up right where she left off, scoring a unanimous decision win over recent title challenger Raquel Pennington to jump right back into the thick of the chase in the 135-pound weight class.

“After the hand injury and getting stripped of the belt, I suffered an eye injury and the doctors told me, ‘You’ll never fight again,’ so one thing led to another,” continued de Randamie, who secured her second championship opportunity with a first-round stoppage win over previously unbeaten prospect Aspen Ladd in July. “I’m not a person that talks about those things, but I went from this to this to this.”

Rather than get hung up on the words of social media critics and armchair observers, de Randamie looked inwards, sifting through the noise and pushing forward through the torrent of negativity to arrive at a place of peace and happiness that propels her into the Octagon this weekend.

Where many fighters compete to prove others wrong or chase belts, the thoughtful Dutch combat sports all-star chooses to make the walk to be a positive example to all those who have been told not to pursue their dreams.

That and she loves fighting the way a young child loves opening presents on Christmas morning.

“So many people told me that I couldn’t do it or that I should quit,” began de Randamie, who carries a 9-3 record into her second career meeting with Nunes this weekend. “And there were a couple times where I was like, ‘Why am I still doing this? Why do I keep fighting?’ But I fight because I love it.

“I get to do something I love so much and I get to share my love for fighting with so many people around the world. I honestly believe that it’s important to make time to do whatever you love to do and I want to share that message and that’s what I’ll do Saturday by walking out of that tunnel.

“I’m the writer of my own book and I will do it my way, no matter what,” she added. “I didn’t quit. As soon as I walk out of that tunnel on Saturday, I’ve already won, no matter what happens — if Amanda beats me or I beat her — because I made it, despite what other people said.”

The championship combatants have fought once before, with Nunes earning a first-round stoppage victory when the two were still in the formative stages of their respective MMA careers. 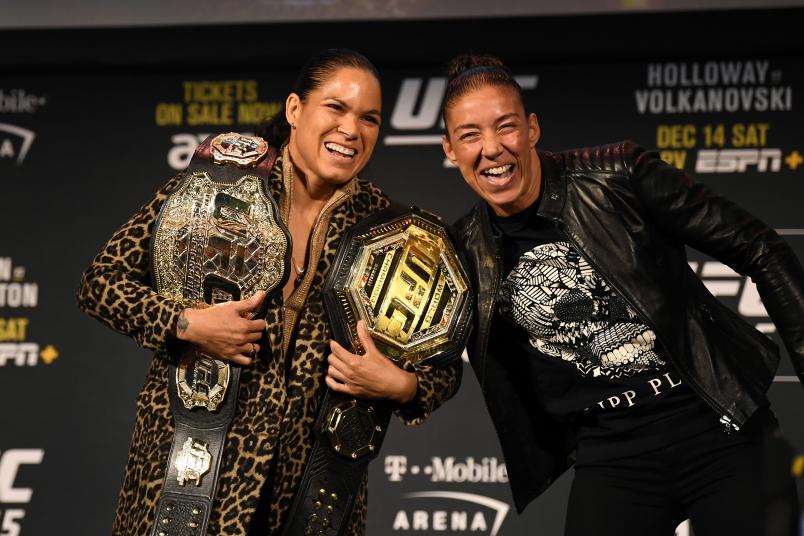 Six years later, they’re set to run it back with the bantamweight title hanging in the balance, however it’s the historical implications of the first of Saturday’s three championship bouts that means the most to de Randamie, not a chance to avenge her previous loss or add another UFC belt to the collection of titles sitting on her mantle at home.

“For me, a win over Amanda means more than the belt,” she said. “I don’t care about the belt. If this were to be a (non-title) SuperFight, I would have been happy because she is the best MMA fighter in the world right now, no doubt, and I have the utmost respect for her. To become the very best, you’ve got to beat the best, so I want to beat the best; the belt is just a trophy.

“This is about the legacy I leave behind and the things I’ve done in my fighting career, nobody can erase that,” continued de Randamie, who went 46-0 as a kickboxer prior to transitioning to mixed martial arts. “I know what I have accomplished. I have written history so many times already and people can overlook that — that’s fine; I’m not doing this to impress anyone or change anyone’s mind.”

And it’s that sharp self-awareness and peace with knowing everything she’s already accomplished in a career spanning more than 20 years that propels her into Saturday night’s bout filled with pride and prepared to walk out of the Octagon with her head held high, regardless of the outcome.

“For 21 years, I’ve been at the top of the food chain in kickboxing and MMA,” said de Randamie, reflecting on her combat sports journey. “I’ve fought the very best of the best and accomplished more than I could ever dream of, so I think winning is absolutely the crown on a beautiful career and there wouldn’t be much left to do after that. And if I lose, it’s the same thing; there’s not much left to do if I lose because I lost to the best MMA fighter on the planet and I gave it my best.

“Whatever happens on Saturday happens, but I will give it my all and I will walk out of that cage with my head up because I’m proud of what I’ve done because I’ve done it my way."