Gastelum Slugs Out Win over Story

DALLAS, March 15 - With the welterweight division taking center stage on Saturday night’s UFC 171 main card, Kelvin Gastelum and Rick Story made sure that the spotlight reached them as well, as the two 170-pounders gave fans a three round war to remember, with Gastelum keeping his unbeaten record intact via split decision at American Airlines Center.

Story took the fight to Gastelum from the start, but the Ultimate Fighter 17 winner found plenty of success with his southpaw jab, quickly opening a cut under Story’s left eye. Gastelum then switched his attacks, rocking Story with kicks and then implementing his ground attack. With 1:35 left the two rose, but now it was Gastelum leading, as Story still looked to be dazed from the earlier shots.

Vancouver’s Story got back in the race in the second stanza, but Gastelum didn’t yield his control of the fight, with his punches and kicks clearly doing more damage. Story got even in a big way in the closing seconds though, with a flush left hook putting Gastelum on his back. The follow up barrage from Story was a furious one, but the bell sounded before “The Horror” could finish.

Gastelum’s 1-2s were on target in the third, and after rocking Story he took his opponent to the mat. Story was able to reverse position and take Gastelum’s back though, adding another twist to this welterweight thriller. Gastelum held Story off and got back to his feet with under a minute left, and again he wobbled Story, who swung back just hard, ending the bout with another compelling burst of action.

Andrade used her strength and grappling to great advantage in the opening round, dominating Pennington against the fence and on the mat. With a minute left, Pennington almost found some daylight as she attempted to snag an armbar, but the Brazilian pilled loose and remained in control until the bell.

Pennington got off some solid punches and knees to kick off round two, but Andrade blasted back with her own strikes before another successful takedown. After the two rose, some even exchanges ensued, but it was Brazil’s Andrade pulling ahead in the final two minutes. Pennington roared back, nearly sinking in a standing guillotine choke, only to answered by a choke attempt by Andrade just before the end of an action-packed round.

The slugfest continued in the final round, Pennington showing off a stiff jab and good knees at close range, while Andrade threw hooks from all angles when able to pun the Coloradan to the fence. With under a minute left, Pennington went for broke, scoring two takedowns and firing away with hammerfists, but Andrade weathered the storm and picked up the hard-earned victory.

Dennis Bermudez made it six in a row in the ultra-competitive featherweight division, halting Jimy Hettes in the third round.

The featherweights got right after it at the opening bell, yet as the first round progressed, it was Bermudez controlling the action with several takedowns and some sharp striking. Bermudez even looked for a late guillotine choke before the bell intervened.

Hettes initially slowed Bermudez’ attack in the second round, but as “The Menace” got Hettes against the fence, he fired off with shots to the head and body, causing “The Kid” to lose his mouthpiece and fall to the canvas. Hettes was able to survive the ensuing onslaught though, even taking Bermudez’ back as the round closed.

A right hand by Bermudez sent Hettes to the canvas a second time in the final round, and while the Pennsylvanian did what he could to try and secure a submission from his back, Bermudez’s mix of defense and offense kept that from happening. After the two stood, Bermudez dropped Hettes again, and this time, referee Kerry Hatley had seen enough, halting the bout at 2:57 of the third.

In a clash of welterweight prospects, Alex Garcia got a gut check in the form of Dallas’ Sean Spencer but emerged victorious by way of a hard-fought three round split decision. 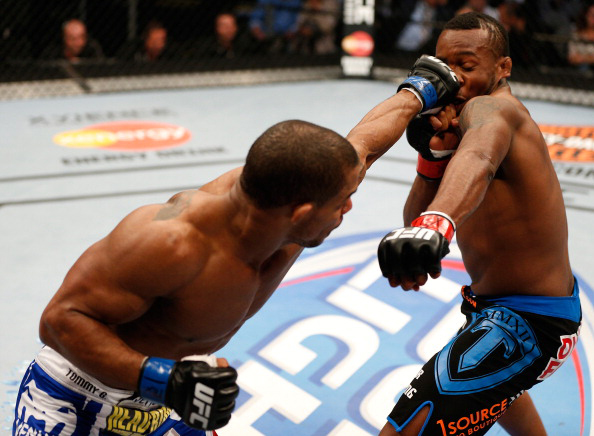 Whether punching, kicking, or grappling, Garcia controlled the action in the first round, with Spencer staying busy throughout, but never able to land anything of note on his foe.

That changed in the second, as Spencer’s aggression allowed him to score with punches and kicks, prompting a takedown by Garcia. When the two rose, the hometown favorite rocked Garcia with a right hand-left kick combination, only to get put in trouble himself courtesy of a Garcia right hand. With the crowd roaring and both fighters shaky, a brawl proceeded to break out, each man loading up and swinging for the cheap seats. With a minute left, Garcia scored with a takedown, but Spencer scrambled out of trouble and scored with big shots after the two stood, sending Garcia back to his corner on wobbly legs.

Garcia got his legs back for round three, but after landing two takedowns, Spencer went on the offensive again, the crowd cheering his every move. And even though Spencer didn’t get the nod, his efforts – along with those of Garcia - deserved each of those cheers.

Forte used his striking attack to set up a takedown in the second minute of the fight, and he effortlessly took Trevino’s back. Trevino hung tough though, eluding serious danger, even though he was then stuck on his back. In the final minute, the fighters rose, and Trevino confidently went after Forte, but wasn’t able to land anything of note.

Trevino got his offense in gear in round two, with his strikes landing repeatedly on the tiring Forte – who entered the bout after missing weight on Friday at 156.5 pounds. The Brazilian did score a late round takedown, but after being unable to do anything with it, it was Trevino getting up to his feet and finishing strong.

The same pattern held true in the final stanza, with Forte able to nab a couple takedowns, but Trevino being the more effective fighter in the stand-up game, which ultimately proved to be the deciding factor in the bout.

Unbeaten flyweight prospect Justin Scoggins was forced the three round distance in his bout against Will Campuzano, but that didn’t dilute the dominant nature of his unanimous decision victory, which upped his unbeaten record to 9-0. 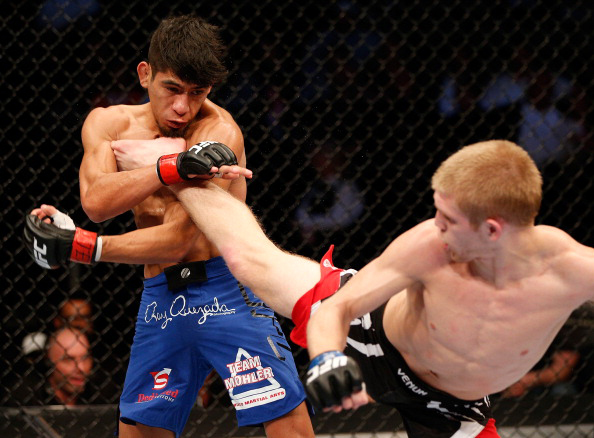 The 21-year-old Scoggins put on a clinic in the opening round, showing off both his striking and grappling games with equal skill, as Campuzano had no answers for either. The Texan was almost able to sink in a guillotine choke on a Scoggins takedown attempt in round two, but other than that brief moment of light, it was all Scoggins again in the second frame.

Campuzano (13-6) landed a hard knee in the opening moments of the third round, putting Scoggins on rubbery legs, but the unbeaten prospect recovered with a quick takedown, and by the time his head cleared, he was back to delivering the punishment on Campuzano. At the end of 15 minutes, there was no question who the winner was, and all three judges concurred, scoring it 30-27.

Strickland, who replaced Tor Troeng, was throwing every punch with fight-ending intentions, but McDaniel’s movement kept many of them from landing. After one exchange, McDaniel sought – and got – the takedown, but Strickland was able to reverse position and get on top, where he fired off strikes at his foe until he was able to take McDaniel’s back. Once there, he sunk his hooks in and the rear naked choke that followed forced McDaniel to tap out at 4:33 of the round.

The first round was fairly uneventful, save for two hard kicks to the midsection by Pineda, and a 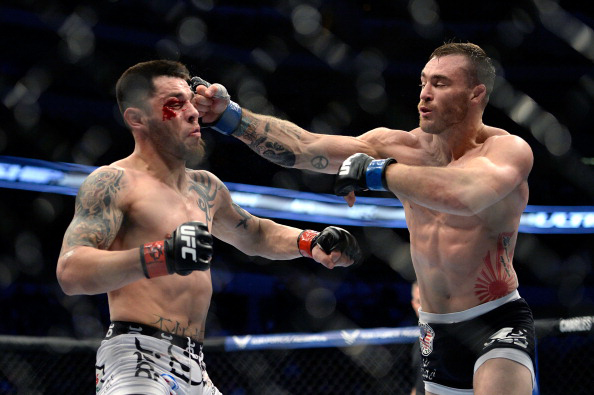 late rally by Whiteford punctuated by a flush punch to the face.

After the two traded takedowns to begin the second, Whiteford got into the kicking game, jarring and cutting Pineda over the right eye with a left to the head. The sight of his own blood appeared to fire the Texan up, as he went on the offensive with his strikes before nearly catching a leg lock late in the round as the fight drifted to the mat.

Whiteford started round three with another takedown, but a stalemate resulted in a restart from referee Don Turnage. A subsequent trip to the canvas saw Pineda almost get the leg lock again, but Whiteford escaped and got back into a dominant position on the mat. After another restart, it was Pineda getting on top, and though he tried for the finish with a kimura attempt, he wasn’t able to get it, with the decision going to Whiteford.