Gastelum on right path to reach the top

When Anderson Silva was removed from his UFC Fight Night bout against Kelvin Gastelum, the former Ultimate Fighter winner went through practically every emotion as he wondered who he would now fight in Saturday’s main event in Shanghai.

And none of those emotions were good.

“That whole day, I was dying of anxiety,” he said. “I felt sick to my stomach and tons of thoughts ran through my mind. I was trying to think the way Dana White, Sean Shelby and Mick Maynard think. Who would make sense to be a late replacement?”

The last name that came to mind was that of Michael Bisping, who just one week earlier had fought Georges St-Pierre in the main event of UFC 217 in New York City. In fact, it didn’t seem to be a realistic possibility at all.

“No, not at all,” he said. “I didn’t expect that. And I was talking to my manager (Ali Abdelaziz), and he told me, ‘What about Bisping?’ I said, ‘No way he’s taking this fight.”

But Bisping did take the fight, and soon, Gastelum got the good news from Abdelaziz. He had a fight in Shanghai against a former middleweight champion. It wasn’t Silva, but Bisping suited him just fine.

“His stock value is still really, really high and this is a tough fight,” said Gastelum of 'The Count'. “He’s coming in pissed, he’s coming in very irritated from losing his title, so I’m sure he’s very highly motivated to get back in there and get a win.”

On paper, it may even end up as a better fight than Silva-Gastelum given the styles of both middleweights, and as much respect as Gastelum has for Bisping, the feeling is mutual, something that’s appreciated by the 26-year-old Arizonan. 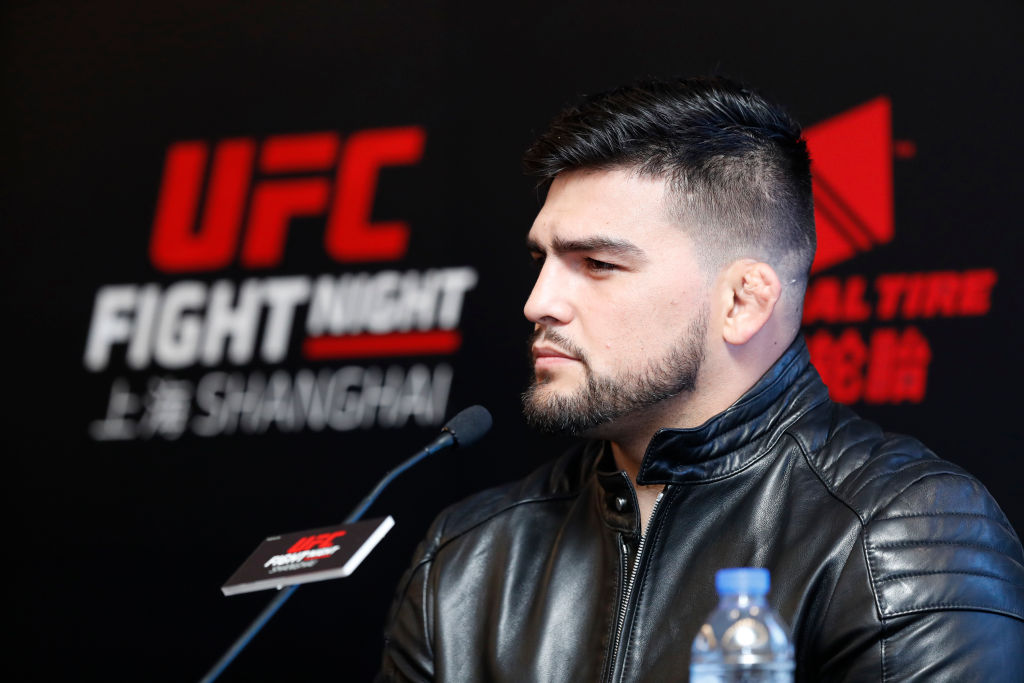 “If I can get a little bit of respect from a guy like Bisping, then that says a lot,” he said. What it says is that after weathering the ups and downs of a career in the fight game, Gastelum is on the right path, and he hasn’t even hit his physical prime yet.

“I am definitely on the right path,” he said. “There’s something to be said about what I’ve done in the past year, like headlining three cards.”

That alone puts Gastelum in rarified air in the UFC, as he is one of the rare fighters to headline three events in a single calendar year without a title being on the line. And while he would like to get his knockout win over Vitor Belfort back after it was ruled a no contest because he tested positive for marijuana, and forget a hard-fought loss to Chris Weidman, a win on Saturday will certainly improve his ranking at 185 pounds and get him closer to a title shot. In fact, after all this, he may just wind up staying at middleweight.

“This might be my permanent home, but who knows?” he said, keeping his options open. “But I feel like 170 is where I’ll end up and where I want to fight for the title. I want to fight Tyron (Woodley) for the title.”
CLICK HERE TO JOIN FIGHT PASS AND WATCH FIGHT NIGHT SHANGHAI FEATURING BISPING VS GASTELUM

It’s an interesting situation for Gastelum to be in. He’s had a lot of success at middleweight, going 3-1, 1 NC there in the UFC, but he has the feeling that there’s unfinished business at welterweight, especially with Woodley, who he lost a split decision to in 2015 after missing weight for the bout. So is it safe to say Mr. Gastelum is the stubborn sort?

It’s a testament to the character of Gastelum that he’s taken responsibility for his weight issues of the past, and yeah, it’s not easy growing up in public on the biggest and brightest stage in MMA. But he’s fought his way through and made it to the other side of his career – the side where every fight is a big fight and every fight can be the one to propel him to the next level. That would scare some folks. Not Kelvin Gastelum.

“This year has been a year of work,” he said. “I haven’t been around saying much, I’ve just been working and fighting. That’s all I’ve been doing the last few years, really. I’m trying to reach the top.”

That’s not to say he isn’t taking in these moments, ones where the kid from Yuma headlined events in Brazil, New York and now Shanghai. Those are things he doesn’t take for granted, even if he’s not screaming them out to the world.

“I’m not very obnoxious, I’m not very talkative, but I’m very thankful for the opportunities the UFC gives me,” he said. “How can I not enjoy this? I’m riding this wave and I’m just enjoying it because it could all be over tomorrow. I’m just blessed.”