Gastelum finally putting it all together before Fortaleza

Kelvin Gastelum was an unrefined lump of coal when he won the middleweight competition on Season 17 of The Ultimate Fighter and I mean that in the most flattering way possible.

At the time, the Yuma, Arizona native was the youngest competitor in the history of the show at 21 years old. He’d fought five times before standing astride Dylan Andrews as the final two contestants to be picked from the cast of 14, getting by on his athleticism and instincts, drawing on his wrestling background and speed to turn back a host of regional level middleweights before making his way into the UFC.

What he lacked in polish, he made up for in determination and will, two intangibles that can’t be taught and often help separate the wheat from the chaff as fighters progress towards the same goal. As he worked his way through the competition with victories over Bubba McDaniel, Colin Hart and Josh Samman to arrive in the finale opposite show-stopping striker Uriah Hall, it was clear to see that the right combination of coaching, experience and focus could reveal Gastelum to be a gem.
RELATED CONTENT: Fight-by-Fight Preview | Vitor Belfort believes his best years are ahead of him | Reasons to Watch Fortaleza

Nearly four years after defeating Hall by split decision to join the roll call of Ultimate Fighter winners, the now 25-year-old middleweight believes he’s starting to put it all together and primed to make good on the early championship projections that initially followed him into the Octagon.

“I was 21 when I won the show and didn’t really know much about anything – how to diet, how to work nutrition, how to 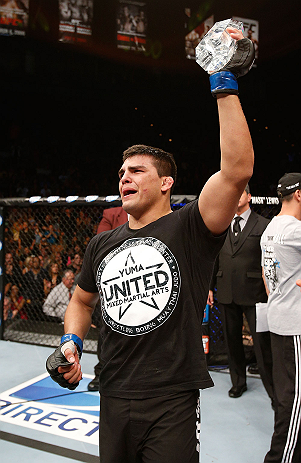 be a professional fighter, how to be a professional athlete,” said Gastelum, speaking from Fortaleza, Brazil, where he’ll take on Vitor Belfort this weekend. “I didn’t know how to do any of it, so I’ve had to learn as I go these few years that I’ve been in the UFC and it’s been hard – it’s been a hard transition and a hard learning experience.

One of the key struggles for Gastelum until recently was finding a permanent place to call home.

He bounced around a lot during his first three years in the UFC, spending a camp or two in various different locales. He’d connect with other members of the TUF 17 cast or sample the experience at an established gym only to be somewhere else the next time training camp rolled around. While getting different looks and training in various settings has its benefits, establishing roots and building a rapport with a set of coaches and teammates is important as well and Gastelum struggled to find the right fit.

Over his last three camps, however, he’s been stationed at Kings MMA in Huntington Beach, training alongside the likes of Fabricio Werdum, Jake Ellenberger and Pedro Munhoz under the watchful eye of Master Rafael Cordeiro.

“I’ve bounced around a little bit, but I’ve found a home now,” said Gastelum, who enters Saturday’s main event with Belfort on a two-fight winning streak. “I’ve found a home at Kings MMA and I feel very, very comfortable in this place and I feel like from now on, this is where I stay.

“I’ve built a great relationship with the guys at Kings – the fighters, the coaches, with Master Cordeiro – and they’ve welcomed me very well and I think that has made a big difference. I’ve bounced around many places, but there is just something different that Cordeiro brings to the table that no other coach does. I’ve found a home here and I’m very happy to be where I am.”

The other struggle Gastelum has faced has been with the scale, as repeated struggles to make the welterweight limit resulted in the promising young fighter being mandated to compete in the middleweight ranks.

At first, he balked at the idea, as he felt the difference between the two divisions was the difference between being a world champion and being “just another guy.” But just as it took time to refine his raw tools and find the right home, his perspective on his future in the 185-pound ranks has shifted over time as well.

“I think it was just me not believing in what I can do and me not having faith in being able to win a world title in either division,” he said when reminded of his previous comments. “I’ve grown and I’ve learned. I’ve been up and I’ve been down in the past year and I have had great experiences, I’ve had really bad experiences and I’m putting it all together finally, creating something that works for me.

“I’ve grown, I’ve learned a lot as a fighter, as a person, and now my perspective on things has changed quite a bit. Now I feel like I can contend in either division now.”

He gets another chance to work toward validating those championship beliefs and projections this weekend, when he steps in opposite the Brazilian legend in Fortaleza.

While Belfort has headlined several shows over the course of his 20-year career, Saturday’s contest is just the second main event of Gastelum’s young career and after the first assignment didn’t fall in his favor, he reluctantly admitted to feeling a little extra pressure this time around. 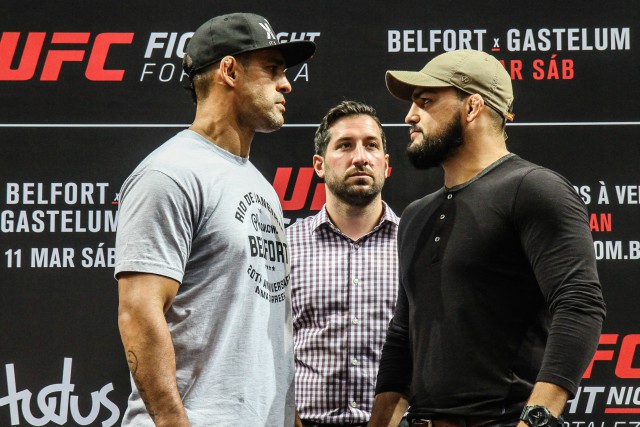 “I don’t want to admit it, but yeah, there is some sense of urgency and a little bit of pressure because the first main event didn’t go my way,” laughed Gastelum, who dropped a split decision to Neil Magny in Monterrey, Mexico the first time he headlined a UFC event. “At the same time, I’m not totally focused on it.

But Gastelum is also aware of what a win over Belfort on Saturday night can do for him and he’s eager to make the most of it and continue showing people that he’s getting closer to being the brilliant diamond in the rough most experts expected him to become four years ago when he first burst on the scene.

“This to me is a new era, a new phase in my career – a phase that will catapult me into the elite. I think a win over Belfort is going to catapult me into being a household name in the UFC.

“That’s where I think my career is going. We’re only going up from here on out.”