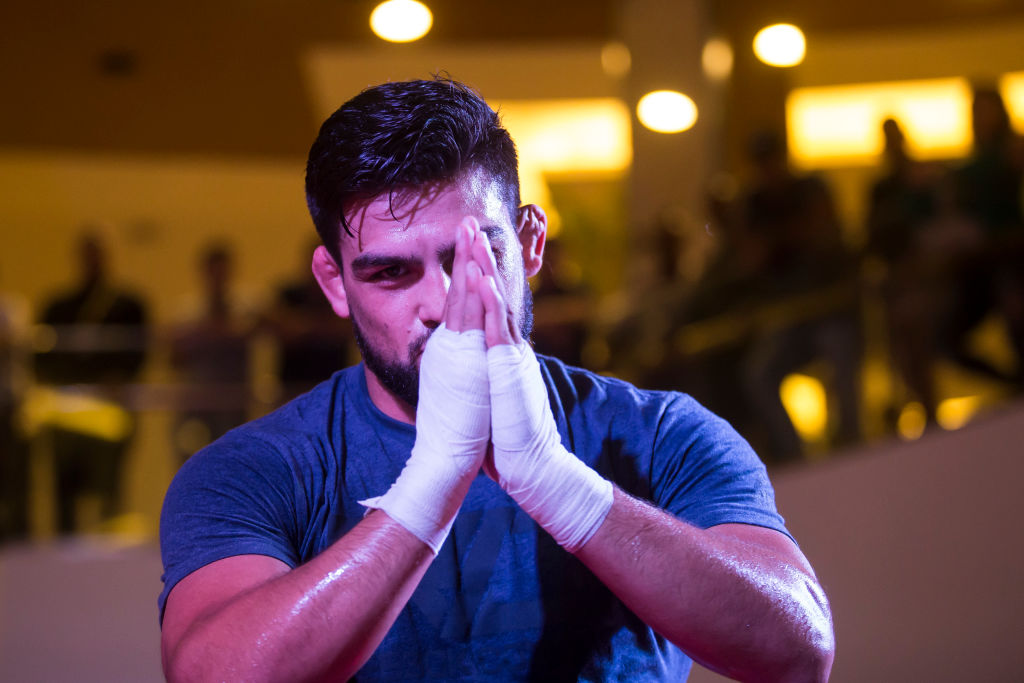 Kelvin Gastelum can smile about it now. It’s a sign that, at 26, he’s matured, not just as a fighter, but as a man. That’s a lot to get to in the space of a few years, but he’s done it, and now, he won’t ever be the youngest champion in UFC history, but he is on track to getting that belt eventually.

“My career hasn’t played out exactly the way I expected it,” he said. “I remember thinking (former UFC light heavyweight champion) Jon Jones won his belt at 23; I’m gonna try and break that record. But obviously I didn’t. I wanted to be the youngest champion, but things haven’t always gone my way. I’ve had some struggles, I’ve had some failures in the sport, but I also believe it’s part of a bigger plan. I feel like all these things happen for a reason, and it’s led me to where I am now.”

At the moment, Gastelum is in Rio de Janeiro, Brazil, the fifth-ranked middleweight in the world about to face the No. 2-ranked Ronaldo “Jacare” Souza in the co-main event of UFC 224 on Saturday. If he wins, he will have a strong case for a bout against the winner of June’s 185-pound title fight between Robert Whittaker and Yoel Romero.

It’s a long way – literally and figuratively - from his days at welterweight, when the battles with the scale were often tougher than the ones in the Octagon.

“My move to middleweight has been a pretty successful one,” he said in a bit of an understatement, considering that he’s 2-1 with 1 NC, the only loss coming against Chris Weidman in July of last year. “I wasn’t really happy with it at the beginning. But I’ve been able to enjoy my life a little bit more. I’m not suffering, I’m not torturing my body as much, and I’m in a lot better mood. It’s horrible when you’re on such a strict diet. You don’t even have a life.”

And after watching him blast out Tim Kennedy, Vitor Belfort (the first round TKO was later changed to a no contest) and Michael Bisping, it’s clear that he’s a lot better fighter 15 pounds north of welterweight, where he still went 6-2 with the only losses being split decisions to current world champ Tyron Woodley and Neil Magny.

“All these fights at middleweight have given me the confidence to know that I can compete with these beasts at middleweight, and I feel like I can be the best middleweight in the world,” said Gastelum, who is now ready to chase gold at 185 pounds, but isn’t ruling out an eventual return to 170.

“I’ve envisioned winning the middleweight title and then going back and challenging Tyron for a rematch,” he said. “That’s been the plan for a long time. I feel I can make it right and I can beat him.”

That’s talk for another day. Today, it’s all about “Jacare,” the Brazilian Jiu-Jitsu wizard who is coming off a head kick knockout of Derek Brunson that rejuvenated his quest for gold. It’s yet another big name that Gastelum will be in with, a pattern that has stayed true ever since he won The Ultimate Fighter in 2013. In the ensuing five years, the Arizona native has faced five UFC champions already, with Jacare’s status as a former Strikeforce titleholder adding to the championship pedigree of Gastelum’s opposition. And that philosophy hasn’t been an accident.

“Every fight that I take has been with the title in mind,” he said. “I’ve always thought, ‘Who’s gonna get me to the title first?’ I’ve always had that in mind and I’ve always wanted to be a champion. So I’ve been picking these hard fights against top-ranked opponents because I know that they’ll get me higher ranked and get me to a title shot.”

A November bout in Shanghai against Anderson Silva would have made a big splash when it comes to Gastelum’s plans, but when Silva was pulled from the bout, Gastelum was left without an opponent.

“I thought my fight was gonna be canceled,” he said. “I was a mess for 24 hours because I had no opponent and a million things were going through my mind.”

Enter Bisping, who was fresh from a fight against Georges St-Pierre just three weeks earlier.

“I got excited; I got another legend to fight,” said Gastelum, who went on to knock the former champion out in less than three minutes.

“It’s crazy to fight these guys that I’ve been watching for a long time, but it’s also something that’s been in my mind for a long time, way before I even fought in the UFC,” he said. “When the time actually comes, it’s like I’ve been there before. I had it in my mind that I was going to destroy whoever it was, and that’s the attitude I’ve got in every fight.”

Next up is Jacare, and Gastelum is going into the bout not with the attitude of a conquering wrecking machine, but as a hungry underdog looking to make a statement.

And then a title shot?

“Absolutely,” Gastelum smiles. “I don’t see any other middleweight who has been doing what I’ve been doing, fighting all these top ten guys, and I don’t see anyone else deserving that title shot after I beat Jacare.”