The Path To A Championship Hasn't Been Easy, But Kelvin Gastelum Is Ready To Make The Most Of His Opportunity.
By Gavin Porter • Apr. 4, 2019

Kelvin Gastelum was already supposed to be the UFC middleweight champion.

And by now he was already supposed to be almost two months into his reign. But less than 24 hours before his UFC 234 title fight, Robert Whittaker was forced to withdraw from the fight and undergo emergency surgery. And just like that, Gastelum’s mission for gold was put back on hold.

“It was at my fingertips,” Gastelum said. “Obviously I was gutted. It was devastating, when all your emotions, thoughts and actions are focused one objective and then it doesn’t happen. After all, I feel like things happen for a reason.”

The hunger inside Gastelum has only grown since that disappointing day in February. In early March the UFC announced that Gastelum wouldn’t have to wait long for his title quest to continue. His opponent - the undefeated Israel Adesanya. The two middleweights will fight for the interim 185-pound belt at UFC 236, with the winner earning a shot at a fully healthy Whittaker.

This match-up is one that Gastelum is not only excited for, but one he’s anticipated for a long time.

“We knew eventually we were going to fight this guy whether it was now or later down the road,” Gastelum said. “We knew that Israel is going to be around for a while and that I will be around for a while. He’s such a skilled fighter but we feel that my style is a problem for him and for anyone. We plan to exploit that.”

UFC 236 takes place on April 13 live from Atlanta, GA, six years to the day since Gastelum secured a spot on the UFC roster by winning the 17th season of The Ultimate Fighter. Gastelum can’t help but draw motivation from the coincidence, giving him all the more confidence that it’s his time.

And based off back-to-back victories over Michael Bisping and Jacare Souza, his self-belief is warranted.

“When you’re young and you think about these moments and you dream about these moments, you expect to feel a certain way,” Gastelum said. “There’s nothing like that. At this point, in my head it’s kind of supposed to be happening. In my head I’ve already been here fighting for world titles, I’ve visualized it many times. So it feels kind of normal but at the same time I’m obviously very excited. This is for the belt. This is for the world championship. This is something that I’ve dreamed about for a long long time.”

That championship mindset will make Gastelum’s walkout to the Octagon set in the center of State Farm Arena a breeze. It will also help prepare him for Adasanya, who defeated Anderson Silva at UFC 234 in a fight that took place just feet away from the on-looking Gastelum.

Gathering information and spending time with Adesanya over the last few months has helped Gastelum gain some perspective into “The Last Stylebender.” 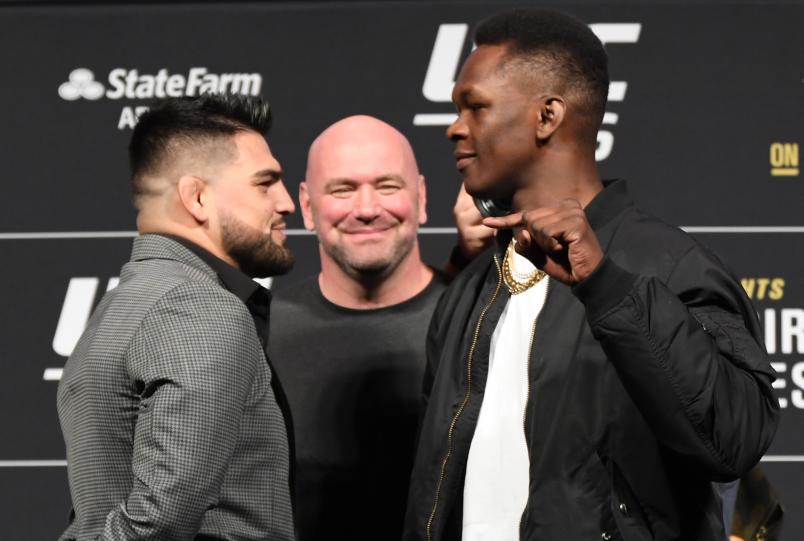 “He’s always been really cool and really respectful,” Gastelum said of Adesanya. “He seems a like a very observant individual, a very smart individual and he’s a student of the game. I respect his skills.”

Adesanya has earned that respect by posting an impressive 16-0 record, which includes five UFC victories in under a calendar year. That momentum is something that Gastelum looks forward to shutting down.

Watch Gastelum take on Adesanya at UFC 236 live on Pay-Per-View at 10pm/7pm ETPT. To order UFC 236, follow this link: https://plus.espn.com/ufc/ppv