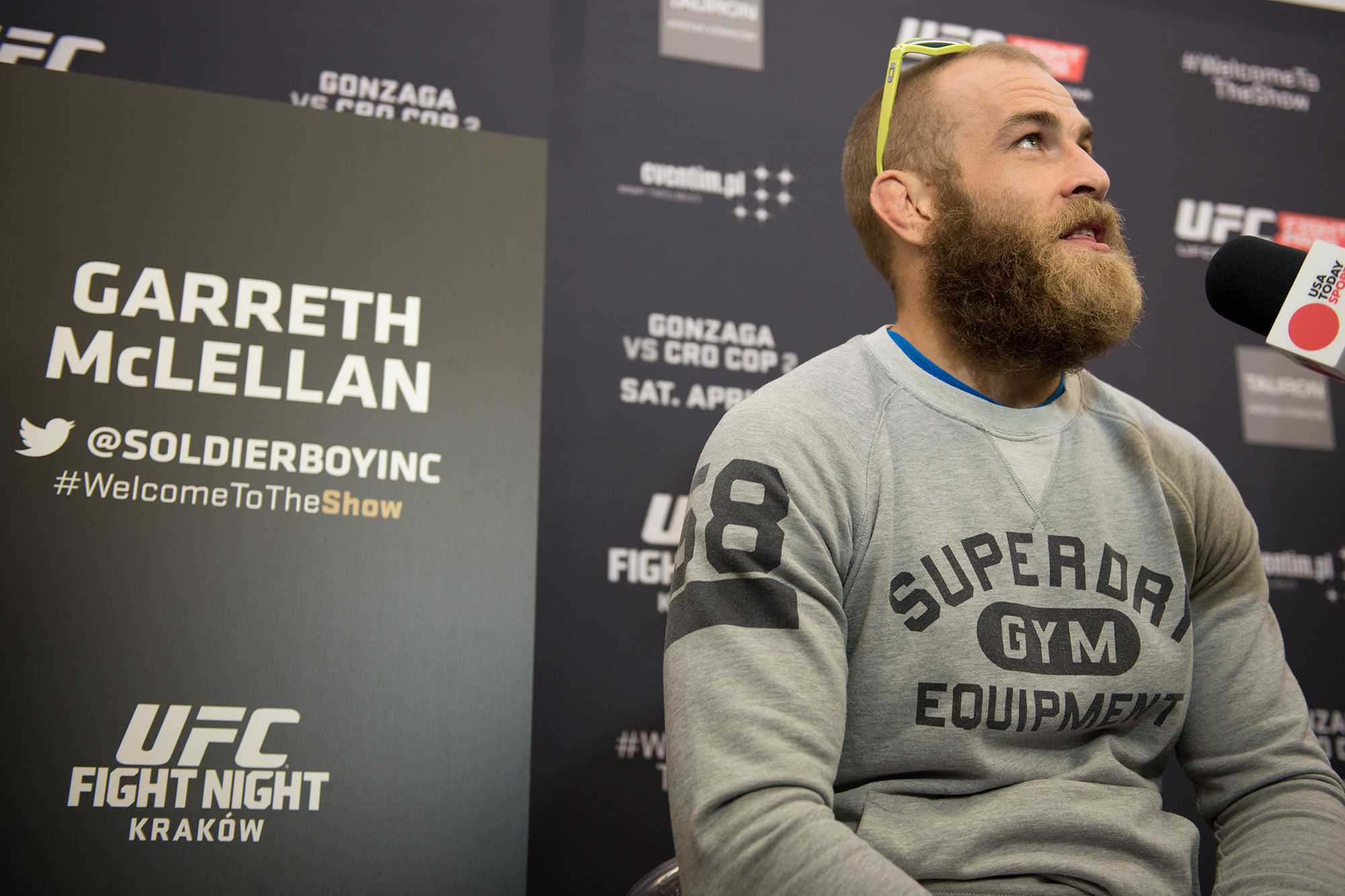 Nicknamed “Soldierboy,” Garreth McLellan may not have served in the military, but there is a stoic, no nonsense air about him. It’s a demeanor that says when he walks into the Octagon for the first time this Saturday to face fellow newcomer Bartosz Fabinski, it’s not an opportunity to smile and take in all the pomp and pageantry in Krakow, but to take care of business. And that business is meant not just prove his worth to UFC fans, but the worth of his nation to compete on the sport’s biggest stage.

“We’ve got some really, really good fighters in this country,” the South Africa native said. “There are guys here that I believe can compete at the UFC level, and not just one of them; I believe there are quite a few guys. I think it’s just a case of us getting the right exposure and putting ourselves out there and showing the world that we are capable of competing.”

An 11-2 pro, Sunninghill’s McLellan is the first South African to compete in the Octagon since Ruan Potts who went 0-3 in 2014-15. Before that it was guys like Neil Grove, Trevor Prangley, and Mark Robinson. Outside of Prangley, no huge impressions were made in the UFC, but McLellan believes it’s just a matter of time.

“If you look at our boxing heritage, we’ve had some amazing world champions,” he said. “We’ve got a fantastic boxing history and martial arts is ripe in our country, it always has been. We just haven’t competed on that top level. And that just takes time. We were a little bit behind in terms of competitive mixed martial arts, but I believe we’ve done very well to close the gap and we will continue to close the gap.”

And now it’s McLellan’s turn, and with six consecutive wins dating back to 2012, he’s on the right track, one he didn’t chase after initially. In his eyes, if he was going to compete in a professional sport, it was going to be rugby. He got close, but ultimately it didn’t pan out for him.

“I’m very passionate about the sport,” he said of rugby. “South Africa is a great rugby nation and they thrive on it, and it was my dream. It was something I wanted to achieve and I wanted to play at the highest level. Unfortunately I didn’t make that level. It’s something I had to accept, but it opened the door into something even more amazing for me.”

That was mixed martial arts. He had studied since he was a child, but while looking to up his fitness for rugby, he found MMA and never looked back.

“I’ve had the most fantastic journey in MMA,” he said. “I’ve been through so many ups and downs, and I’m really starting to see the fruits of my labor. I’m competing on a stage in the biggest event in the world. I’m competing on an international level as an international athlete, so, for me, that’s an amazing achievement. I don’t look back from it and I don’t regret the choices that I made.”

There’s no reason to now, especially having made it to the big show. Yet even though he’s facing a fellow debutant in Fabinski, the whole atmosphere around a UFC event is something he’s never experienced. Luckily, he’s gotten some helpful advice along the way.

“We’ve been fortunate to travel quite a lot and we’ve been around quite a few big names,” McLellan said. “We were at Tristar (in Montreal) for a while and I got to spend some time with some top athletes there, and you kind of get to understand what it’s about and the magnitude of it. But I’ve put it in my mind that it’s a fight and I need to go and fight. I don’t need to worry about what’s happening on the night and the people that are there. As long as I’m doing my job, I’m doing the right thing.”

Now do you see why his teammates gave him his nickname? It’s not about being flashy or loud; it’s about getting the job done.

“I’ve always been somebody that comes to fight,” he said. “I’m not somebody that needs to sock myself up to a point to come and do my job. I know what’s expected of me and I know what I need to put out on the night. I train incredibly hard to achieve those results, and on fight night I’m coming to fight. I’ve got nothing to lose, I’ve got everything to gain, and I’m coming to show the world that I am capable of competing at this level.”