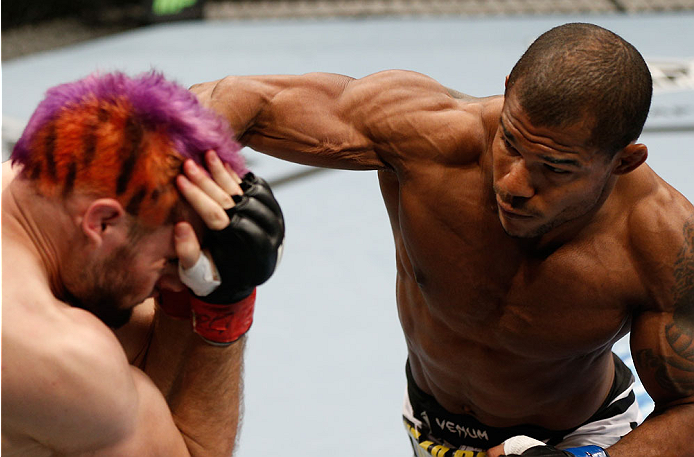 For many poor children in the Dominican Republic, baseball offers a chance at a better life. Alex Garcia grew up playing the game, but his life changed when he found mixed martial arts.

MMA gave Garcia the adrenaline rush he didn’t get from baseball, and he was hooked from his first fight.  Now, he’s a UFC welterweight. This Saturday, he fights Mike “Quick” Swick at UFC 189 at the MGM Grand Garden Arena in Las Vegas. But Garcia could generate serious power with a bat.  For proof of that, watch his December 2013 Octagon debut, and the vicious punches he threw to KO Ben Wall in 43 seconds.

“I probably had the talent (to be a professional baseball player), but it wasn’t my thing; I didn’t like it that much. What I love to do is what I do now, that’s why I made the switch and I think any decision (I make) in life I’m always happy with the situation. Baseball was good at the time but it wasn’t the sport for me. And mixed martial arts was what I wanted to do, and I switched.”

While Garcia’s hometown of Cabarete is a beachside tourist destination, his early life wasn’t easy.  With his mother raising Garcia and his two sisters alone, money was scarce. Garcia would walk an hour each way to school as a child. At age 12, he needed a part-time job to help support his family.

While Garcia now lives in Montreal and fights for the famed Tristar Gym, he shares a common motivator with the scores of Dominican baseball players looking to make the Major Leagues. He wants to make life easier for his family back home.

“(Helping my family) It’s one of the motivations for me every day, to try and get better and grinding myself to become a better athlete because I definitely want to help my family in every different way I can help them. I come from a very tough family; we help each other all the time, and I was raised that way, so I’m looking forward to making things happen for my family and also for my own family in the future.”

Although the 27-year-old Garcia’s focus is his own fighting career, he may have a role in converting the next “Dominican Nightmare” from baseball to MMA.

“Me and my friends share (a MMA) school; we have kids (who train there). I always go back there and help as much as I can, in the very poor area of Cabarete,” Garcia said. “It’s not to benefit us; it’s for the community. We have all the kids around and they can come and train whenever they want and they don’t have to pay.”

It’s been ten months since Garcia’s last fight in the UFC’s Octagon, a close decision loss to Neil Magny. “The Dominican Nightmare” believes he deserved a win.

“It feels bad to lose a very close decision. I feel like the judges gave it to him. It feels bad but at the same time I’m not going to let this hold my career back. I have to try and keep doing better every time I compete.”

Garcia tore his ACL and meniscus early in the fight. While he pushed through the injury, it undoubtedly affected his performance. It’s also the reason he hasn’t fought since August 23, 2014, as he’s undergone two knee surgeries and rehabilitation.

It’s been tough, but he’s had help keeping positive from a fighter who knows the knee injury journey all too well, teammate and former UFC welterweight champion Georges St-Pierre.

“He’s been there twice; he definitely helped me out mentally with the situation.  He gave me some advice during my rehab situation, he helped me in a lot of different ways, to keep my head high and be able to keep doing what I love to do.”

Swick is perhaps the most difficult test of Garcia’s career. A UFC veteran, he has the experience advantage, and with wins by KO and submission, he is dangerous everywhere.

And though Tristar is a smart team known for studying opponents, Swick (15-5 in MMA) hasn’t fought in over two years, which adds an element of the unknown.

“My coaches look (at video of Swick) more than me, but I also look because I like to study my opponents in general, and we come up with a formula together, and we break it down together, how we can beat him,” Garcia said.  “But the thing is, there’s only so much we can do, because he was out for a while, so he’s going to come back a different athlete. So we do a little homework and the rest you just react in the moment.”

The heavy-handed Garcia, who also has a split decision victory over Sean Spencer in the UFC, is looking to score a knockout.

A win over 36-year-old Swick will bring Garcia a step closer to one his ambitions. It’s a lofty goal considering the status of baseball in Garcia’s Caribbean homeland, but one that seems possible with the UFC now bigger than ever before.

“I’m definitely looking to be the most famous athlete from the Dominican Republic.”