Garbrandt's Only Opponent Is Himself

Heading Into UFC 235, Cody Garbrandt Is Focused On Conquering His Personal Demons
By Gavin Porter • Feb. 28, 2019

In the lead up to UFC bantamweight Cody Garbrandt’s last two fights, the headlines were centered on his rivalry with champion TJ Dillashaw. And while neither of those match-ups went his way, Garbrandt is focused on turning the corner.

“No Love” has spent the time since his title rematch with Dillashaw at UFC 227 in August recapturing the magic that helped propel him to a title run in 2017.

“I was able to work on things, heal injuries, get better at movements and mobility. Just little things like that,” Garbrandt said. “Honestly just going back to the most basic thing, that I love fighting. I don’t need to be filled with hatred or animosity or anything. I just need to go in there and fight and do my style.”

Refocusing on himself and winning the mental battle is something that Garbrandt feels like he has accomplished and now he’s ready to show the world that he’s back. At UFC 235 on March 2nd, Garbrandt will take on Pedro Munhoz, who is coming off a TKO victory over Brian Carraway. A win over “The Young Punisher” would do a lot to justify Garbrandt’s efforts and get him back on track toward the top of the division.

We caught up with Garbrandt to discuss his match-up with Munhoz, how he is feeling, what’s new and how he can win at UFC 235.

UFC: You’ve been able to take a nice break since UFC 227. How has it been to take a step back, get rested and take some time with your family?

CG: It’s been nice to kind of just pull back from the media and really find that balance. I’m a father, my son is 10 months old so to be able to watch him grow and be there for him in these times. I believe that everything happens for a reason so I was able to refocus, heal up some injuries. You know I’m always training so I was able to refocus my energy on what my purpose was and it’s fighting. No matter what this is what I am supposed to do. Most importantly I was able to find that balance of being a father, being a husband, being a fighter and just finding that balance I wasn’t able to inside of camps.

UFC: Has being a father changed you as a fighter?

CG: It’s definitely added to me as a fighter but also a human, as a man. The greatest title that I could ever hold is being a father, being there for my son through everything. I see him and I know that it’s on me to give him a good life.

UFC: What are some things you have done since your last fight to improve as a fighter?

CG: Just getting back to not the bulls*** of it all, you know what I mean. The primal instincts of fighting, going out there and challenging yourself. It’s not me vs any of my adversaries, it’s always me vs me so really battling my demons inside that I battle every day when I wake up. I gotta win the day, win the day every day, every morning you know what I mean?  You have those demons of doubts, I’ll sleep in or I’ll do this, you gotta push yourself. Just being real with myself and making no excuses and getting back to the hard work. Hard work pays off and put myself into uncomfortable situations.

It’s a fight you know, we are fighting the best guys in the world and it’s going to be uncomfortable at times. You have to be able bite down and bear through it and find an outcome. And just putting myself in those positions in training to where it’s like callousing my mind to go to battle in the Octagon where it really counts. When it’s a close fight, tough fight and I need to go above to bury my adversary. So just putting myself there and being able to have the time to train to where I wasn’t just jumping into fight camps. 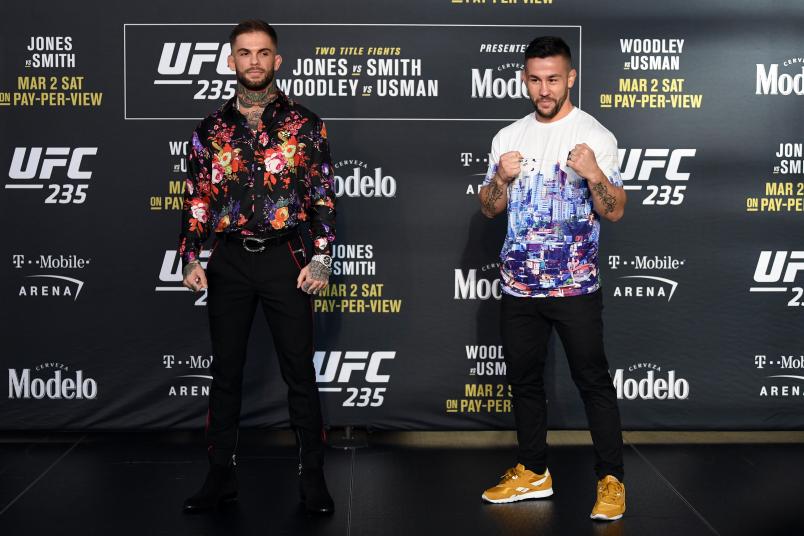 UFC: What are your thoughts on opponent Pedro Munhoz?

CG:  I always respect all my opponents. I think he’s a tough guy, he went out there and competed and done some great finishes in his last fights. But this not anything against him, it’s me vs me. When I’m defeating my demons, the battles that go on in my head and my mind. Already going into this fight I feel like it’s just go out there show up, show up and have fun get in that flow state. Like I said take nothing from him he’s a tough dude he’s going to come to fight I’m just on the next level.

UFC: It’s been a while since your fans have seen you fight. What can they expect from you on March 2nd?

CG: I’m very excited, it’s been a while since I’ve been this excited for a fight as far as health wise and the mental aspect of it. I’m finally at a point in my life where it’s fun for me again. The hunger and the drive was always gonna be there but I’m excited like chompin’ at the bit to get back inside the Octagon and put on some amazing performances. I’m 27 years old I still have the best performances of my life ahead of me and that’s done by putting your nose to the ground and putting in the hard work. Then reaping the benefits of the hard work on fight night.