Garbrandt's book 'The Pact' shows true example of a fighter 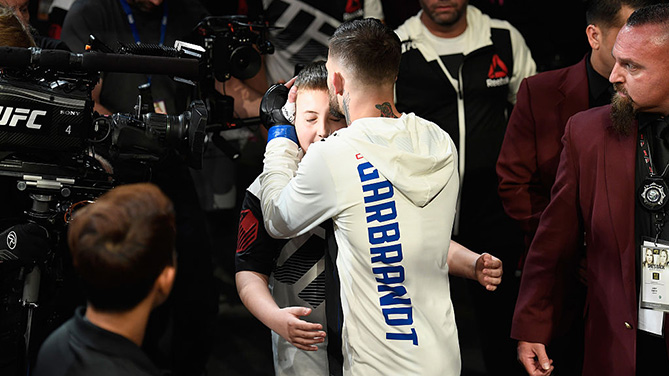 Every single decision in life can change the entire outcome of the story.

Former UFC champion Cody Garbrandt’s road to gold inside the Octagon was paved by the courage and the will to live inside the heart of a five-year-old boy named Maddux Maple.

The man known ironically in the fight world as “No Love” tells the heartwarming tale of his bond with Maddux in his new book “The Pact,” which hits bookshelves today. The story chronicles Garbrandt’s tumultuous youth caught in the trenches of a hard-nosed, blue collar town where fighting is almost like a prison sentence. Youngsters that grow up in Uhrichsville, Ohio have a penchant for trading punches, but it wasn’t until Garbrandt met Maddux that he truly understood what a real fighter looked like.

“Looking back on it, it’s a miracle we were able to save each other’s life because I was in no position to be a role model or be anything like that to this kid. But once I met him it redirected my faith, my focus and gave me more purpose in life.” - Cody Garbrandt

Readers are introduced to Maddux a few chapters into the book when Garbrandt details a conversation he has with his older brother Zach Garbrandt, who saw a Facebook post about a young boy in their neighborhood that needed help. He was in the early stages of a battle with acute lymphocyctic leukemia, and Garbrandt felt an immediate connection to the young boy’s story.

After months of text messages and emails, Garbrandt met Maddux. The pair’s shared unending supply of determination made it like they were both looking into a mirror when they saw the other fight – Maddux in his hospital bed and Garbrandt inside the cage. As Garbrandt eyed a run at the UFC and Maddux longed for the day he was cancer-free, the two forged a pact that kept them going during the toughest times in the years to come.

The pact was simple: If Maddux could beat cancer then Garbrandt would take the young boy along for the ride of a lifetime to the UFC.

To Maddux, Garbrandt was a superhero with unmatched powers on fight night. So on Maddux’s toughest day in the fight of his life, Mic and Stephani Maple turned to Garbrandt to help keep their son in the fight when he couldn’t stand to take another pill with seven months left of chemotherapy.

“We tell Cody all the time that we owe him our lives because Maddux was struggling,” Stephani Maple said. “He told us that day he was done and he just wanted to die. God sent Cody into Maddux’s life and it’s absolutely amazing to know that Maddux has someone like that to look up to to help him get through that treatment. I don’t know that anyone else could have done that (for Maddux).”

A story of two champions and a promise kept.

The book goes on to follow Garbrandt through the fights that led to his eventual championship epic against Dominic Cruz at UFC 207 in Las Vegas. Maddux’s starring role at the side of his hero helps “No Love” accomplish his ultimate goal: winning the UFC championship.

“Looking back on it, it’s a miracle we were able to save each other’s life because I was in no position to be a role model or be anything like that to this kid,” Garbrandt said. “But once I met him it redirected my faith, my focus and gave me more purpose in life. He came into my life and re-lit that fire and that passion that I wanted to be a fighter.”

For fight fans, the book follows Garbrandt’s career journey to becoming a professional mixed martial artist. The trek takes him from Ohio to Pittsburgh before he finds his home at Team Alpha Male in California with Urijah Faber and company.

RELATED: WATCH AS UFC INSIDER GOES ON THE ROAD TO OHIO TO SEE CODY AND MADDUX UP CLOSE

Every fight took Garbrandt one step closer to the UFC. Faber promised the young prospect a shot in the big show once he put together a pro record of 5-0. That’s when the pressure started to mount – for the Maples at least.

“Me and Steph, behind the scenes we were like, ‘If he loses this it’s going to set him back years.’ We felt like we were his parents because we knew he was so close and we wanted it for him so bad,” Mic Maple said about some of the high profile bouts for Garbrandt in the UFC.

Garbrandt always wanted Maple in his corner and by his side on the walk to his fights. Maddux’s parents were always concerned about the pressure, but looking back they’ve realized that Garbrandt needed Maddux just as much as Maddux needed Garbrandt.

“Maddux is doing good now and people gonna look at him and he’s great and it’s all good,” Mic Maple said. “But Cody’s seen him on his death bed, basically. When you see somebody that you’ve become real close to, somebody basically like a brother and that close to death –The motivation to keep battling for this kid that he’s absolutely took to at such a young age (was amazing).”

“You have to fight for what you want in your life...sometimes you have to fight to survive.” . My book comes out in 8 days now, and I’m really stoked for you guys to read my story If you haven’t pre-ordered it yet, you definitely should Live to fight. Fight to live. #ThePact
A post shared by Cody Garbrandt (@cody_nolove) on Apr 30, 2018 at 11:32am PDT

One of author Mark Dagostino’s major takeaways from the book project with Garbrandt was the fighter’s relentless drive. He was surprised to learn that Garbrandt’s fighting spirit may actually be surpassed by his unyielding compassion.

“The fact that he was open and willing to show some love for this kid – to open up his heart to this kid and family – that opened him up to a whole other side of life,” Dagostino said. “It sent him on a different path than just being the fighter or just being the cocky kid or talented fighter that he is. I don’t think you have to be a UFC fan to get this story and to understand it. I think there’s something awesome here that we can all be inspired by.”