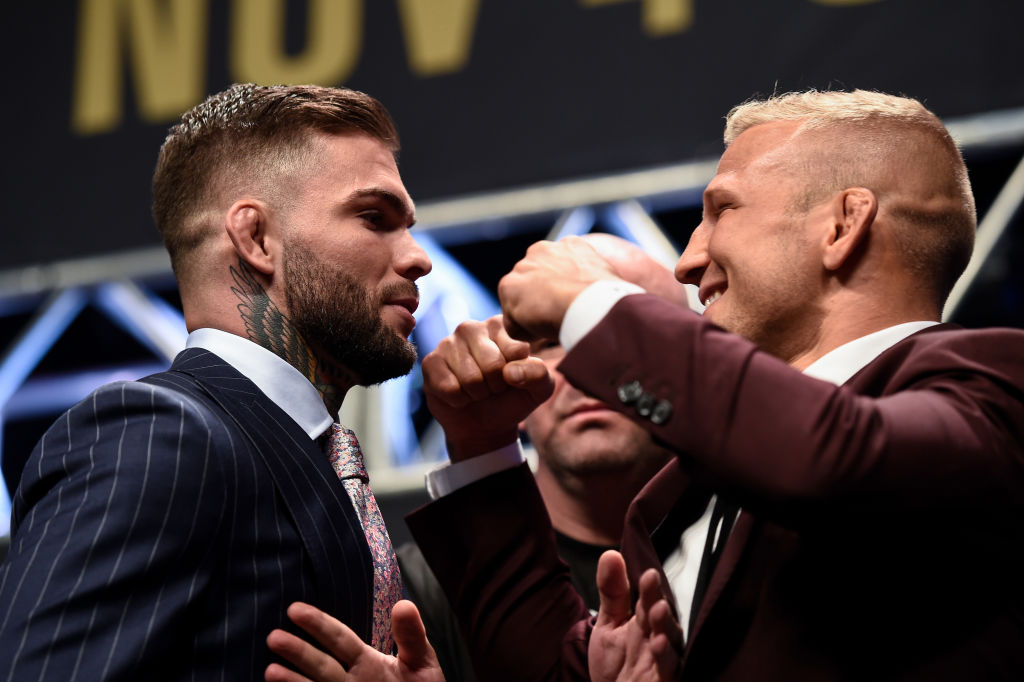 Cody Garbrandt and TJ Dillashaw face off during the UFC 217 news conference inside T-Mobile Arena on October 6, 2017 in Las Vegas, Nevada. (Photo by Brandon Magnus/Zuffa LLC)" align="center" />In the world of mixed martial arts, there aren’t too many teams as close as the Team Alpha Male squad in Sacramento. See one of their fighters somewhere, and three more are likely in the vicinity. It’s a collective that trains together, eats together, and hangs out together, so when someone leaves that group, it’s a big deal.

That brings us to Nov. 4 in Madison Square Garden, the site where current TAM member Cody Garbrandt defends his UFC bantamweight title against former teammate TJ Dillashaw in the UFC 217 co-main event. In a fight game filled with bad blood rivalries, this might be the most heated at the moment, one that has been simmering ever since Dillashaw left California for Colorado in October 2015.

At the time, it appeared to be an amicable split, with Dillashaw simply opting to continue his work with former TAM head coach Duane Ludwig. 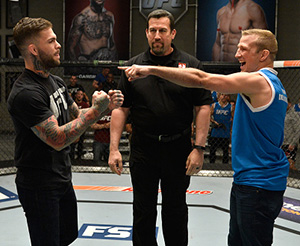 The Ultimate Fighter: Redemption at the UFC TUF Gym on March1, 2017 in Las Vegas, Nevada. (Photo by Brandon Magnus/Zuffa LLC)" align="left" />“I told them (Team Alpha Male), ‘Look, it’s a real tough situation for me, and I don’t want to leave my team and I want to figure some things out,’” he told me when his departure became public. “So I’ve been talking about it, but I just finally made the decision yesterday, so it’s kind of crazy how fast news is spreading. But things are good, I’ve got a lot of support from the guys and they know my situation. There’s no hard feelings whatsoever and I plan on continuing to be part of the family even though I’ll be doing my camp out in Colorado. All those guys are dear to my heart, and I’m going to continue to spend time with them and all that, but my training camps will be in Colorado.”

As the months went on, though, sniping began between all parties involved, only getting louder after Dillashaw lost his bantamweight crown to Dominick Cruz in January 2016. As Dillashaw looked to rebound and get a rematch with Cruz, Garbrandt went from prospect to contender with wins over Augusto Mendes, Thomas Almeida and Takeya Mizugaka, and at UFC 207 in December of last year, he became champion with an upset victory over Cruz.

Dillashaw, who bounced back from the loss of his belt with wins over Raphael Assuncao and John Lineker, now had a clear path back to the title, and it meant a fight with his former teammate.

First, the two would square off as coaches on season 25 of The Ultimate Fighter, a season entitled, “Redemption.” And while that title referred to the competitors looking for another shot at the UFC through a second trip on the reality show, Dillashaw had another, more personal, meaning in mind.

“I think the redemption theme for me is redemption against my old team (Team Alpha Male), the guys that have kind of burned me, the guys that stabbed me in the back a little bit,” he said before the show aired. “My redemption is proving them all wrong, showing that I did make the right choice in my life and telling my story. Everything’s been in the public eye so much about me moving and following (coach) Duane (Ludwig) out to Colorado. But I don’t feel like the true story has ever been told.”

As for the new champion, the usually laid-back manner of Garbrandt amped up in intensity when talking about Dillashaw.

“I was never friends with TJ,” he said. “TJ tried to play the victim on the show. In all actuality, he sold out. I would never do that.”

Dillashaw’s squad would dominate on the show, winning six of eight first-round matchups before closing things out by having all four semifinal slots filled by the blueshirts. But Garbrandt was content knowing that his fists would get the last word in November.

“It’s gonna be a fun fight,” Garbrandt said. “When I fight with rage and passion, the more I get into it and just love it. Now karma’s coming back to him. I’m karma, and I’m the meanest karma there is in the world.”

Dillashaw wants his belt back, though, and he’s using what he learned about Garbrandt on the show to propel him back to the top of the bantamweight division.

“You definitely learn some new things about his character and who he is,” Dillashaw said. “In my mind, he’s not a very good person; he’s about himself and very selfish, and that also comes across in training. I saw a lot of new things that I’m going to be able to use to my advantage in this training camp and in our fight. I don’t feel like he shows anybody any respect. He’s got a chip on his shoulder and I can’t wait to make him pay for it.”

Two years in the making, this rivalry gets 25 minutes or less to be settled this fall.