One look at the internet over the weekend and it was clear that Ronda Rousey’s loss to Amanda Nunes was the big story after Friday night’s UFC 207 card. But the best story was turned in by Mr. Cody Garbrandt, the new UFC bantamweight champion of the world.

Forget the master class turned in by the 25-year-old against one of the finest mixed martial artists of this – or any other – era in Dominick Cruz. That was newsworthy enough. But it was what happened after Bruce Buffer bellowed “And New…” that should have made front page news.

As Garbrandt collected his new championship belt, he placed it around the waist of 10-year-old Maddux Maple, celebrating the one fighter “No Love” will always be in awe of.

Fans of mixed martial arts will be familiar with Maddux’ story, as his fight to beat leukemia has mirrored Garbrandt’s rise to the top of the 135-pound weight class. Literally. Because when the two first met, it wasn’t a case of a star pro athlete meeting a star struck fan and signing some memorabilia for him and taking a few photos.

Maddux was just five and already in the fight of his young life. Garbrandt was an 18-year-old amateur fighter with heavy hands and every opportunity to take the wrong road in a rust belt city that swallows up tough, scrappy fighters at a frightening clip. They were polar opposites who still had everything in common.

Both were made of sturdier stock though. Maddux was as tough as they come, and Garbrandt was determined to break a destructive pattern that ran through his bloodline. And it was in each other that they found their strength and motivation.

“The kid’s so strong and so optimistic about life at that young of an age that it’s very motivating,” Garbrandt told me before his UFC 189 win over Henry Briones in July 2015. “It puts life in perspective, so I’m very thankful for Maddux coming into my life. It might have been in unfortunate circumstances at the time, but we made the best out of it.” 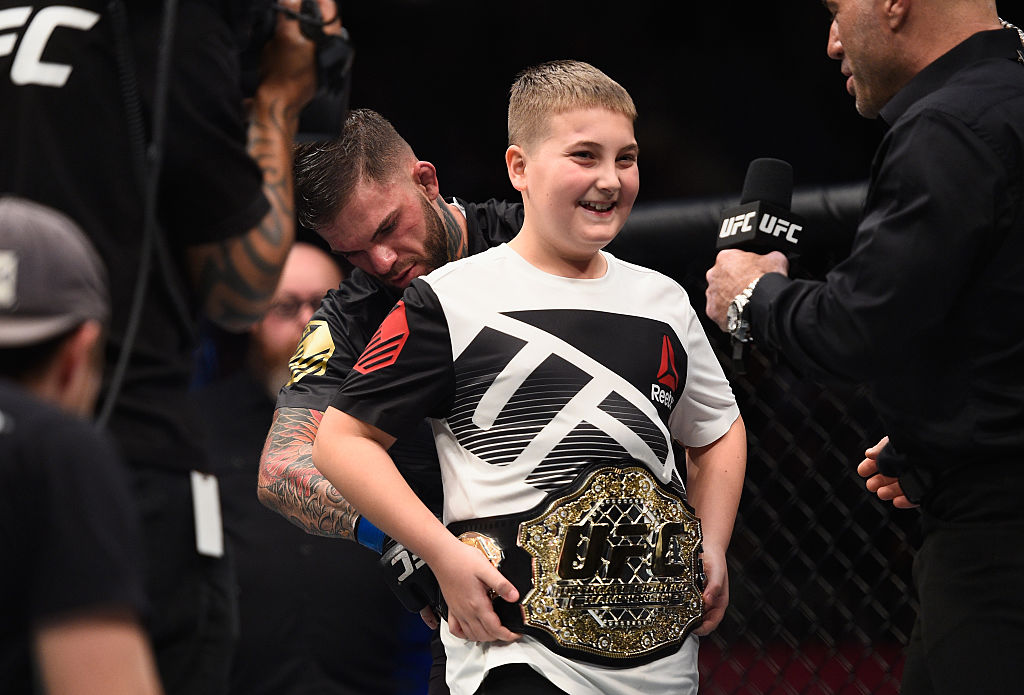 By the time Garbrandt fought Briones, Maddux’ had beaten cancer and Garbrandt was on the fast track to a bantamweight title. Each step of the way, Maddux was by his side, a brother now and not just a friend, a bond forged through fires most of us couldn’t imagine.

If the story ended there, it would have been Hollywood-esque.

“Look at us now, getting to walk to the cage in the UFC,” Garbrandt said at the time. “He couldn’t even walk a year and a half ago. He’s so excited about the walk. We talk almost every day, and just being able to share that moment with him, it’s something that I’ll be forever grateful to the UFC for allowing this opportunity and letting this kid live out a dream.”

Garbrandt’s end of the dream would come last Friday night. With just 10 professional bouts under his belt, the Uhrichsville, Ohio native did what every fighter hopes to do on the biggest night of his life: Fight the perfect fight.

Against Cruz, unbeaten for over eight years and who had never lost at 135 pounds, Garbrandt was faster, stronger and simply better than the champion. It wasn’t a case of the 31-year-old Cruz turning old overnight. It was a case of Garbrandt being the better fighter at T-Mobile Arena on Friday.

And now the fun begins. Do we see a rematch with Cruz or a showdown between Garbrandt and his former teammate TJ Dillashaw? Will Garbrandt, still just 25 years old, have a long reign at the top, or will the aforementioned duo or the host of young guns like Jimmie Rivera and Aljamain Sterling be the one to topple him?

That’s the reality of being a champion. Now all the arrows are pointed at the bull’s eye on Garbrandt’s back. But if past history proves anything, it’s that Garbrandt can handle matters inside an eight-sided cage without blinking an eye. That’s the easy part.

The hard part was escaping a place that could have kept him down, to break the pattern his biological father laid out for him, to make all those minivan trips his mother made to wrestling tournaments for him worth it, and to help a friend beat cancer.

All of a sudden, a fight, with gloves and a referee, seems like easy work.

“I’m out here chasing a dream,” Garbrandt told me before his May win over Thomas Almeida. “If I happen to get my ass whupped, then I’m ready for that ass whuppin’. I’m not gonna dwell on it. I’ll get better. And if the worst thing that happens in my life is that I lose a fight in the UFC, then I live a pretty good life.”

It’s a better life now. Cody Garbrandt is a champion. And so is Maddux Maple.

“He doesn’t know how much he changed my life and helped me out in my life,” Garbrandt said in 2015. “We helped each other to get to where we’re at now. He’s in remission and I’m in the UFC and that’s something we made a promise to each other about. To be able to do that and stand by a promise is something I’m thankful for every day. We did this journey together.”