Garbrandt Reflects on another Promise Kept 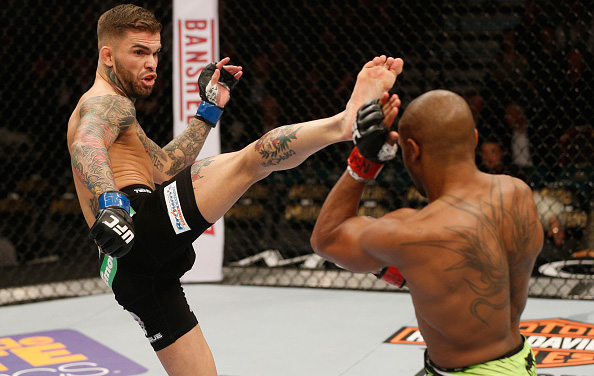 Undefeated bantamweight prospect Cody Garbrandt won’t ever forget his experience at UFC 189, but it has very little to do with his performance against Henry Briones.

Although the Team Alpha Male representative took to the cage and emerged with his second UFC win – and the seventh consecutive victory of his professional career – the truly memorable part of the event took place backstage before the fight and on the walk to the Octagon.

That night, Garbrandt got to share the UFC experience with Maddux Maple, the nine-year-old boy he made a promise to years earlier when he was still an amateur fighting on the regional circuit in and around his home state of Ohio. Maddux had just been diagnosed with leukemia, and when the two met, they became fast friends and a support system for one another – Garbrandt looking to Maddux for motivation on those tough days when he didn’t feel like going to the gym and Maddux using Cody’s effort to climb up the ranks as his push to keep battling cancer. 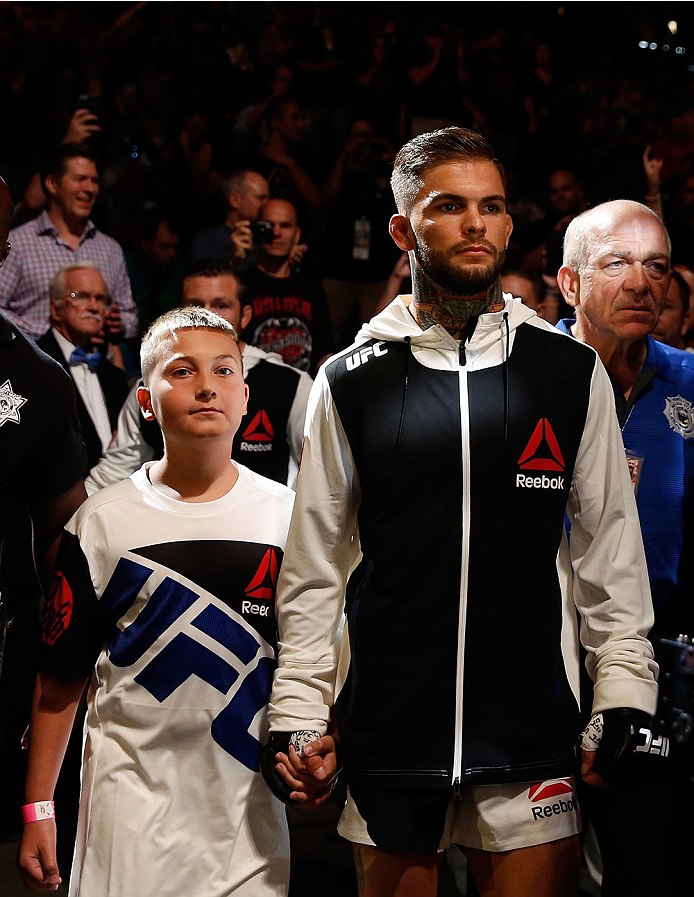 At one point, they made promises to one another, Garbrandt telling his young friend that he was going to make it to the UFC and Maddux telling the bantamweight prospect that he was going to beat cancer. On August 25, 2014, Maddux’ cancer was officially declared in remission. Less than five months later, Garbrandt would win his UFC debut in spectacular fashion, earning a third-round stoppage win over Ultimate Fighter alum Marcus Brimage at UFC 182 in Las Vegas as Maddux and his family looked on, cheering and fighting back tears.

Having kept their promises to one another, there was one other experience Garbrandt wanted to share with his young sidekick – he wanted Maddux to be able to walk him to the Octagon in the UFC just as they had done a number of times on the regional circuit.

The UFC loved the idea, giving Garbrandt the green light to have Maddux accompany him to the cage at UFC 189. As it turned out, the Ultimate Insider team was on hand to capture the moment when “No Love” got to give the good news to Maddux, who was rendered speechless after learning that his dream of accompanying his big buddy to the cage in the UFC was coming true.

“To be honest, I visualized it – us doing the walk – and tried to get myself mentally prepared for the emotional part of it, but I didn’t think I would be that emotional,” Garbrandt said, reflecting on the July 11th experience last week while serving as a guest fighter during UFC Fight Week in Saskatoon.

“I was back in the back and I couldn’t have that feeling I have when I normally come out of ‘Let’s go! Let’s bang!’” 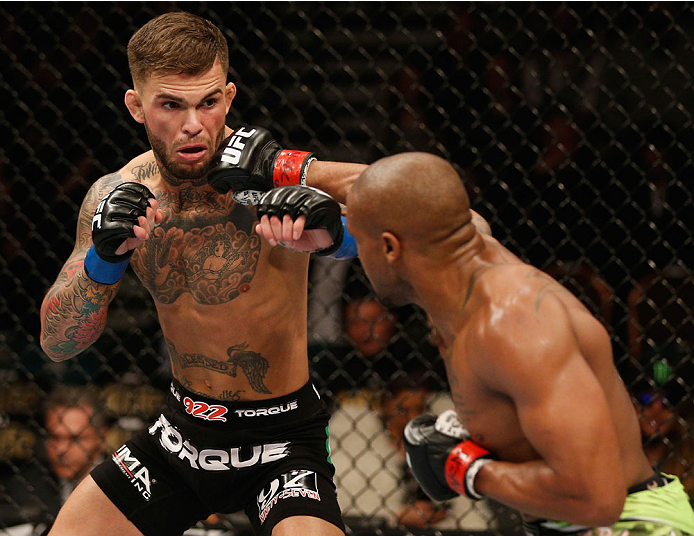 Garbrandt laughed. “I tried to get myself to be like that, but the thoughts of looking back on the last four-and-a-half years and Maddux fighting for his life, I couldn’t be mad. I couldn’t get that fire lit.

“There were so many emotions that I ran through walking down – I wanted to cry, I wanted to just hug him and tell him how much I love him,” the unbeaten bantamweight continued. “But then again, it’s like, ‘I’m not letting (Henry Briones) spoil this moment.’ This is Maddux’ moment.”

While Garbrandt was a ball of emotions prior to his fight and on the way to the Octagon, the young fighter that led him there was simply in awe of the moment.

“It was really awesome just being able to walk down there instead of at the little fights, so it was really fun,” Maddux explained on Tuesday afternoon, his one-year anniversary in remission.

The duo had made the walk on multiple occasions in the past, but never before a crowd as big and boisterous as the 16,019 people that packed the MGM Grand Garden Arena that evening. 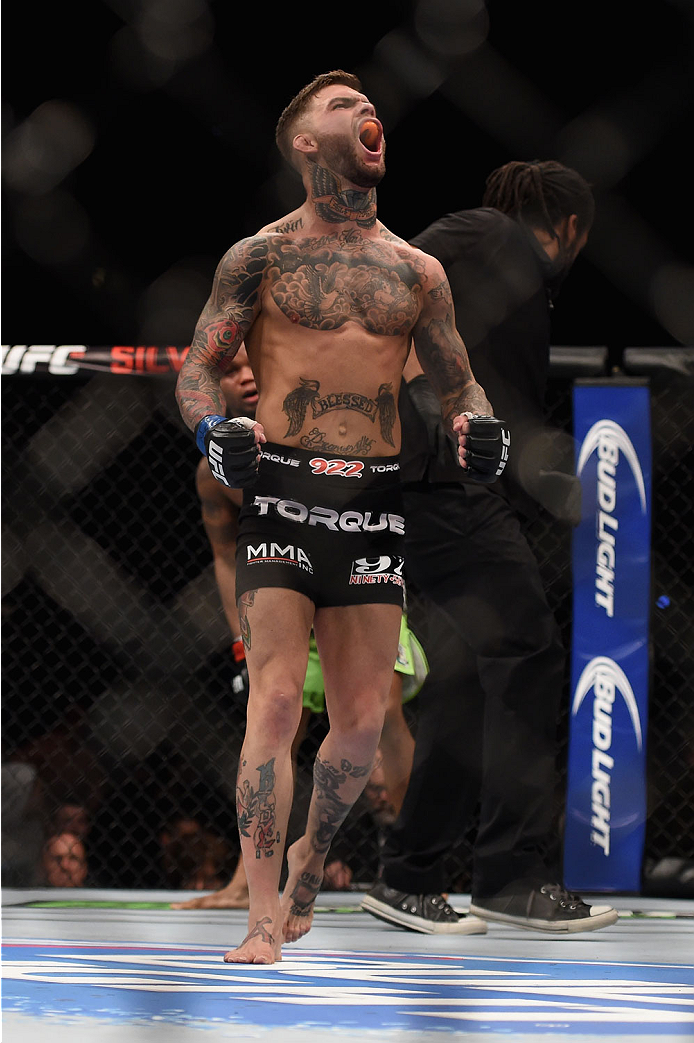 “I was a little scared, but it was really fun and I really enjoyed it,” added the nine-year-old, who spent the entire event backstage with Garbrandt and his teammates and got the chance to meet numerous fighters and UFC personalities, and even did an interview with Garbrandt following his victory on FOX Sports 1.

“We didn’t see him the whole night,” said Maddux’ dad, Mic, who couldn’t stop singing the praises of the UFC PR team and everyone that made this experience possible for his son. “We dropped him off at 2pm and didn’t pick him up until 11pm.”

It was a week to remember for Maddux and his family, who attended the weigh-ins on Friday as more than 11,000 energized fight fans sang soccer cheers and sent beach balls careening around the arena in anticipation of the fighters hitting the scales, and it culminated with an unforgettable night.

Although Garbrandt isn’t entirely pleased with his performance, that night wasn’t about going out and stealing the show – it was about sharing an incredible moment with Maddux and capping their UFC 189 journey with a win.

“I was a little tight,” the now 7-0 prospect, who hopes to return to the cage before the end of the year, admitted. “Honestly, I went in there not to lose and I haven’t fought like that in forever. I was still going for the finish and trying to knock him out, but I could have pressed a little more. But my thing was ‘Let’s get the win’ and that’s not how I fight.

“It was a good performance – I picked him apart, won the exchanges – but I want to go out there and knock people out, but that fight was different. That fight I just wanted to get in there and win the fight and do it for Maddux.”

That’s exactly what he did and it’s something neither of them – nor anyone else that got to share in their story or fortunate enough to have been touched by their friendship – will ever forget.