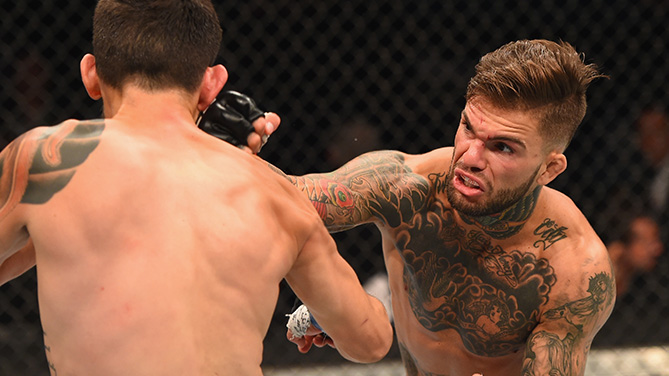 “I thought I could have finished that if I had just pulled the trigger,” Garbrandt said. “I know I had him rocked early in the fight – I need to pull the trigger more, I needed to do it more in my first UFC fight too, but that’s on me.”

Both fighters were tentative in the early going when it came to letting their hands go, and when they did, the strikes came up short. Garbrandt did get in some solid shots in final two minutes, and Briones scored well with the left, but the Ohio native surged ahead in the closing moments with a takedown and ground strikes.

Getting busier in the second, Garbrandt stalked Briones, eventually putting him on the deck with a right uppercut midway through the round. The now bloodied Briones got back up and even rallied a bit, showing signs of life every time Garbrandt appeared to be pulling away.

Presumably down on the scorecards, Briones took the role of stalker in the third round, and he looked to be getting the attention of Garbrandt as the clock wound down, forcing the Team Alpha Male standout to get a takedown to halt his foe’s progress. After rising, Briones landed some more had shots, but late flurries from Garbrandt left quite an impression on the Mexican battler.