Garbrandt-Dillashaw promises to be intriguing feud

Cody Garbrandt made sure to deliver a message to TJ Dillashaw immediately after upsetting pound-for-pound great Dominick Cruz to win the bantamweight title at UFC 207.

“Anyone can come get it. TJ Dillashaw, try me mother f***er,” Garbrandt said.

Garbrandt mentioned only one name in his post-fight Octagon interview, leading to the announcement that “No Love” will coach opposite Dillashaw on the upcoming season of The Ultimate Fighter.

Some of the greatest rivalries in the history of the UFC have played out on the set of the show. Matt Hughes and Matt Serra; Dan Henderson and Michael Bisping; Ronda Rousey and Miesha Tate.

The two top bantamweights have been linked ever since Dillashaw’s very public breakup with Team Alpha Male. The former champ had become champion under the TAM banner, but made the decision to defect to Denver, Colo. to follow coach Duane Ludwig in October 2015.

Dillashaw remains close to some former teammates, but Garbrandt isn’t one of them.

“If you’re not with us, you’re against us,” Garbrandt said on “UFC Tonight” in March 2016. “As far as a future fight with TJ, whoever is in the way of me getting the title, I’m willing to fight. TJ is one of them. Line them up and I’ll knock them all down.” 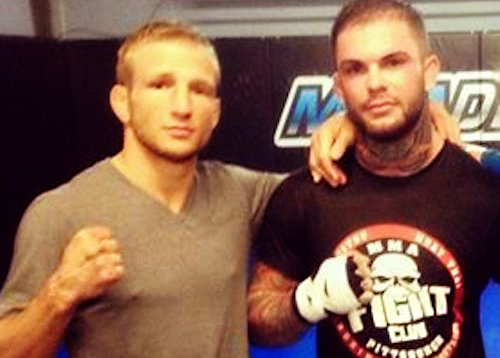 The circumstances have changed but Dillashaw remains the most logical fight for the new champion.

In a way, it’s almost a blessing in disguise that the Angels Camp, Calif. native exited Team Alpha Male. Garbrandt and Dillashaw have been on a collision course for years. Their gym sparring wars have already come up in the media.

Dillashaw said he won 75 percent of the sparring sessions with Garbrandt during his time at Team Alpha Male. “No Love” came back claiming he had Go Pro footage of a knockout in practice against the former bantamweight champion.

“I already knew what I did to Dillashaw. I was 1-0, green and just getting my ears wet,” Garbrandt said. “I was just a fighter at heart. I’ve been the uncrowned champion, even when Dillashaw was on the team.”

Since losing a close split decision to Cruz in January 2016, Dillashaw has been angling for another crack at the title he believes he never lost. He was thankful that Garbrandt won because it all but guaranteed another title shot.

Dillashaw is expecting the discourse to be personal and heated in the months to come before the fight and in The Ultimate Fighter house.

“I’m sure it’s going to be played up big time with all of the drama and stuff,” he said. “He knows I’m gonna bring it and I’m tough. He knows I know where to get him at.”