Former WWE superstar CM Punk now has an opponent for his pro MMA debut, as New Jersey’s Mickey Gall held up his end of the bargain at the MGM Grand Garden Arena in Las Vegas, submitting Mike Jackson in less than a minute in their UFC Fight Night welterweight bout.

Gall called Punk out during an episode of “Dana White: Lookin’ for a Fight,” and White, impressed by the gutsy move, signed Gall with the stipulation that if he beat Jackson, he would get the former pro wrestler.

“Very impressive,” Punk said of Gall’s performance. “That’s how I want to win a fight. That has to be a great feeling and I’ll find out after I beat Mickey Gall.”

“I’m blown away by his performance,” White added.

After a brief feeling out process, Gall dropped Jackson with the first right hand he threw, and from there, it was game over. A few hammerfists were followed by a rear naked choke, and Jackson tapped out. The official time was :45.

“I like to punch faces and choke people out,” Gall said.

There has been no date or site set for Gall vs. Punk as of yet. 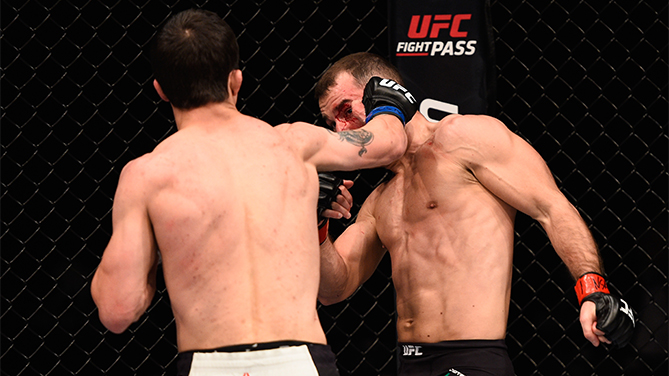 After losing a grappling-heavy match to Ryan Hall in the TUF 22 final last December, Dublin’s Artem Lobov wanted a fight against Alex White in the featherweight opener, and he got one. But it wasn’t the result he wanted, as White won a three-round unanimous decision.

Scores were 30-27 on all scorecards for Missouri’s White, who was making his first Octagon start since December of 2014.

There were plenty of competitive back-and-forth exchanges to kick off the fight, but in the final minute of the opening round, White began to pull away with a hard right hand that jarred Lobov (12-12-1, 1 NC), and he then scored a takedown to cap off a solid frame.

White (11-2) continued to use his height and reach advantages to their full extent in round two, getting in and out with ease while keeping Lobov – who was now bleeding from under his left eyebrow - from getting inside with his strikes.

The third was more of the same, with White mixing his striking and grappling nicely as he avoided Lobov’s late bombs and wrapped up the clear-cut victory.