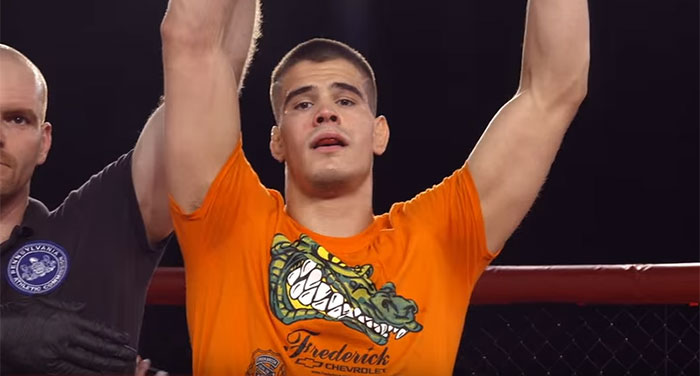 The UFC show on YouTube is called “Dana White: Lookin’ For A Fight.” But the UFC president found out on a recent trip to Philadelphia that Mickey Gall was looking for one as well.

And he got it. Well, not exactly the one he called for, but if the New Brunswick, New Jersey prospect defeats Mike Jackson during the UFC FIGHT PASS prelims at UFC 196 in Las Vegas on Feb. 6, he’ll get the fight he wants with former WWE superstar CM Punk.

Watch Episode 1 of "Dana White: Lookin' for a Fight" right now for free on YouTube

It’s a Cinderella tale with four-ounce gloves on, one that began with Gall submitting Ron Templeton in the first-round last November. Knowing that White was going to be attending the Dead Serious MMA event to get footage for “Lookin’ For a Fight,” the 23-year-old Gall had a plan.

“To be honest, I did not expect this,” he laughs. “I was tossing up a Hail Mary. I was like, look, if Dana White’s there, the only guy I could fight in the UFC is CM Punk. Who am I gonna call out? Robbie Lawler? No way, they’ll laugh in my face. But this fight could happen. They need a similar record - I’m 1-0, he’s 0-0 - and my Hail Mary got tossed, it got caught, and now I’m running with that.”

Since the show aired, life has changed considerably for Gall, and when the fight with Jackson was made official, things really went haywire.

“My phone’s been blowing up, my social media has gone crazy, and it’s been the craziest week and a half of my life.”

“I was tossing up a Hail Mary. I was like, look, if Dana White’s there, the only guy I could fight in the UFC is CM Punk. Who am I gonna call out? Robbie Lawler? No way, they’ll laugh in my face." -- Mickey Gall

Gall is taking it well though, because this is what he’s always wanted. And now he’s got it.

“I was always taught to work hard, and if you find something you love, work hard for it,” he said. “Both my parents have an amazing work ethic and they instilled that in me. And you’re gonna have to fight in this sport. So I’m ready. I’ve been preparing myself extremely hard since I was 16. I’ve been doing two a days for years, and I’m extremely ready. I love fighting. It’s very pure, and it’s a beautiful art to me. I can’t not do it, I love it.”

The win over Templeton marked his pro MMA debut, but Gall has also logged two amateur wins and owns a brown belt in Brazilian Jiu-Jitsu. Yet that 1-0 is the key when it comes to being considered for Punk’s MMA debut later this year. Gall knows it, but the big question is, was he a fan of Punk during his pro wrestling days?

“I was a big ‘Stone Cold’ Steve Austin fan back in the day,” he laughs. “I kind of went from pro wrestling to becoming an MMA fan, and once I found MMA, I was fully engulfed in that. But I guess I heard of him (Punk) a little bit the same way I heard of John Cena and those other big superstars. And when he talked about coming to the UFC, I was like ‘that’s interesting.’”

So interesting that he wants to fight him. On paper, it could be a 2-0 prospect (Gall) against a debuting Punk. Fairly even, some would say. Gall wouldn’t necessarily agree.

“I have a lot of respect for him,” Gall said of the man he one day may throw hands with. “He’s a self-made guy who made himself a superstar in one field, and now he’s moving over to another field, where it’s different. He’ll be used to the bright lights, but I think when he gets into the cage, he’s used to having a plan. (In pro wrestling) They knew who was going to win, and they know what’s going to happen for the most part. But I’m gonna be in there and looking to come at him with everything I have. I’ll be looking to hit him and hurt him, and I don’t think he’ll be ready for that.”

But will Mickey Gall be ready for everything that begins the week leading up to Feb. 6?

“I’m ready for it,” he said. “I’m having a lot of fun with all this and I feel good. To be honest, right now my thoughts have shifted and I’m completely focused on Mike Jackson. That’s all I can see, all I can think about. My life only exists after February 6th – until then I have one goal in mind, and after that, I’ll remember who CM Punk is again. But I want this so bad, I won’t let anything get in my way and prevent what needs to happen.”