Gagnon Taking It One Goal at a Time

"I don’t want to just say I made it to the UFC. I want to make a good run at this." - Mitch Gagnon 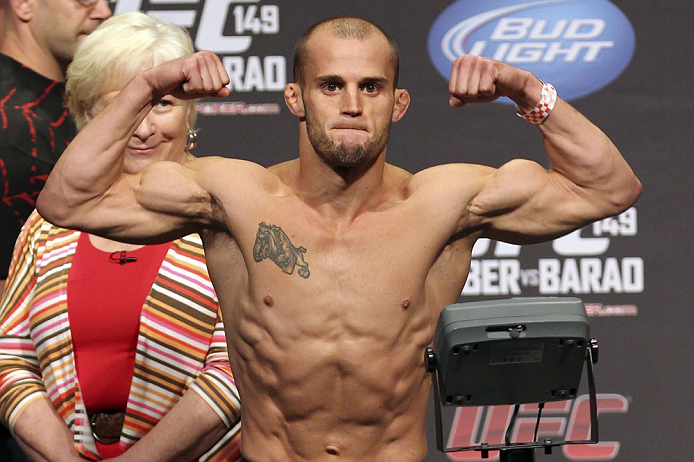 It was October 2011 in Montreal’s Bell Centre and Canadian fighter Mitch Gagnon (8-2) was staring across the cage at David Harris, a fighter from Detroit, Michigan. Both fighters were riding win streaks of three or better and Harris was making a splash north of the border.

For Gagnon, who was making his bantamweight debut, it was the moment of truth.

“I fought mostly local talent up until Harris, who is American,” he said. “He was considered the Canadian Killer, and he was walking through the bantamweights here in Canada.”

The two fighters met in the center of the cage and Harris sent Gagnon stumbling backwards after glancing him with a head kick. Mitch answered with several inside leg kicks before Harris dove in for the takedown – his first and last mistake of the match – as Gagnon quickly secured a guillotine, forcing the tap at just 2:09 of the first round.

“I put a stop to that pretty quick,” Gagnon said. “It was really at that point that I felt like I deserved the shot in the UFC, but I always feared that unknown of how UFC fighters really are.”

Gagnon found out first hand at UFC 149 in Calgary, Alberta, Canada, where he got the call up to the big leagues to take on a tough-as-nails Bryan Caraway.

“The minute I grabbed Bryan Caraway and the way my positioning on him was really great, I felt I belonged in there,” he says. “Even though I lost that bout, I feel like I can match up well with any fighter in the bantamweight division.”

Indeed, Gagnon has nothing to be ashamed about in suffering his first loss in over three years against Caraway. Their fight was a war of attrition, with both guys being dominant at several points during the fight, and Gagnon nearly finishing Caraway with vicious ground and pound in the first round. The two bantamweights eventually took Fight of the Night honors, earning them both an extra $60,000 for their crowd pleasing efforts.

“The experience was awesome,” says Gagnon. “I enjoyed it right up to the moment I lost. I really felt like I belonged. It was hard because I hadn’t suffered a loss in three years so I forgot how that felt. But it made me a better fighter. I got to look back to see what I did wrong and what I could have done better.”

Gagnon next faces Walel Watson (9-4) at UFC 152 in Toronto, Ontario, Canada on September 22nd.  For this camp Mitch – who usually fights bigger guys at Sudbury, Ontario, Canada’s Team Shredder, where he has a personal fitness and training business - headed north to train with Antonio Carvalho, a fellow UFC bantamweight who himself made an impressive showing at UFC 149 with a knockout of Daniel Pineda.

“I felt like I needed to train with other bantamweights,” says Gagnon. “It’s different fighting 170 pounders and then fighting 135 pounders. They’re faster down at this weight so I needed to get time in with faster guys.”

In Watson, Gagnon faces a dynamic striker who is also very tricky on the ground.

“Walel is really tall,” says Gagnon. “He likes to throw head kicks and his length allows him to throw these weird angle submissions that most other guys just can’t. He throws these anaconda chokes at these really weird angles and you have to be aware of that and be cautious of that. I’m sure he’s working a lot on his wrestling. I’m thinking he’s going to try to stuff my takedowns, but I’ve got a really good game plan and I know what I have to do. I’ve been drilling and drilling a lot.”

Aside from drilling technique, Gagnon is also dieting better and approaching this weight cut a bit more scientifically then he did for the last two cuts to bantamweight.

“I cut 17 pounds during fight week last time and I think that’s too much for any bantamweight,” he said, adding that the tough cut might have contributed to what he considers a poor performance against Caraway.

“I think there was a point in that first round where I could have stopped hitting him while he was recovering,” he says. “My fighting style is really high paced and I thought I was conditioned enough to sustain that pace throughout three rounds, and leading up to the fight I think my weight cut was a little rough as well. That was only my second time fighting at 135 and the first time I did that I also had a hard cut but that fight only lasted two minutes. I didn’t really know how the weight cut was going to affect me over three rounds, so looking back on that fight, for this next fight I’m making sure my diet is good and that I’m leaner going into the cut so that it’s not too hard.”

For any fighter, the UFC is the biggest deal going, and Gagnon is taking his opportunity as seriously as one can get. He is focused full-time on his next fight, leaving his personal training clients to two colleagues in Sudbury so that he can train full time. He’s also left his fiancé back home.

“She’s never once told me to miss a training session or to not go away for camp,” he said. “She’s very supportive. I have a lot of support from my family, my sponsors and the local community, so that I can focus 100 percent on Walel Watson and nothing else.”

And while for most guys a Fight of the Night bonus might take away the sting of a loss, for Gagnon, he’s not in it for the money, although it does help.

“The bonuses in the UFC are great and if I’m smart with my money it will help me be better financially, but I’m a short-term goal setter. I like to set little goals and go out and meet them. Right now my goal is to get the W against Walel,” he said. “But I don’t want to just say I made it to the UFC. I want to make a good run at this. I feel like I can beat guys in the division and I can have a long career with Zuffa.”