Gaethje: I can't wait to make James eat every word 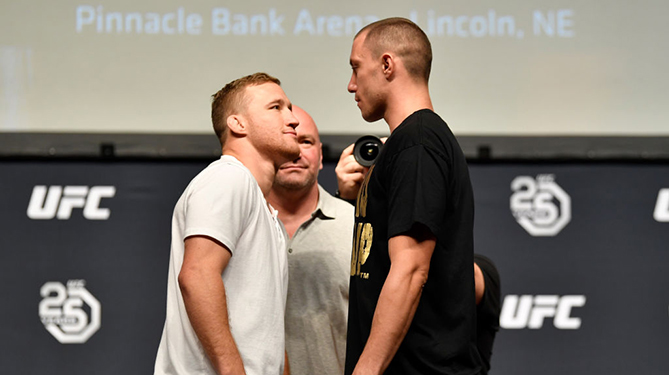 On Saturday, Justin “The Highlight” Gaethje will clash with James Vick in the capital city of Nebraska. Both fighters have exchanged words on social media and at the UFC 25th anniversary fall press conference leaving no doubt that this main event in Lincoln is going to be heated.
We caught up with Gaethje to talk about his camp leading up to Lincoln, wrestling, talking trash with Vick, the mental aspect of fight and what we can expect from him during the August 25th showdown.
UFC: It’s finally fight week! How does it feel to be ready to go?
Gaethje: It’s great. One thing you learn early in this career is to deal with the anticipation leading up to a fight. I do 12 weeks of camp and each day you gotta go in and [work], there is no rush. You can’t speed up time I wish I could but I can’t, so I take one day at a time and be prepared.
UFC: You spent a little time at the UFC Performance Institute during this camp. How was that?
Gaethje: I went out there for a week, this was my first time it was great. I got some great training at Xtreme Couture and talked with the nutritionist Clint Wattenberg at the PI he got me some solutions to some problems that I was having with retaining water. And trying to keep my weight on, I have problems that are different than other fighters. I can’t keep my weight on and that’s been my focus for a lot of this camp.
UFC: What’s something that you’ve added to your tool box since the last time we saw you?
Gaethje: Since the last time I fought I’ve brought my wrestling coach in from college, he’s a Division I national champion, just to get that cardio. Wrestling is a different kind of cardio. I wrestled my entire life and I’d never fought in my life, I’d never put on boxing gloves, never sparred, never hit pads. My first five MMA fights I went in there as a pure wrestler and after that I found my coach Trevor Whitman and I’ve really been focused on MMA. If I wanted to fight at the top level or anywhere near it I had to get some kind of stand-up experience.
So that’s what I’ve been focused on for the last four or five years and you know, you can go away from something for long enough and no matter how long you did it, you’ll start lose some things. The basics go first so I’ve been taking out 100, 200 double legs this camp, back to keepin’ my head-up, back to not shootin’ to my knees. You know, the small things. 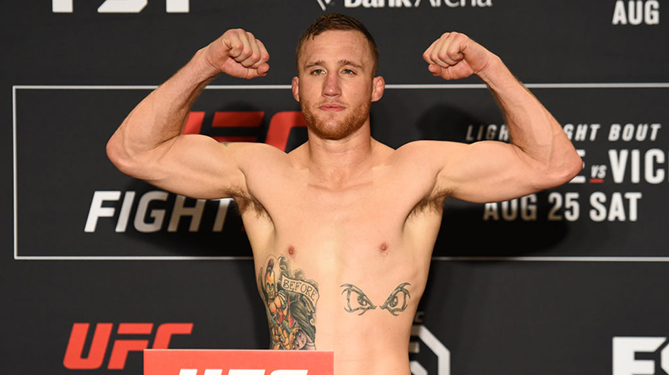 UFC: How has wrestling shaped you as a fighter?
Gaethje: I think the mindset that I’ve gained from wrestling my entire life has carried me through up to this point and will carry me for the rest of my career. Being in bad positions and overcoming circumstances is what wrestling taught me. You’re not always going to be the hammer, sometimes you gotta come through and face adversity.
UFC: You and Vick have been talking a little bit. Do you like having a little something to say to your opponent?
Gaethje: Yeah I love it. I’d much rather fight someone that I don’t like than I do. This is gonna be fun for me I can’t wait to make James eat every word that has come out of his mouth. It’s gonna be fun.
UFC: Do you feel that you’re Octagon pressure is something that he’s not ready for?
Gaethje: It’s something that you have to mentally prepare for. I think that Eddie and Dustin both mentally prepared for the type of fight they were gonna have to endure to come out on top, I mean hopefully not. But I mean the stuff that’s coming out of his mouth leads me to believe that he’s not mentally ready for what I’m going to put him through. He’s a skilled fighter, he’s got plenty of skills he can knock me out he’s got plenty of power. Top 10 in the UFC that’s nothing to joke about but my pressure will break him. It will break him slowly but surely.

Earlier this week I caught-up with @Justin_Gaethje & we talked about the mental aspect of fighting in the @UFC, as well as how he's grown mentally stronger throughout his UFC tenure. #UFCLincoln pic.twitter.com/fF59tJUMuU
— Gavin Porter (@PorterUFCnews) August 24, 2018

UFC: How big is that mentality aspect to this game?
Gaethje: It’s huge. I mean we get in there are we fight in front of one, two, three hundred thousand people. It’s something that’s normal, it’s not something that you that just wake up and you’re ready for. Especially in the UFC, it’s a whole different beast they’re the hype machine. It takes some getting used to, no matter how prepared you think you are experience is a factor. And now that I’ve had three fights in here it’s easier for me to go in there, it’s easier for me to control my emotions, it’s easier for me not to get caught up in the hype machine which is the UFC.
UFC: How do you take care of business on Saturday?
Gaethje: We’re going to see how many licks he can take to his leg, I’m going to go out there and I’m going to chop his legs off. Legs kicks have been a factor in every single one of my fights I definitely have to stay in better position at all times, I need to understand that it takes one shot. This is a crucial fight for me, I’m coming off of two right now so I can’t go out there and throw caution to the wind as much as I have in the past and I’m alright with that. We’ll see how it goes.