The highly-anticipated UFC debut of Justin Gaethje lived up to all expectations and then some Friday night at T-Mobile Arena, as the unbeaten former World Series of Fighting champion stopped lightweight contender Michael Johnson in a wild two-round war that will be hard to top for Fight of the Year honors when December rolls around. 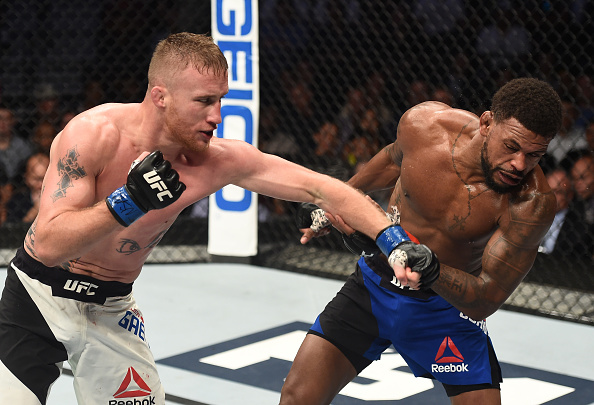 The two began trading immediately, with Johnson briefly staggering Gaethje with a left hand. Gaethje jumped back into the fray, and some hard punches followed by a knee evened the score with “The Menace.” From there, it was Gaethje putting the pressure on while Johnson was forced to fight off his back foot. Both fighters were getting shots in and the crowd was loving it. Midway through the round, a left hook wobbled Johnson, but the St. Louis native kept firing back. Gaethje’s shots had more on them though, and as the Coloradan mixed in leg kicks, he was clearly getting the better of the action. With 30 seconds left, though, a right uppercut rocked Gaethje and know it was Johnson’s turn to seek the finish. He didn’t get it, but it was some end to the round for Johnson.

A right hand in the second minute of round two had Gaethje on the verge of getting stopped once more, but again “The Highlight” weathered the storm and got back into the pocket with Johnson. Gaethje went on to drill Johnson with a knee and several uppercuts with less than 90 seconds left, and Johnson was bloodied and barely able to stand. Finally, with Gaethje still pouring it on, referee John McCarthy intervened, stopping the fight at 4:48 of the second round.

And as soon as it was over, Gaethje was ready for more.