Gaethje to continue search for his equal in Alvarez bout

Justin Gaethje still isn’t sure how he managed to stay upright during his thrill-a-minute UFC debut against Michael Johnson back in July.

For just under two rounds, the pair bombed on each other with reckless abandon. Fundamentals went out the door in favor of firing off crushing blows designed to stop the fight on a dime. While both men landed several massive punches that would have felled most mortals, Gaethje somehow managed to absorb everything Johnson had to offer and keep pressing forward, eventually putting away the former Ultimate Fighter finalist under a hail of heavy punches and a well-placed knee along the cage as the final seconds of the second round ticked off the clock. 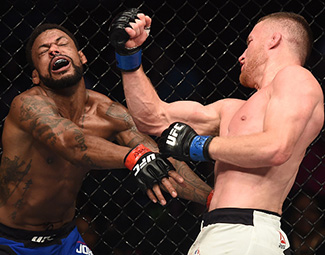 The Ultimate Fighter Finale at T-Mobile Arena on July 7, 2017 in Las Vegas, Nevada. (Photo by Brandon Magnus/Zuffa LLC)" align="right" /> “When I watched it, I still can’t,” Gaethje says, pausing to find the right word as he recalls the early summer Pier Six brawl that has to be the clubhouse leader in the Fight of the Year discussion at this point. “I’ll never understand why I didn’t go to sleep on that left hand that he landed. I don’t get it.”

When he says “that left hand that he landed,” there are myriad options to choose from. It might be the one that backed him up a couple steps right out of the chute. Maybe it’s the two-piece that put him on the canvas momentarily towards the end of the first.

The most likely shot, however, is the short counter that landed flush and turned Gaethje into a baby deer taking its first steps in the center of the Octagon 80 seconds into the second round. Even after watching the fight back countless times and knowing what transpires, it’s still difficult to fathom that Gaethje not only stays upright, but rallies to finish the contest before the round is over.

But then again, that’s just what the unbeaten Arizona native does.

A big part of what had everyone in the mixed martial arts community excited about his arrival on the biggest stage in the sport is that Gaethje had spent the previous three years turning in savage performances under the World Series of Fighting banner, amassing 10 straight victories with his unrelenting, forward pressure and devil may care offensive approach.

When he landed in the UFC, the 29-year-old former Division I All-American wrestler from the University of Northern Colorado lobbied to face the toughest opponent available and admitted that his high-risk style was going to lead to him getting knocked out in vicious fashion somewhere down the line, but he had no intention of changing his approach.

Somehow, his debut still managed to exceed the hype and now his sophomore appearance comes against Eddie Alvarez, the former lightweight champion and another fighter who has been lauded for his toughness and tenacity throughout his career.

Following that win over Johnson, Gaethje stated his bona fides before asking a simple question, saying, “I’m 18-0 with 15 knockouts. Where’s my equal?”

Could Alvarez be that guy? 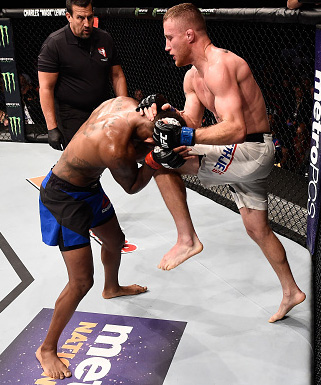 “Time will tell, I guess, huh?” he says simply. “Hopefully Eddie’s not blowing smoke up all our asses and he actually comes out and fights and doesn’t try to take me down or hold me against the cage like I assume he will.”

Alvarez has declared that this contest will determine who is “the most violent man in the UFC,” which is music to Gaethje’s ears.

“I’m pumped,” he says of the showdown with Alvarez on Saturday at Little Caesars Arena. “I’m excited that the UFC trusts in my skills to give me these opportunities, and preparation is everything. I’ve put 10, 12 weeks into preparing for this fight and I’ve just got to go in there and put my skills on the line.

“It is fighting and fighting is violent and I want to be known as the most violent (fighter in the UFC). I’m trying to build a brand. I’ve started a business called “The Violent One” and I like to go in there and finish as quickly and as violently as possible.”

While some fighters approach each contest with a strict game plan and work tactically inside the cage, Gaethje resides at the other end of the spectrum.

Training camp is spent putting everything together – logging hours on the mitts with his head coach, Trevor Wittman; studying tendencies and tells, doing the work required to push a breakneck pace and be able to absorb the kind of punishment he can’t seem to avoid once the fight begins and still soldier on.

But once the introductions are over and it’s time to get down to brass tacks, Gaethje relies exclusively on instincts and reactions.

“In the middle of the fight, I can’t recall ever having a thought process and that’s the way I like it. If you’re taking the time to think about something, you aren’t reacting and you aren’t fighting; you’re probably hesitating. If I was going to say, ‘I don’t want to get hit like that again,’ then I’m going to start hesitating. 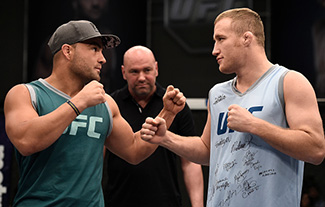 “Maybe it’s not the smartest thing, but you can’t hesitate – you can’t hesitate for a split second – so I will never let myself have a thought process. If I do, I’ll tell myself to stop immediately and keep fighting. It’s all about preparation.”

And he is prepared to deliver another memorable performance against Alvarez this weekend in Detroit.

“First and foremost, I have to win, but I think the name of the game now is how you win,” he says. “If I go out there and finish him in brutal fashion like I need to, like I want to, that brings more opportunities and bigger fights my way. If I go out there and win a boring decision – which I would rather lose than do that – it doesn’t do too much for my stock.

“I’m trying to build my stock right now and it’s all about having exciting fights. I’d rather get a Performance of the Night bonus on this one because if it’s Fight of the Night, it means I went through another war, but I’m all for it.”