Gadelha Wants Title, but Only After Aguilar 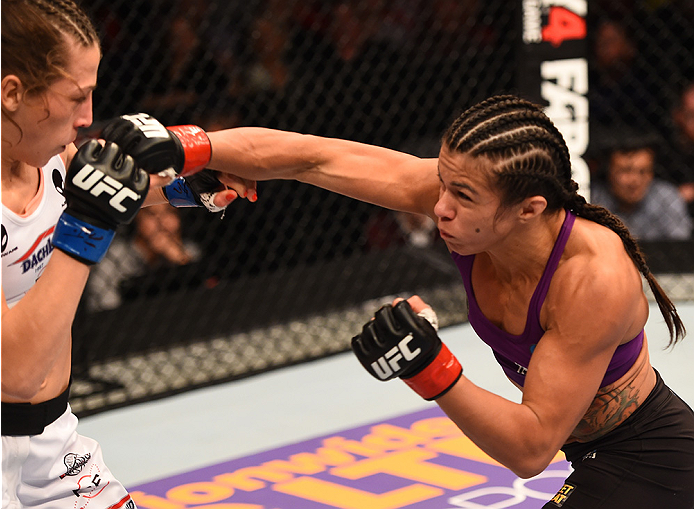 Just like the ground game that earned her a Brazilian Jiu-Jitsu black belt and half of her professional MMA wins, Claudia Gadelha prefers efficiency to flash in interviews. If you win, then you can talk all you want, but until then, it’s all about the fight ahead, not about one that could happen.

“Jessica is in my way and I'm concentrating on her,” the Rio de Janeiro product said. “The next step will be the consequence of my job Saturday night inside the Octagon.”

“Jessica” is Jessica Aguilar, widely considered to be the best strawweight on the planet until fighters like Gadelha and the UFC’s 115-pound champion, Joanna Jedrzejczyk, became household names in the house known as the Octagon. As for that aforementioned fight ahead, Gadelha is referring to the one fight everyone is talking about, a rematch with Jedrzejczyk should the Brazilian defeat Aguilar at UFC 190.

In December of 2013, Jedrzejczyk won a razor-thin split decision over Gadelha in Phoenix. The Polish star went on to win the strawweight title, while “Claudinha” has been hampered by injuries. Gadelha hasn’t let that loss, the first of her career, go, and she’s eager to meet up with her rival a second time, this one with the belt on the line.

“I won that fight,” she said. “In my head and in my heart I'm an undefeated fighter. I don't know what fight the judges saw. The only moment she got was the last 10 seconds of the first round and we will have to fight again to prove who the best is.”

Given the fact that Jedrzejczyk has looked progressively more intimidating since their first bout, stopping Carla Esparza and Jessica Penne, Gadelha’s desire to settle the score is even more impressive, but that’s the kind of fighter the 26-year-old Mossoro native is, and that attitude, coupled with her talent, has led her nation to embrace her and women’s MMA.

“It's growing so much and I love it,” she said. “We will have a lot other great fighters from here in the future. Brazilians love MMA and we are doing beautiful work. I also feel so much love from everyone. That helps me to keep improving and fighting for my people.”

Bethe Correia will be the first female fighter from Brazil to challenge for a UFC title on Saturday when she faces Ronda Rousey for the bantamweight crown in the UFC 190 main event. But most assume that the one who is the favorite to be the first from her nation to wear championship gold is Gadelha, who compiled an 11-0 record before entering the Octagon in July of 2014, when she defeated Tina Lahdemaki. It wasn’t spectacular or highlight-reel worthy, just a performance from a young fighter entering her prime, and one who admits to just a touch of the first-time UFC jitters.

“There were some,” she said. “But I was more happy to be there than nervous. My dream was coming true so I had to celebrate that walking to the Octagon.”

And despite the time off due to injury and the loss to Jedrzejczyk, the Nova Uniao standout has no complaints.

“This is the consequence of all the hard work I have done in the last 10 years, and I'm improving and developing my game every day.”

She’s also more than ready for Aguilar, who she respects, but doesn’t fear.

“We fought some grappling tournaments before, and I think she has done a lot for WMMA,” Gadelha said of her opponent. “She is well-rounded, as I am, and I think everything she does, I do better.”

There it is, that “to the point” thing again. Get used to it though, as fans can expect more of that this weekend and in the future.

“The fans will see an aggressive, fast and powerful fighter going out there to leave everything inside the Octagon.”