Gadelha stuns Kowalkiewicz in Round 1 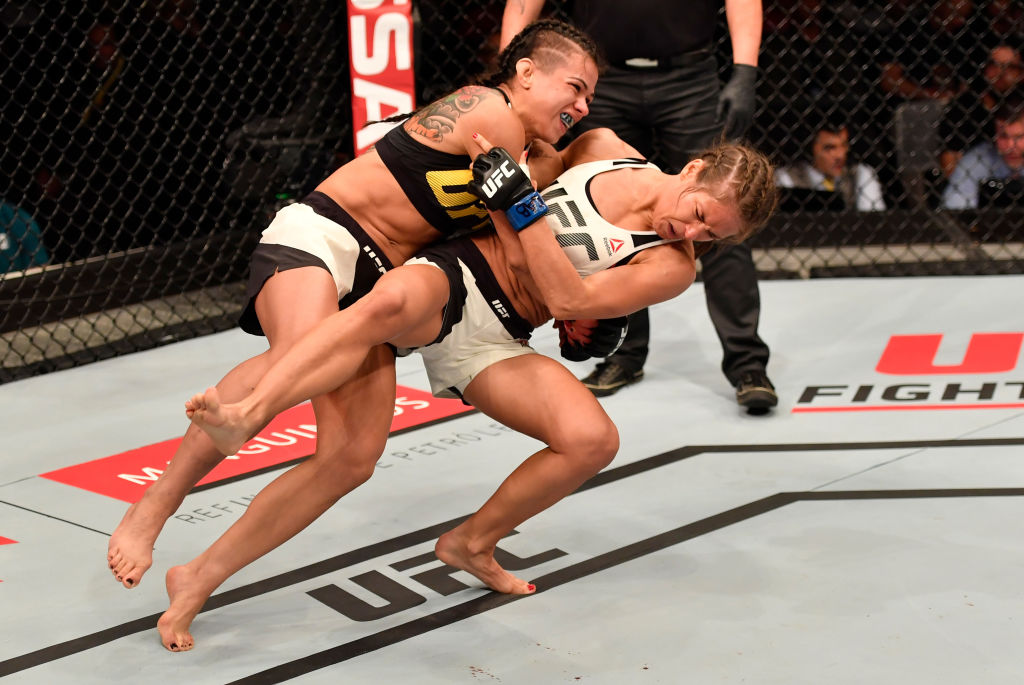 If top-ranked strawweight contender Claudia Gadelha wanted to make her case for a third fight with 115-pound champion Joanna Jedrzejczyk, she did just that in the co-main event of UFC 212 at Jeunesse Arena in her hometown of Rio de Janeiro, as she submitted No. 2-ranked Karolina Kowalkiewicz in just over three minutes.

“I am a new fighter,” Gadelha said. “This is the new Claudia right here. It’s going to be hard to beat me “

The first clinch of the fight saw Gadelha rip off a huge elbow that drew a roar from the crowd and got the attention of Kowalkiewicz. The Lodz native wasn’t deterred from her plan though, as she shot in and out with quick strikes. Midway through the round, though, Gadelha got the takedown and got her opponent’s back. Moments later, the rear naked choke was in and Kowalkiewicz was forced to tap, the end coming officially at 3:03 of round one.

Brazilian fighting icon Vitor Belfort wasn’t his usual explosive self in his hometown of Rio de Janeiro, but he left the Octagon with another win, as he went the distance for the first time since 2007 in beating Nate Marquardt via unanimous decision.

Marquardt got the fight to the mat in the opening minute, but after the action stalled, referee Osiris Maia stood the fighters up with three minutes remaining. That didn’t ignite the action, though, as there was little significant offense shown from either man for the rest of the round.

Coming out strong to start round two, Marquardt had his moments before Belfort roared back with several hard shots that had the Coloradan in trouble briefly. Marquardt recovered well, cutting Belfort over the left eye as he upped his work rate.

Marquardt controlled much of the final round as Belfort showed little urgency, but “The Phenom” did come alive briefly in the final 90 seconds, jarring his opponent with some hard shots, and it may have been enough for him to steal the round and the fight. 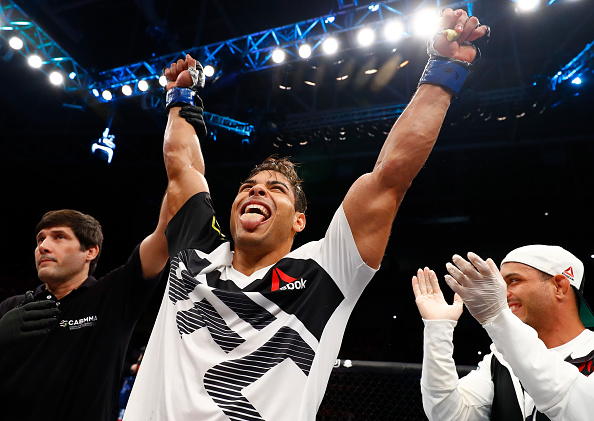 Rising middleweight star Paulo Borrachinha may have been forced into the second round for the first time in his career, but the result was the same, as he kept his unbeaten record intact with a TKO of Oluwale Bamgbose.

Bamgbose got Borrachinha’s attention immediately with a right hand, and in the second minute, the New Yorker got a brief takedown. Borrachinha stayed calm under pressure, and soon, Bamgbose began to slow down after his furious start. A couple hard body kicks put Bamgbose on the defensive, and Borrachinha went all out to finish his foe. Bamgbose used a takedown attempt to get his bearings back, and he got it, keeping his foe locked up until the round ended.

With his gas tank on empty, Bamgbose tried to make something happen early in round two, but when he slipped to the mat after throwing a high kick, that was all Borrachinha needed to end the fight, as he fired off several blows without a response, causing referee John McCarthy to halt the bout at 1:06 of the second stanza.

Minas Gerais’ Borrachinha moves to 10-0 with the win. Bamgbose falls to 6-3.

Yancy Medeiros continued his resurgence at welterweight in the main card opener, halting Erick Silva in the second round to move to 2-0 in the Octagon at 170 pounds.

Silva got rocked in the second minute of round one but he smoothly got out of trouble and began kicking his offense into gear, something Medeiros was already taking care of. With two minutes left, both fighters began taking turns tagging the other with big shots, and while Medeiros looked to have the slight lead, it was Silva who scored a flash knockdown in the closing seconds.

The fast pace continued into round two, Medeiros sprinting in front but Silva settling in to land several hard blows. But two minutes in, a left hook by Medeiros put Silva on the floor, and the Hawaiian didn’t let him recover, with several hard shots prompting referee Eduardo Herdy to halt the bout at 2:01 of the second stanza, much to the dismay of Silva, who vehemently protested the stoppage.