Gabriel Gonzaga - The Return of "Napao"

“I want to see the crowd going crazy when I am walking to the cage. I want to let them know that I will be fighting for them." Gabriel Gonzaga 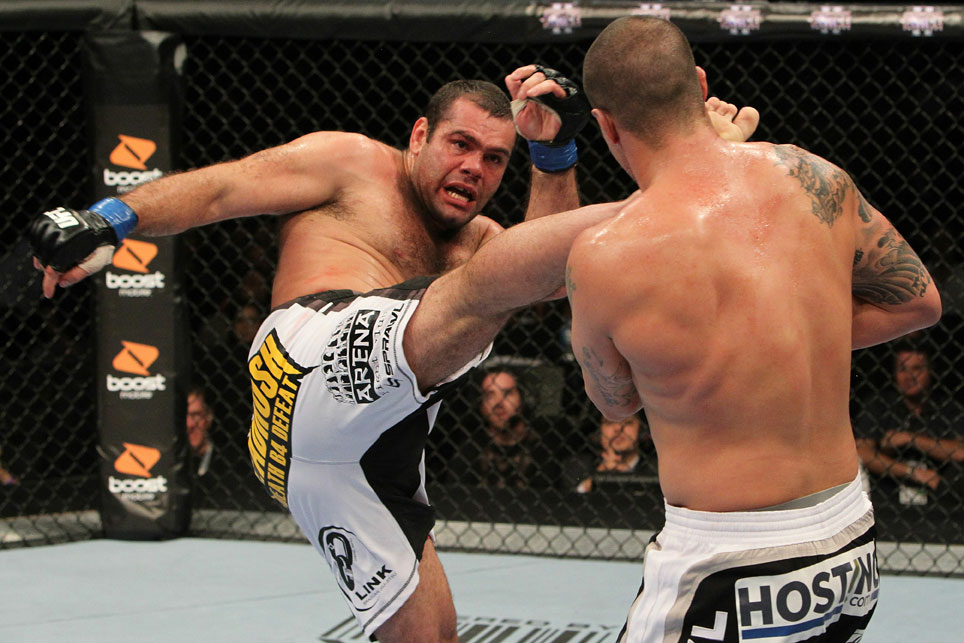 If anyone had earned a vacation from mixed martial arts, it was Gabriel Gonzaga. For years, the heavyweight standout had fought a wide selection of the best heavyweights of this era, from Randy Couture and Mirko Cro Cop to Shane Carwin and Junior dos Santos.

He won some, lost some, and challenged for the UFC heavyweight crown over the course of nearly five years in the Octagon, but after a UFC 121 defeat to Brendan Schaub, his third loss in four fights, he was released from the organization, and many believed he had fought for the last time.

On October 28, 2010, Gonzaga, a married father of two, tweeted “Official now - Out of UFC - Thanks for all your support - back to normal life and BJJ forever.”

More than a year later, when asked about that time and the idea of retirement, he says, “Yes, I was thinking about it, but I also knew that I have more fights in me.”

Almost immediately, Gonzaga was back in the gym, not training for a fight, but teaching and working with his students in the finer points of Brazilian Jiu-Jitsu.

“I never stopped training,” he said. “I run my school in Worcester, Massachusetts and I train daily with my students and I have fun doing it.”

But the itch was already starting for the Rio de Janeiro native, and that wasn’t a surprise, considering that he was only 31 at the time (prime for a heavyweight), and that his six losses had only come against the elite of the sport. There was definitely another title run in his body, and even though a comeback was on the lips of everyone he ran into, he wasn’t ready to pull the trigger until February of 2011.

“I was training regularly and my students and my family were all the time asking me when I was going to come back because they want to see me fighting,” Gonzaga recalled. “It was definitely a lot of motivation. So I went to corner a teammate, Alexandre Moreno, at some fight at Mohegan Sun Casino and (coach and friend) Marco (Alvan) joked with me and told me to watch the heavyweight championship match because I was going to fight the champ. I told him go ahead and set it up.”

Alvan looked at his friend quizzically.

“Yes, man, I am ready to come back,” replied Gonzaga.

Just like that, “Napao” was back in the fight business, and on October 8th of last year, he was matched up with Parker Porter, the winner of the fight that Alvan had wanted him to watch earlier. Gonzaga won the bout, submitting Porter in the third round at Mohegan Sun.

“It was great,” said Gonzaga, who upped his record to 12-6 with the victory. “The event was about one hour from my school and it was the first time that I fought around here. We estimate over 600 people from my team went to that fight and I appreciated the opportunity that they gave me to fight for the belt.”

There were bigger fish to fry though, and the question was whether Gonzaga would have to continue to work on the local circuit to earn a return call to the UFC. But when England’s Rob Broughton was forced out of his UFC 142 bout against Ednaldo Oliveira due to injury in December, Gonzaga didn’t have to answer that question, as Alvan got a call from UFC matchmaker Joe Silva asking if the big man from Ludlow was ready to step in on short notice.

“I was happy for sure,” said Gonzaga. “I got a call from Marco and he asked if I was ready to have another big run starting at UFC Rio and I jumped on it. I felt that I never left the UFC. It was a matter of time for me to refocus on my MMA career and I appreciate Joe Silva having me back.”

As a bonus, Gonzaga will be fighting in his hometown for the first time since his second bout against Branden Lee Hinkle in 2003, and he can’t wait to walk out of the tunnel at HSBC Arena and hear the roar of the crowd – his crowd.

Salvador’s Oliveira will not be an easy mark. He has a height advantage over the veteran, he has yet to lose in MMA, and he’s been the lead training partner of current heavyweight champion dos Santos, who knows a thing or two about Gonzaga from their 2010 bout.

“He presents a lot of difficulties,” said Gonzaga of the 13-0-1 (1 NC) Oliveira. “He is a tall guy, has great boxing skills, and comes from a great camp. But I believe I have more time there and I think I will impose my game.”

In addition to his advantage in world-class experience in the UFC, Gonzaga believes that he comes equipped for his second trip to the Octagon with a new level of maturity.

“I believe I am the same fighter but more mature,” said Gonzaga, who trains with Alvan and the rest of Team Link, which includes another UFC 142 returnee, Ricardo Funch. “I know where my strengths are and I will capitalize on it. I think I am still improving in all aspects and we will see a “Napao” even more hungry for knockouts and submissions.”

From a short retirement to a UFC return, it’s been a wild 15 months for Gabriel Gonzaga, but now that he’s back, he wants to make it as if he never left.

“You know that I am a fighter that respects the fans so much, and we are all here because of them,” he said. “In 2012 my fans can expect a focused Gonzaga, very well-trained and with a mindset to give them great performances, and I want to have another big run in the UFC starting in Brazil.”