"My fans can expect a warrior in the Octagon and I want to finish this fight." - Gabriel Gonzaga 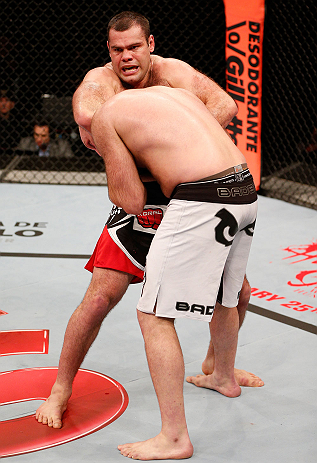 By the time Gabriel Gonzaga lost to Brendan Schaub in October of 2010, it was assumed that we had seen the Brazilian heavyweight’s best days. Sure, he was only 31, a prime age for a heavyweight, but when your resume includes battles with Randy Couture, Mirko Cro Cop, Fabricio Werdum (twice), Shane Carwin, and Junior dos Santos, it can have a way of aging you in the athletic sense.

So Gonzaga, a family man with a healthy teaching career with Team Link in Massachusetts, walked away from the game for nearly a year, recharging his batteries before the itch to compete came back.

“After taking some time off to take care of some business and expand Team Link with our association program, I could refocus on my fighting career and have another run for the belt,” said Gonzaga, who returned in a local New England show against Parker Porter, submitting his foe in the third round. He wasn’t back in the form that saw him sail to the top of the division in 2007, but it was a start, and it also earned him a UFC bout against Ednaldo Oliveira in January of 2012.

Not only was it Gonzaga’s return to the UFC, but it was his first bout at home since 2004. For anyone else, that would be an unbearable pressure to deal with, but not for “Napao,” who took less than four minutes to submit Oliveira.

“We have pressure all the time, but I am doing this long enough to manage it well,” he said. “So it (fighting at home) was great. I could fight in front of my family and friends and it gave me even more motivation. It was a great experience.”

More importantly, it announced Gonzaga’s return to the UFC heavyweight picture, and though injuries would keep him out of action for a year, his next bout in January of this year (also in Brazil) was even more impressive than the previous one, as he submitted Ben Rothwell in the second round.

“I believe that I belong in the top ten and I want to be there,” said Gonzaga, who is back in action this Saturday against Travis Browne. A big win and the 33-year-old vet will likely get his wish of being in the top ten again, but he knows he’s in for a battle in Las Vegas.

“He is a good fighter,” he said. “Tall, fast, powerful, and with a great camp. But I am very well prepared for it. I had an awesome training camp, I’m injury free, and I want to put a great performance against Browne. My fans can expect a warrior in the Octagon and I want to finish this fight.”

It’s something you may not have expected to hear in 2010, but two and a half years after the Schaub bout, and over seven years removed from his UFC debut against Kevin Jordan in 2005, Gabriel Gonzaga is still standing and still ready, willing, and able to make another run at the heavyweight crown.

“I started in the UFC in 2005 and I’ve enjoyed it a lot and am still having fun,” he said. “I think I am having a great moment and I want to have another shot for the belt.”