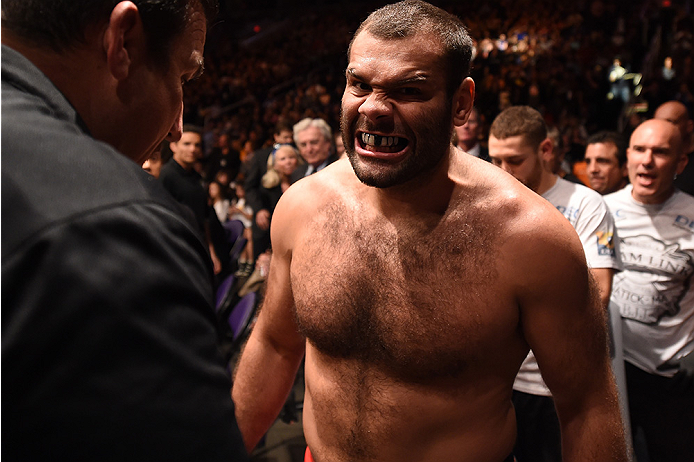 It was the year everything changed for Gabriel Gonzaga. Whether he wins another 20 fights or loses another 20, he will always know that if not for a singular moment in April of 2007, none of it would have been possible.

With a 7-1 pro record, three of those wins coming in the UFC, Gonzaga was a heavyweight prospect facing a legit superstar and contender when he was selected to face Mirko Cro Cop at UFC 70 in Manchester, England.

“He was the champion from PRIDE and he arrived in my division and was the best in that division at the time,” Gonzaga recalled.

It was the UFC’s first event in Europe since UFC 38 nearly five years earlier, and a big deal when it came to the promotion’s international expansion plans. So the heavyweights were center stage, with Croatia’s Cro Cop expected to secure a shot at then-heavyweight champion Randy Couture with a victory over Brazil’s Gonzaga, who was solid, but unspectacular, in his UFC wins over Kevin Jordan, Fabiano Scherner and Carmelo Marrero.

Cro Cop, on a five-fight winning streak, didn’t light the UFC world on fire with his debut Octagon win over Eddie Sanchez two months earlier, but most chalked that up to him getting acclimated to his new fighting environment.

This fight against Gonzaga was going to be different. And it was. It was a disaster for Cro Cop, who got taken to the mat and beat up before a restart by referee Herb Dean late in the first round set the stage for the head kick heard ‘round the world. It was a flush right kick to the head that knocked Cro Cop out and introduced Gonzaga not just to the elite of the heavyweight division, but to a new life.

“My life changed a lot,” Gonzaga said. “After that I could stop work and become a real pro fighter and just train to fight. It was a hard time in my life because of a lot of change, but it was great.”

Gonzaga would get Cro Cop’s title shot against Couture in August of 2007, giving a good account of himself before getting halted in the third round. Over the next several years, “Napao” carved out a nice life for himself and his family in Ludlow, Massachusetts, winning some, losing some in the Octagon, but all the while teaching his first love of jiu-jitsu and becoming what he always wanted to be - a professional.

After a brief hiatus from the UFC, Gonzaga returned home in 2012, and has since compiled a 4-3 record with four finishes. But it was a call that he received after his most recent fight in December against Matt Mitrione that surprised him, one that contained an offer for his next bout, a headlining gig against Cro Cop this Saturday in Krakow, Poland.

It is. It’s not 2007 anymore, and Cro Cop and Gonzaga aren’t knocking on the door of a title shot, but both have fight-ending power, both are at similar stages in their career, and while a win allows one to stay alive in the heavyweight sweepstakes, a loss could be very costly, especially for Cro Cop, who has longed for a shot at redemption – not just against Gonzaga, but for his entire run in the UFC.

The 35-year-old Gonzaga is well aware what’s at stake for his opponent, who he still considers to be a serious threat.

“He’s still danger in his strongest point, that is the high kick,” the Brazilian said. “If you mess up the timing, he’ll kick you.”

Then again, Gonzaga has proven to be pretty adept with the high kick as well. But how is he dealing with the prospect of his first fight in Europe since his 2008 loss to current interim champ Fabricio Werdum and of being the center of attention in this weekend’s main event?

“I don't do much different, I just do my work and train hard for the fight,” he said. “I don't have many goals to be popular; I just want to be the best in what I do and make money for a better future for my family.”

You can’t argue with that, but don’t think that Gonzaga isn’t hungry for a little glory. A win over Cro Cop guarantees another big fight, and if he wins again, another, and, well, you get the picture. In other words, he plans on sticking around a while.

“I’m where I’ve always been,” he said. “In the biggest event on Earth, and for 10 years I’ve been between the top 10 and 20, and I’m hoping to be number one someday. I’m a fighter that has always given my all to the fans inside the Octagon. My best sometimes is not what people expect, but it is my best.”