After Dropping His UFC Debut, Gabe Green Is Out To Show The True Version Of Himself At UFC 258
By Thomas Gerbasi, on Twitter: @TGerbasi • Feb. 12, 2021

Gabe Green’s mother wanted him to be a doctor. He had other plans, even though he did start out in the pre-med program at Cal State Long Beach.

“I always talked about wanting to be a doctor,” Green said. “I always had really good grades in school, so I was on my way to be a doctor when I fell in love with fighting.”

Considering that Green is making his second UFC appearance on Saturday night in Las Vegas against Philip Rowe, you know where this story is heading.

San Pedro’s Green started training and got hooked on mixed martial arts, and when scheduling conflicts hit around the time to pick classes for an upcoming semester, he made his mind up.

“I couldn't get into the classes I wanted, and I was like, 'Man, I kinda just want to fight anyway,'” he recalls. “My mom was like, 'No, be a doctor. What are you doing? You're throwing your life away. You're gonna bash your brains in and lose them.'” 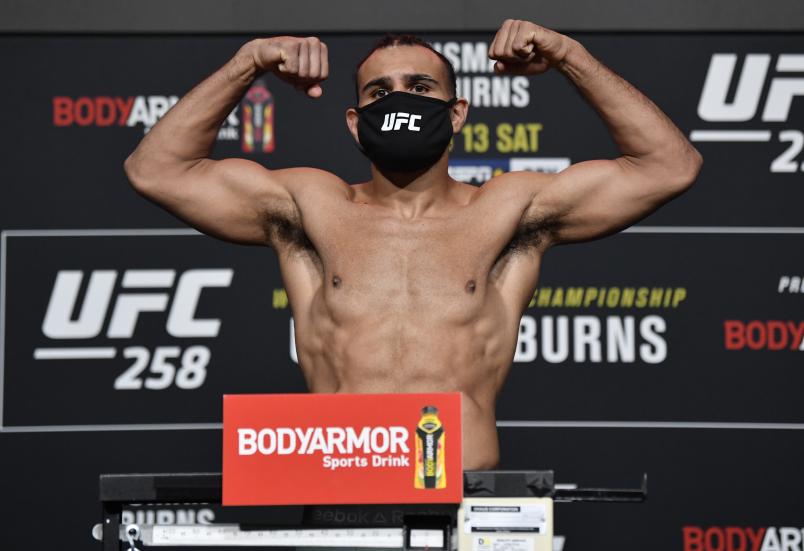 abe Green poses on the scale during the UFC weigh-in at UFC APEX on February 12, 2021 in Las Vegas, Nevada. (Photo by Jeff Bottari/Zuffa LLC)

It’s exactly what you would expect a mother to say, and Green knew it, so mom and son talked it out, and eventually, there was a compromise.

“She said, ‘At least get a degree,” so I got a degree in economics because those classes were empty,” Green laughs. “No one wanted to be an economist. ‘All right, I'll take those - that's my quickest way out.’ And it allowed me to focus on the whole fighting thing.”

Green got his degree, and mom was happy. Plus she got her wish for some medical professionals in the family, as Green’s brother is a nurse and his sister is studying to become one.

“I was the black sheep,” he laughs. “Everyone else out there trying to help people, and I'm over here hurting them. It's a good balance.”

More UFC 258: Gillian Robertson Won't Back Down | Belal Muhammad Looking To Break Through At UFC 258 | Kelvin Gastelum Is Fight For More Than Just A Win | Alexa Grasso Is Embracing The Spotlight | Miranda Maverick Is Only Here To Be The Best | View Green's Athlete Profile

These days, mom and dad are on board, and the 27-year-old counts them as his “number one fans.” And why wouldn’t they be? Not only is he their blood, but when he’s on the card, exciting fights usually follow. That was certainly the case last May, when “Gifted” Gabe stepped up on four days’ notice to go three hard rounds with Daniel Rodriguez before losing a decision.

That was impressive enough, but there’s more to his debut than that. 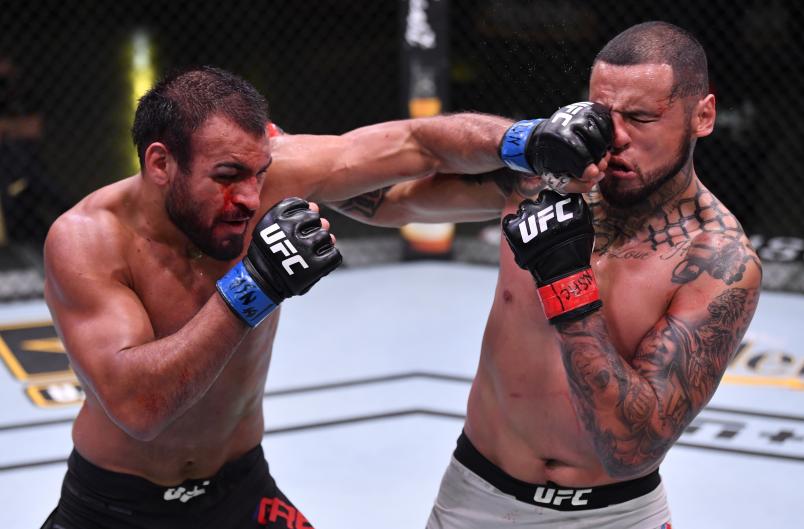 Gabe Green punches Daniel Rodriguez in their welterweight fight during the UFC Fight Night event at UFC APEX on May 30, 2020 in Las Vegas, Nevada. (Photo by Jeff Bottari/Zuffa LLC)

“It was four days' notice, and besides that, I hadn't fought in two years and hadn't really trained at all,” he said.

A winner over Richard LeRoy in August 2018, Green was scheduled to fight none other than Daniel Rodriguez four weeks later until he was forced to get hand surgery followed by shoulder surgery. After recovering, he got a call for a January 2020 fight but had to withdraw from that one due to a rib injury.

UFC 258: Kamaru Usman Is A 'Whole Different Savage' | A Blessing In Disguise For Gilbert Burns

“I took a month off for that to heal and then I think I had three weeks of training in before COVID happened and shut down our gym,” he said. “I kept running and stuff, but in two years, I had like six weeks of training in total scattered throughout before I got off the couch and fought Daniel Rodriguez.”

Yeah, no doctor is going to accept that assignment, but a fighter would, and did.

“I just went out there and I tried to fight the best I could,” said Green. “The only thing I could do is go out there and fight. I'm not gonna be like a little punk; I'm gonna go out there and try to win and try my best. And I did - I left everything out there, but it definitely wasn't me at my best. Knowing that even with all that, I went to a decision with a guy who was knocking everybody out at welterweight, I was like, you know what, I deserve to be here.” 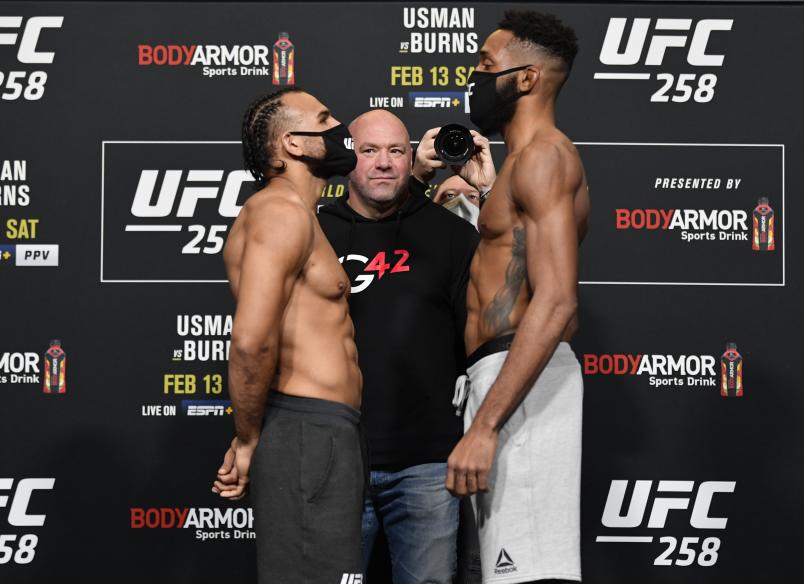 Opponents Gabe Green and Phil Rowe face off during the UFC weigh-in at UFC APEX on February 12, 2021 in Las Vegas, Nevada. (Photo by Jeff Bottari/Zuffa LLC)

He does. And with a full camp behind him, he will look to improve his 9-3 record against Dana White’s Contender Series graduate Rowe. It’s a fight with the potential for fireworks, but all Green is thinking about is winning.

Losses suck. And they leave a terrible taste in your mouth, and the only way to get it out is by winning. So I've been kind of bitter since, so it's gonna feel real good to go in there and get a dub.

“I'm really fired up from the last one,” he said. “You have to have a short-term memory and be like, 'all right, back to work.' You can't just dwell on things. And that's what I've done. I'm not gonna go in there scared or anything, like, 'What if I lose again?' I've used that loss as a fire. I lost once in the UFC, and that's all it's gonna be. It's all wins from now on, pure dubs.”

If he keeps to that promise, that economics degree is gonna come in handy.

“You know what?” he laughs. “It makes sense. It's gonna teach me what to do with my money, for sure. I'm gonna be able to look at the whole thing differently and make sure that I don't screw up the stuff that I get.”