The Future Is Bright For Yancy Medeiros

Yancy Medeiros Is Feeling All The Good Vibes Heading Into UFC Fight Night: Font Vs. Garbrandt
By THOMAS GERBASI, ON TWITTER @TGERBASI • May. 20, 2021

When it comes to positivity, Yancy Medeiros is in the one percent of those always seeing the glass as half-full.

Enter 2020, a year that tested even the most optimistic of souls. Add in a three-fight losing streak and Medeiros had to take a long look at where he was at. When it was over, he could smile again.

“This whole last year put a lot of perspective into people, and for me, too,” Medeiros said. “I feel like last year put a lot of people in dark areas for themselves, wherever it was. It put me in a dark area with a lot of things, but I learned to love myself, so when things come my way, I'm very grateful for it and I try to take advantage of that instead of take light of it and let it pass. Last year really taught me that.”

Those weren’t easy lessons to learn, especially since whatever is happening to us is always the most important thing to deal with first. But as the COVID-19 pandemic raged, Medeiros quickly realized that whatever was going on with him wasn’t as bad as what others were dealing with.

“You ever heard that quote, ‘I used to complain about not having shoes until I met a man with no feet,’ he asks. “When you have that perspective, people are talking about COVID and masks, I'm like, people in India are dying, thousands a day. Everybody goes through their hardships and all that, and I'm dealing with the same thing, but watching what went on outside with the world and all this chaos, the last thing I need to be is chaotic with myself or mad and negative to anybody else. I just gotta keep grinding, keep being positive. Every time I felt like there was hardship or negotiations didn't turn out right, I just looked outside or I watched TV and there were people dying outside. Let's put things in perspective here and stop being so mad about your first world problems. We can make this work. I'm grateful I have a lot of support around me, a lot of love, a lot of people who are there for me.”

"No room to complain, only room for progression."@YMedeiros is happy to be back in action at #UFCVegas27. Hear what he had to say before his bout with Damir Hadžović 🔊⬆️ pic.twitter.com/jpDn4iOE4R

By the end of the year, Medeiros was ready to fight, and he’ll get that chance this Saturday when he meets Damir Hadzovic. And the fighter showing up in Las Vegas isn’t the same one that dropped three straight to Donald Cerrone, Gregor Gillespie and Lando Vannata. No, this isn’t Yancy Medeiros 2.0, it’s Yancy Medeiros remastered.

“I just gotta get in there and be like I was when I had a chip on my shoulder when I first got to 170,” said Medeiros, who ran off three consecutive wins at welterweight in 2016-17 before the loss to Cerrone prompted a move back to 155 pounds. “Not a bad chip, but I had nothing to lose. Then I started getting too analytical with myself. Watching my fights, I'm like, I'm just waiting too much. I gotta trust my gut, not my brain. My brain will get me into the positions, but my gut is gonna get me where I need to be.”

That reliance on his gut has led to some dominant wins at lightweight and the trio of victories over Sean Spencer, Erick Silva and Alex Oliveira at 170 that resulted in two finishes, a Performance of the Night bonus and a Fight of the Night with Brazil’s “Cowboy” that was one of the best fights of 2017.

“Everybody knows what I'm capable of and I'm gonna show the world again that I am that Yancy that everybody likes seeing in fights,” he said. “It's kill or be killed and I gotta show that. It's the only thing I can show. I've been losing, brah. (Laughs) I hate losing more than I like winning.”

Losing is a part of this sport, or any sport for that matter. Someone wins, someone loses. But often, how someone loses can cause sleepless nights and endless questions. Oliveira probably slept like a baby after his fight with Medeiros because he knew he left it all in the Octagon in search of victory. Medeiros has had those fights too, but not in his last three. After each defeat, he had questions. Now, he finally has the answers. 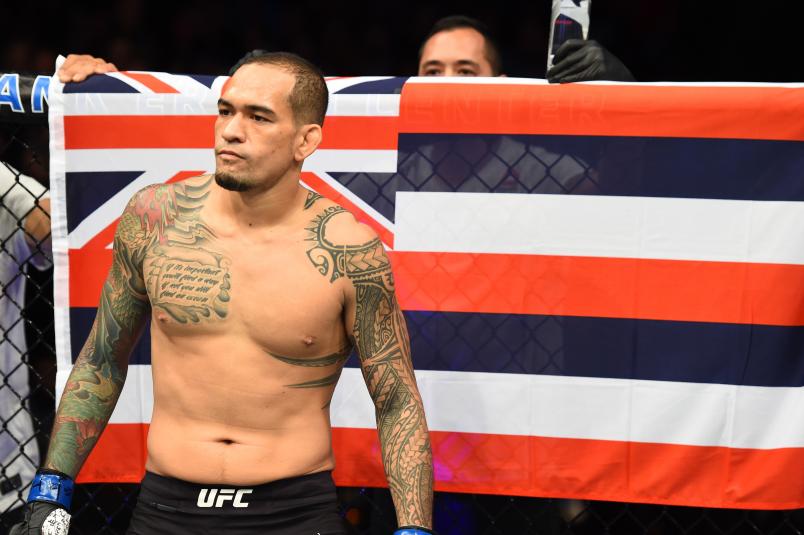 Yancy Medeiros stands in his corner before facing Donald Cerrone in their welterweight bout during the UFC Fight Night event at Frank Erwin Center on February 18, 2018 in Austin, Texas. (Photo by Josh Hedges/Zuffa LLC)

“I don't blame anybody else but myself for my performances,” the Makaha native said. “The frustration is more in myself, knowing that I'm better than that. Why am I having these woulda, shoulda couldas? When I fought Oliveira, even if I came out with a loss, I gave everything I could during that fight. But these last fights with Gillespie and Vannata, I didn't. Even the Cowboy fight, I felt I still could have continued. But I let the judges and the referee dictate that. You can't let that dictate it. I hate decisions and I hate looking like I need help or need the ref to step in and save me. Because I definitely don't need that.”

It's the Hawaiian “just scrap” mentality taken to the next level, something the 33-year-old has always taken pride in. It’s just who he is, making you wonder where he would be without martial arts.

“I never pictured not doing it,” Medeiros said. “Martial arts has been my longest relationship I committed to. I've been doing it since five, as long as I can remember doing it, and I'm still doing it today and I'm able to take care of my responsibilities. I know I was put on this Earth to make things better and to entertain. If it ain't in front of the camera and fighting, it's going to be connecting with somebody and living a grateful life. We'll figure that out later, because right now, even though I've been in the darkest places, this is the most joyfulness I've had in my life. I'm able to live like a kid. When a kid wakes up, they're just happy. They just want to be happy.”

Yancy Medeiros is happy. That’s usually his default mode, but it’s even more apparent today, when May 22 begins the next chapter of his life. So all good, then?

“No complaints,” he said. “I woke up on an island, not hungry, not cold. It could be worse.”

Medeiros laughs, knowing that he’s back where he belongs.

“When you learn to love yourself in a dark place, when light comes, everything else is very bright for you, and I feel like that's what 2020 has done for me, and I'll show that May 22nd,” he said. “It's time for me to shine again, implement my brand and get back on a winning streak. I ain't here to complain, I'm here to represent and entertain. The wait is over.”