"People should expect me coming
in on a full camp, leaving no stones unturned, and ready to fight a hard
three rounds against a very tough individual." - Tom DeBlass 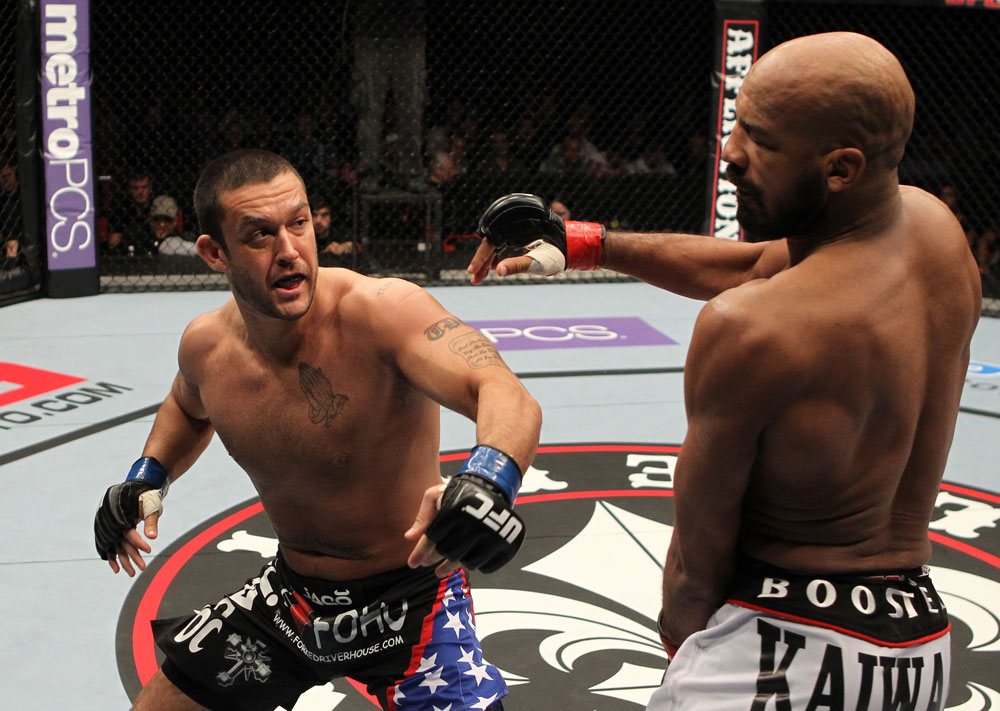 The first five minutes of Tom DeBlass’ UFC debut went remarkably well, considering that he had taken the April 2012 bout with Cyrille Diabate on just 12 days’ notice. The next ten? The New Jersey native knew those were going to be a problem.

“After I dominated the first round, I came back and I was tired,” said DeBlass, a Brazilian Jiu-Jitsu black belt under Ricardo Almeida who was still able to get the fight to the mat early in round two. “I caught the kick and took him down right away and I was tired that second round. And when the tables started turning, you’re trying to tell your body to work and it’s just not working. And going into the third round, to be honest, I wasn’t really thinking too clearly because I got hit with a couple good shots in the second round. I’m trying to figure out ways to win, but I’m basically thinking ‘please God, help me to win this fight, but it sucks right now.’ It’s probably the worst feeling in the world that you can experience, being that exhausted. But it makes you a better man afterward.”

When the 15 minutes of the light heavyweight bout were up, the veteran Diabate had a majority decision win over the newcomer, DeBlass. It was the 30-year-old’s first defeat in eight pro fights, but that’s sometimes the price you pay for having a fighter’s blood. For DeBlass, who was unbeaten on the local Jersey circuit, continuing his recovery from a fractured ankle and not having a full training camp (which for him is usually three months) wasn’t enough to keep him from stepping into the Octagon on short notice, consequences be damned.

“When the UFC calls, you answer, and I was just so excited to get the call, I wouldn’t take it back for the world,” he said. “The UFC is the top organization, and that’s where all the top fighters want to go. And of course that was my main goal.”

It was a goal that came fairly quickly for DeBlass, who turned pro in June of 2010, but for those who followed his career in the Ring of Combat promotion that had launched several UFC careers, including that of his training partner Frankie Edgar, it was something that came right on time, if not a little late.

“I think because I’ve competed so much in jiu-jitsu at a world-class level before the UFC, I think people wanted to rush me in a little bit more, and in Ring of Combat, everybody I competed against locally – let’s note, everyone I had a full camp against – I dominated clearly, and I really had no points in any of my fights before the Cyrille fight where I’ve really been in a bad spot,” he said. “So I think people are like ‘man, get this guy in there already.’ But I didn’t think too much about it. I try to be focused, but it’s always in the back of your head. I knew that call was coming, and it’s just trying to be as ready as possible for when it comes.”

And facing a kickboxer like Diabate, DeBlass figured that even with the short notice and a trip overseas to Sweden, he would have enough to pull out the win, especially if the bout hit the mat. It didn’t happen, but he took some valuable lessons out of the bout.

“My back was against the wall and it was the first time I was put in some real bad spots, and now I know what it’s like to get my face smashed with elbows, and you’re really not gonna find a bigger fist than Cyrille’s fist,” he chuckles. As for the first-time UFC jitters, he’s not buying it.

“I don’t believe in the fight jitters,” said DeBlass. “It’s a fight and you’ve gotta make it happen. You either don’t or you do, and I can never use that as an excuse. Whether it was my first fight or my 51st fight, a fight’s a fight. Diabate put on a great show, he fought hard, and he showed a lot of skill and avoided some bad spots, and he was the better man that night. I’m not gonna sit here and say anything different.”

What DeBlass will say is that things will be different the second time around. For starters, his November 10th bout with Riki Fukuda in China is at 185 pounds, not 205, and he’s had a full camp to get ready for the Japanese standout, who is someone DeBlass wanted to square off against.

“I actually wanted to fight Riki,” he said. “No disrespect to him, I think he’s a monster, and that’s one of the reasons I wanted to fight him. I think a lot of people, if they’re going off that first fight, they’re sorely misled in who I am as a fighter. And Riki was one of the guys that was coming off a loss that I really wanted the opportunity to compete against. I’m very impressed with Riki’s heart and his ability to really compete through bad times and fight when things get tough. He does a great job in just grinding through, and I just thought it would be an honor to get in there with him and I feel I have kind of the same mentality and I think this fight’s gonna be one that people remember.”

Coming off a three round decision loss to Costa Philippou in July, Fukuda is one of those fighters you just can’t get rid of, and one almost destined to give his opponent a 15 minute battle every time out. To actually want to fight him shows you where DeBlass’ head and competitive nature is at, and while he has a laundry list of accomplishments in grappling, he also has some Mark Henry-tutored standup that he hopes to show off next month. In fact, he promises a better than ever fighter in all aspects of the game.

“I think a lot of people are underestimating me and thinking I got here really fast,” he said. “That’s fine. But all I know is that I have a great respect for Riki Fukuda, he’s been around for a long time, I’m very excited to fight with him, and people should expect me coming in on a full camp, leaving no stones unturned, and ready to fight a hard three rounds against a very tough individual. I can’t guarantee victory, and I never do, but I guarantee heart, I guarantee balls, and I guarantee that I’m coming into this fight in great shape. You’ll see a much better version of me.”