"It’s good to compete against somebody that loves competing and who has the same passion for martial arts as I do." - Court McGee 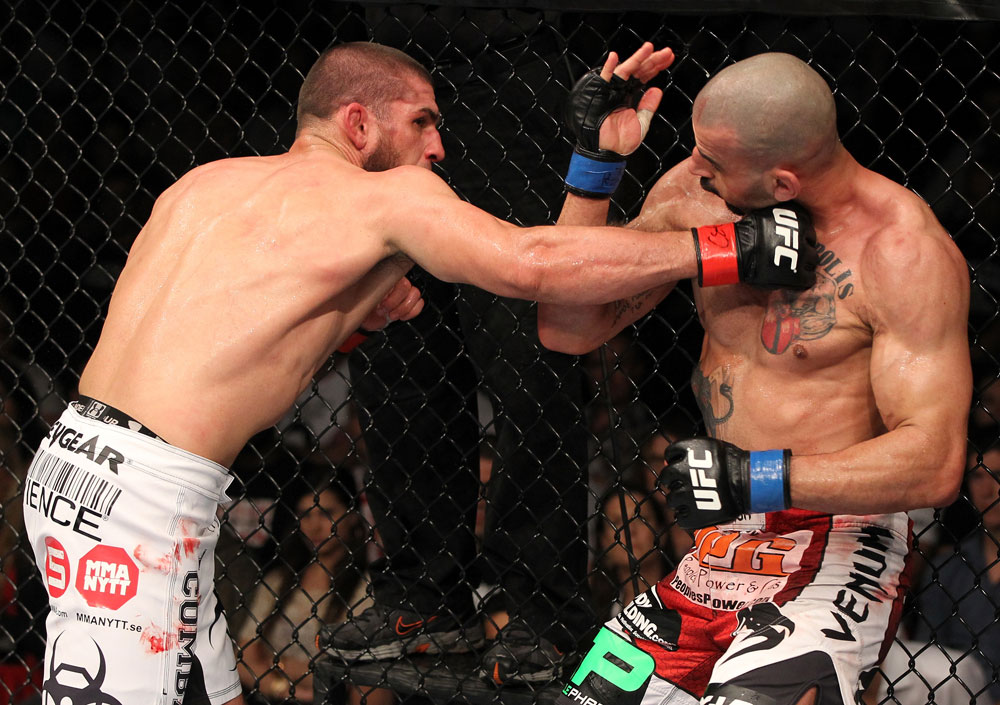 Nothing went as Court McGee had planned leading into his last fight. Things didn’t play out as he had expected once the cage door closed either, and the combination of the two has the former Ultimate Fighter winner irritated, but intensely focused as he readies to make his return to the Octagon this weekend at UFC 149.

“I let myself down. I don’t have anybody to blame other than myself on the business side,” McGee began. “I’m a fighter and I love fighting, but it got to a point where I didn’t want to fight; I wanted to try and figure out the business side, and do this, do that. Then I got to the point where I was like, `S**t – what am I doing this for?’ I lost track of why it is that I love to step into the cage and fight guys, and I found that again. You can’t explain it really, but I’ve got it.

“I was so disappointed after the fight because I let myself down; I didn’t cut him off as well as I can,” added McGee, turning his attention to another source of frustration – his March loss to Costa Philippou. “But we’re not in a square ring, so you can’t corner a guy, and it’s hard to put somebody on the cage if they’re running. It’s just one of those things that are frustrating, and there have been two or three fights that have been like that.

McGee has built his reputation on being a fighter who is hard to put away; a well-rounded mixed martial artist whose greatest strengths inside the cage are his conditioning and heart. He’s earned the adoration of fans for his entertaining back-and-forth fights, both during his time on The Ultimate Fighter and since winning the middleweight competition on Season 11 as a member of Team Liddell.

He feels like he didn’t get the opportunity to give that to the fans in Australia back in March, in part because of an illness that plagued him in the weeks leading up to his fight, but also because of the strategy Philippou employed. It’s one that we’re seeing utilized more often, a trend that worries McGee.

“Look at it in the Clay Guida fight; same thing,” McGee offered, referencing the lightweight’s recent split decision loss to Gray Maynard that saw Guida attempt to use an uncharacteristic stick-and-move approach to counter Maynard’s size and strength advantages. “If they had given Clay Guida the fight, it would have been okay for you to run in this sport, when we get paid to compete; to fight. It’s not an amateur boxing match where I score once or twice and then see how fast I can run away; we’re out there to finish the guy. You’re out there to submit him or knock him out. So for two-and-a-half minutes when you run side-to-side and don’t throw one punch, what are you doing exactly?”

As much as the loss continues to frustrate him, McGee has turned the page, shifting his focus to Nick Ring, and using his experience in Australia to push him through a more rigorous and productive training camp heading into their meeting on Saturday night. Rather than use the illness that slowed him and Philippou’s game plan as an excuse that he lets hold him back, the 27-year-old southpaw is using them as another lesson learned on his journey as a martial artist, and fuel to deliver a better performance when he steps into the cage at the Scotiabank Saddledome this weekend.

“Yeah, I got sick, and I was on a s**t-load of antibiotics, and I lost a bunch of weight, and I didn’t have as much energy and strength as I usually would, but that’s part of it too. To be a martial artist, you take on a challenge. It’s not the winning or the losing – granted, everybody wants to win, and everybody is willing to work to win – but winning and losing is only a part of it. It’s the journey. It’s the experience. I took a lot from the experience, so it’s fueled the fire in me that I can’t explain to you, man.

The fight with Ring is not only a welcomed opportunity to face another fighter who likes to come forward and engage, but also a matter of unfinished business, as McGee and his upcoming opponent shared the cage during Season 11 of The Ultimate Fighter, with the Canadian earning a questionable two-round decision win over “The Crusher” prior to a knee injury eliminating him from the competition.

Most people believed the close contest should have gone to a sudden victory round, including McGee, who is looking forward to the chance to renew acquaintances with Ring on Saturday night.

“Another thing too is that he’s a true martial artist. I know Nick Ring, and I’ve talked to him since the show, and he’s a true martial artist. He’s a good guy, and I like competing against guys like that. And he takes it serious. I mean, most everybody in the UFC takes it serious, but it’s good to compete against somebody that loves competing and who has the same passion for martial arts as I do.”

Despite having a great deal of respect for his upcoming opponent, McGee plans on starting another winning streak on Saturday night, and has designs on doing so in impressive fashion.