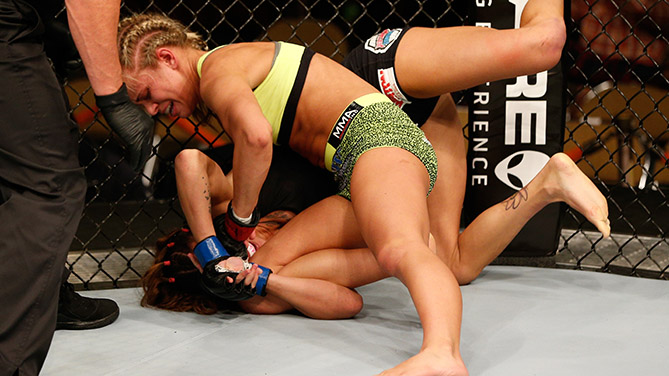 Paige VanZant may have received a lot of attention for her looks and her age, but the 20-year-old strawweight prospect has plenty of mean in her too, as she delivered a stellar performance in her Octagon debut against fellow newcomer Kailin Curran, stopping the Hawaiian in the third round of their UFC Fight Night prelim bout at the Frank Erwin Center in Austin, Texas. 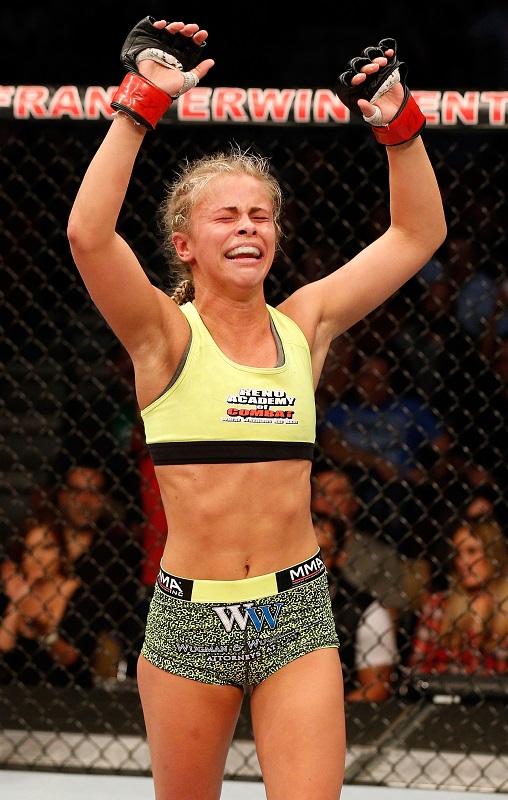 The strawweights engaged immediately, VanZant bulling Curran to the fence immediately. Curran landed an elbow and got loose, but they soon locked up again. Curran scored with a nice throw in response, but VanZant was undeterred, rising and again taking control at close quarters.
> Watch Replay on UFC FIGHT PASS
Curran’s second takedown came at the midway point of the round, VanZant working for submissions from the bottom. Curran powered out of three armbar attempts and also landed a few hard rights from the top, but by the end of the round, VanZant had swept her way out of trouble and nearly finished the fight with ground strikes.

VanZant went on the attack again to start round two, hoping to catch Curran napping, and fatigue was starting to become a factor.
Curran was able to stall the Reno product’s momentum with a timely hip toss in the second minute, but VanZant bounced right back up and went back to work against the fence. And while she dominated the majority of the round, Curran was able to get a late takedown to remind her opponent that she was still there.

Opening round three with a kick to the head, a clinch and a takedown, VanZant was relentless in her attack, steadily wearing Curran down. Midway through the round, VanZant threw Curran to the mat and opened up with strikes, prompting referee Kerry Hatley to step in and halt the bout at the 2:54 mark.

A single right hand over Puig’s left jab sent the Mexican to the deck, with a follow-up series of strikes finishing the night.