A Fresh Start for Rick Story

"I’m just worried about getting the W, but when I get in there and I
get hit, some composure goes out the door and all of a sudden I turn
into me." - Rick Story 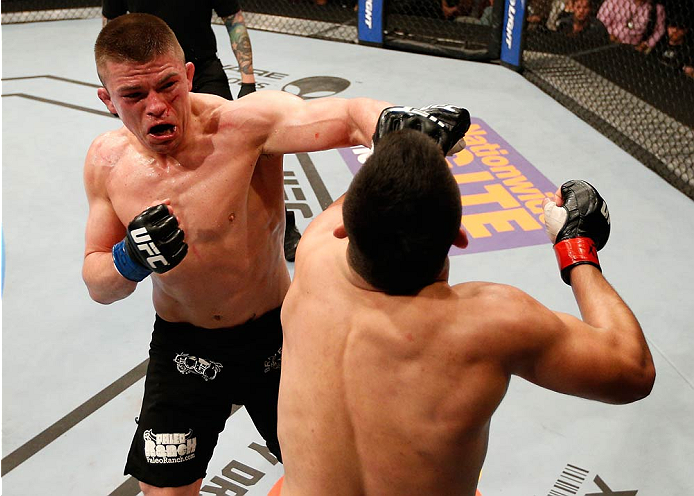 Examining Rick Story’s UFC career thus far, two attributes that stand out are his toughness and his ability to go hard against top-level foes. Yet when Story looked at his fights, he only rarely saw those attributes. So after deciding to leave his longtime camp Brave Legion, his sights turned to a familiar face and a longtime acquaintance in former UFC lightweight champion Benson Henderson.

“Every time in Ben’s fights, he comes in and he’s in great shape and he’s really tough,” said Story. “So it was definitely something on my mind. Ben and me had wrestled in the same district in high school, and our colleges actually wrestled each other too, so we had known of each other for a long time and I got his phone number back when I first got into the UFC and we’ve stayed in contact here and there. So when I ended up leaving, coming down here and training here was one of the options that I was going to try out.”

Here is the MMA Lab in Glendale, Arizona, a spot rapidly becoming one of the ‘go to’ gyms in the sport thanks to the presence of Henderson, coach John Crouch, and a hungry group of fighters that not only push each other, but that are there for each other. For Story, it’s been a perfect fit at time when he needed it most, not just physically, but mentally.

“It’s just crazy how big the mental part is, for me at least,” said the 29-year-old Washington native. “It’s like I was walking under a rain cloud for the last seven years, and just getting away from that takes a whole lot of weight off my chest. Training has gotten fun again for me.”

Story + fun = bad news for prospective opponents, and tonight in Atlantic City, the recipient of the freshly motivated welterweight’s new attitude will be Brazil’s Leonardo Mafra. A member of the Ultimate Fighter Brazil season one cast, Mafra lost his UFC debut to Thiago Perpetuo in 2012 and was cut, but after going 5-0 with five knockouts on the local circuit back home, he was brought back to the UFC.

Now he’s in with Story, who is looking to get back on the winning track after a close split decision loss to Kelvin Gastelum in March. More importantly, Story needs to get the consistency he had when he ran off a six-fight winning streak in 2009-11 that included victories over Johny Hendricks and Thiago Alves.

Since then, his record has been a spotty 3-5, and while he’s looked like a top welterweight in wins over Quinn Mulhern and Brian Ebersole, other fights haven’t been as impressive.

“I would say there’s only been a few of my fights where I’ve been really confident with my conditioning and my ability to go really hard for three rounds,” he said. “And I performed really good in those fights. I feel like I’m in great shape right now. I was in good shape for the Ebersole fight, but I also had the confidence that I could go hard because of the partners that I had. It was a different camp and they were smarter about things. Down here it’s really smart too. They’ve got a good setup and a plan that they follow.”

For the Ebersole fight last November, Story trained in Montreal with the Tristar camp, and this time around he’s with Henderson and company in Arizona. Given his success back then and the way he feels now, he does think about how things might have been different if he switched gyms sooner.

“I’m stepping back and looking at it, and if I had been at a different camp I probably would have elevated my game a lot faster and I would have stayed more consistent,” he said. “Things happened for me pretty quick. I got into the UFC after only ten months of training for MMA, and I was thrown into the deep end. It was a difficult time in my life, and now it’s completely different.”

A UFC vet since 2009, Story has grown up in the Octagon, with all the requisite bumps and bruises that come along with life in the big leagues. And despite having his share of hurdles to get over, wins over Hendricks and Alves (along with a pre-UFC victory over Jake Ellenberger) prove that he does have the talent to not just stay on the roster, but to make some moves in the coming years.

“I’m looking at this as a way to come out and reinvent myself,” he said. “If it (the Mafra fight) starts off slower, that’s fine with me, and by slower I mean that I come out a little more cautious,” he said. “I’m just worried about getting the W, but when I get in there and I get hit, some composure goes out the door and all of a sudden I turn into me. (Laughs) But this is definitely a way for me to reinvent myself.”

You can hear it in his voice; Story sounds a lot more at ease these days, and he seems to be finally enjoying the ride a bit. Funny what a change of scenery and some new faces can do for someone’s view of the world. That hardcore conditioning at the MMA Lab doesn’t hurt his mood either heading into what is a pivotal fight in his career.

“I’m confident on my feet, on the ground, and I’m just confident wherever I go right now because when I’m confident in my conditioning, I’m a completely different fighter from what I’ve shown.”