A Fresh Decade For "The Happy Warrior"

“The fans that I have are hardcore fans,” she said. “And I love them so much. I've gotten a lot of fan mail and a lot of well wishes and people in my corner and that's good enough for me."
By Thomas Gerbasi, on Twitter: @TGerbasi • Jan. 17, 2020

The end of decade retrospectives have died down, and that’s probably just fine with Roxanne Modafferi, who kicks off the new decade with a Saturday fight against Maycee Barber.

Ten years ago at this time, Barber was 11 years old and navigating grammar school along with her afterschool martial arts training. Modafferi was 27, living in Japan and already 18 fights into her pro MMA career. Women weren’t fighting in the UFC yet, but they were competing around the world, and Modafferi was busy logging bouts against Marloes Coenen, Shayna Baszler, Tara LaRosa and Megumi Yabushita. Maybe she wasn’t making noise in the States like women are today, but she was making a living and had earned the respect of the hardcore MMA fanbase.

Then the roof caved in.

“I just wanted to win my fights.”

The year started off well enough with a submission of Molly Helsel and a decision over LaRosa, but a knockout loss to Sarah Kaufman in a July 2010 Strikeforce bout began a six-fight losing streak culminating in a decision loss to Raquel Pennington in her UFC debut in 2013.

That defeat in her long-awaited first bout in the Octagon was a crushing blow for Modafferi, but the silver lining was that in the lead-up to the bout, she moved to Las Vegas for The Ultimate Fighter and met John Wood of the Syndicate MMA team. That was the turning point for “The Happy Warrior.”

“I had to move,” she said. “I joined The Ultimate Fighter and I moved to Vegas. I met John Wood at Syndicate MMA and he pretty much helped me turn my career around. I found a good physical trainer, Lorenzo Pavlica, and it was the people and the coaching that I needed to bring me back.”

Following the loss to Pennington, Modafferi went 6-2 and made it onto another season of TUF. This time she wound up in the finals on short notice and nearly became the first women’s flyweight champion in the UFC after engaging in a Fight of the Night battle with Nicco Montano in December 2017 that was a lot closer than the final judges’ scores would lead you to believe. 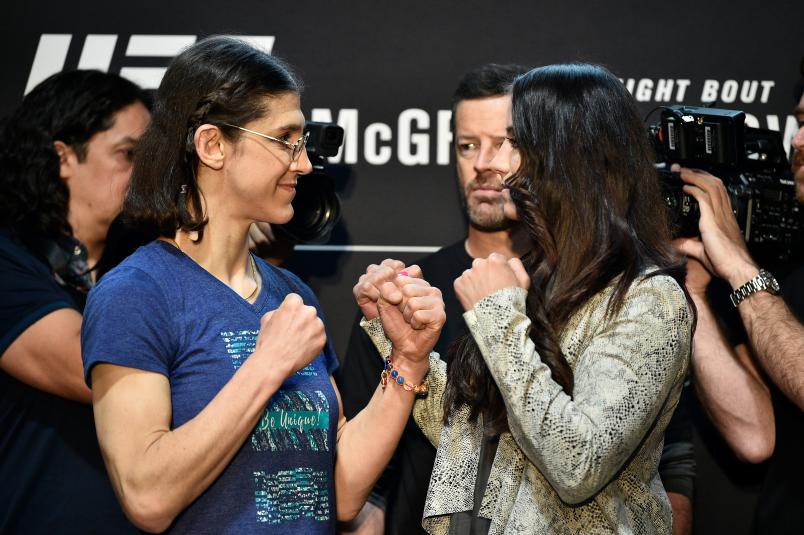 A little over two years later, she’s still here, a top ten contender who pinned the first loss on the pro record of Antonina Shevchenko last April. On Saturday, she tries to do the same thing to Barber, and while “The Future” is the favorite, Modafferi has those intangibles that can’t be overlooked. Not that Modafferi is using those as a security blanket come fight night.

“Nothing's really comfortable because anything can happen in a fight,” she said. “Despite her (Barber) being young and less experienced than me, she could absolutely take the victory, but I've been training very hard for this, I've improved a lot, I'm very motivated and I have the stuff necessary to win. I've got the weapons, I've sharpened them, so I'm very confident that I'll be able to take this win.”

The victory would be Modafferi’s third in the Octagon, a number that’s surprising given the fact that she’s compiled 23 wins over the course of the career that began in 2003. But for the first ten years of that career, women weren’t even fighting in the UFC. But Modafferi always had hope that she would one day fight in the promotion.

“That's always kind of been my dream,” said Modafferi, who ignited the diehard fan base that had followed her for years when she stopped Barb Honchak in 2018 for her first UFC win. Those fans have never strayed from her side, and Modafferi knows it.

“The fans that I have are hardcore fans,” she said. “And I love them so much. I've gotten a lot of fan mail and a lot of well wishes and people in my corner and that's good enough for me. I'm so happy to have them.”

Expect another internet breakdown should she upset Barber this weekend, and if that’s the case, Modafferi will be just as excited, if not more, as her fans are. So yeah, she’s not jaded by any of this after 17 years in the game.

“The only thing I'm jaded by is people missing weight,” said Modafferi, who has seen two of her last three opponents (Jennifer Maia and Sijara Eubanks) miss their mark on the scale. “Hopefully my next opponent won't miss weight. She's never missed weight at flyweight, so we're just gonna think positively and we're gonna have a good fight."