Fredy Serrano: Class is in Session 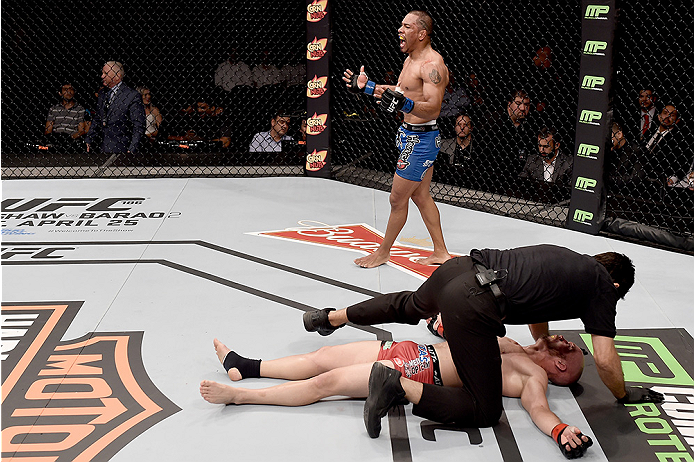 For most, another day at the office is humdrum and unremarkable.

For a former Olympian turned UFC fighter, another day at the office meant Fredy Serrano scored a Performance of the Night bonus in his Octagon debut.

“My mindset was to be prepared for a three-round war,” Serrano said of his March bout against Bentley Syler. “Go out there, do my job, follow my game plan and, finally, have fun. My feelings needed to be in complete harmony with my motivation, my fears and what I wanted to do. In a perfect balance, my thoughts were that this was something very important, but I had lived at this competitive level so many times in the past, so this needed to be another day at the office.”

The 36-year-old from Bogota, Colombia, known respectfully and affectionately as “El Profe,” made a huge statement to the UFC flyweight division with his third-round knockout of Syler in Rio de Janeiro, Brazil. The statement? Class is in session and the first lesson that everyone was taught - Serrano knows how to strike.

“My striking coach is a former kickboxing champion, the Colombian Orlando Benavides,” Serrano said. “I also have a background in taekwondo. I am training very hard with my head coach Pablo Hernandez, working on my MMA skills. I feel that people need to know that I’m full of surprises and that as a fighter I am multi-dimensional. At first, everybody was aware of my wrestling abilities. Now, they know about my one-punch knockout power and we will keep seeing what I can bring to the table in the future.”

Prior to his stint on The Ultimate Fighter: Latin America, Serrano was an internationally known and tested wrestler. Beginning at ten years old, he wrestled for 23 years before hanging up his shoes, with his career highlights being a bronze medal at the 2007 Pan American Games and representing Colombia at the 2008 Olympic Games. It’s probably safe to say he is the greatest wrestler his home country has known, but, actually, it was Serrano’s stand-up skills that stole the show back in March.

It did not take long either, as Bogota’s Serrano dropped “Dr. Bolivia” with his first punch - an overhand right - and things were off to the races from there. Fans of TUF LATAM know Serrano is one for a rumble, as he took home the Fight of the Season bonus in his decision loss to eventual season winner Alejandro Perez. The scrap with Syler was different, as a more calculating fighter picked apart his former Team Werdum squadmate with a wide array of punches and kicks. The final shot was a perfectly timed uppercut, which inspired sleep in Syler and the soothing feeling of success in Serrano.

Not to put the cart before the horse too much, but Serrano is a part of this trend of former Olympians becoming impressive UFC fighters. Whether it’s former UFC women’s bantamweight champion Ronda Rousey or current UFC light heavyweight champion Daniel Cormier, these Olympians are beyond specialists as wrestlers or judoka - they’re world class athletes both physically and mentally. Like the rest of this elite club, Serrano has prepared and performed at a level most of his UFC competition will never know, and El Profe is going to teach it to them inside the Octagon.

“[Olympians] all start very young, mostly, but we also all start from 0 and we really know the hard work since we were very young,” he said. “We built a sense of awareness of our needs, our preparation, our nutrition, our physical attributes and our mindset to be able to compete at the highest level with our best capabilities. I think I felt more pressure at the Olympics. Now, I learned to do it a little better. That day [his UFC debut] was my prize day because all the training camp was the real sacrifice, the real pain. The day of the fight, I was just having fun because this is the party.”

This Saturday at UFC Fight Night: Henderson vs. Masvidal, Serrano returns to the Octagon in a flyweight fracas on the other side of the globe in Seoul, South Korea, as he takes on Yao Zhikui. China’s “The Conqueror” has seen both sides of a split decision in his first two UFC appearances and, in May, The Ultimate Fighter: China alum earned his first Octagon win in a close fight with Nolan Ticman. With both flyweights ready to represent their respective nations and to move up the ranks, expect Serrano to make it another day at the office, which could mean another battle with a bonus at the end of it.

“I see in him (Zhikui) somebody that is eager to move forward and to show himself to the world, but, as I have said before, I always think more about the things I can do better than the things my opponent can do. I think it's going to be interesting to see two TUF contestants from different continents meet in the Octagon. I think people will get to see not only a clash between styles, but between game plans as well.”